Developing an Atlas of Harmful Algal Blooms in the Red Sea: Linkages to Local Aquaculture
Previous Article in Special Issue

During the past decade, imagery data acquired from unmanned aerial vehicles (UAVs), thanks to their high spatial, spectral, and temporal resolutions, have attracted increasing attention for discriminating healthy from diseased plants and monitoring the progress of such plant diseases in fields. Despite the well-documented usage of UAV-based hyperspectral remote sensing for discriminating healthy and diseased plant areas, employing red-green-blue (RGB) imagery for a similar purpose has yet to be fully investigated. This study aims at evaluating UAV-based RGB imagery to discriminate healthy plants from those infected by stripe and wheat leaf rusts in winter wheat (Triticum aestivum L.), with a focus on implementing an expert system to assist growers in improved disease management. RGB images were acquired at four representative wheat-producing sites in the Grand Duchy of Luxembourg. Diseased leaf areas were determined based on the digital numbers (DNs) of green and red spectral bands for wheat stripe rust (WSR), and the combination of DNs of green, red, and blue spectral bands for wheat leaf rust (WLR). WSR and WLR caused alterations in the typical reflectance spectra of wheat plants between the green and red spectral channels. Overall, good agreements between UAV-based estimates and observations were found for canopy cover, WSR, and WLR severities, with statistically significant correlations (p-value (Kendall) < 0.0001). Correlation coefficients were 0.92, 0.96, and 0.86 for WSR severity, WLR severity, and canopy cover, respectively. While the estimation of canopy cover was most often less accurate (correlation coefficients < 0.20), WSR and WLR infected leaf areas were identified satisfactorily using the RGB imagery-derived indices during the critical period (i.e., stem elongation and booting stages) for efficacious fungicide application, while disease severities were also quantified accurately over the same period. Using such a UAV-based RGB imagery method for monitoring fungal foliar diseases throughout the cropping season can help to identify any new disease outbreak and efficaciously control its spread. View Full-Text
Keywords: fungal foliar disease; RGB imagery; precision agriculture; disease management fungal foliar disease; RGB imagery; precision agriculture; disease management
►▼ Show Figures 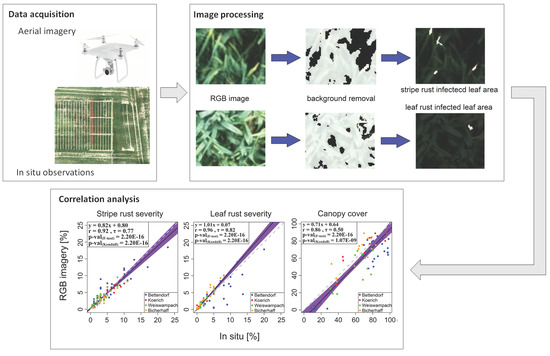