Soil moisture is a key variable used to describe water and energy exchanges at the land surface/atmosphere interface. Therefore, there is widespread interest in the use of soil moisture retrievals from passive microwave satellites. In the assimilation of satellite soil moisture data into land surface models, two approaches are commonly used. In the first approach brightness temperature (TB) data are assimilated, while in the second approach retrieved soil moisture (SM) data from the satellite are assimilated. However, there is not a significant body of literature comparing the differences between these two approaches, and it is not known whether there is any advantage in using a particular approach over the other. In this study, TB and SM L2 retrieval products from the Soil Moisture and Ocean Salinity (SMOS) satellite are assimilated into the Canadian Land Surface Scheme (CLASS), for improved soil moisture estimation over an agricultural region in Saskatchewan. CLASS is the land surface component of the Canadian Earth System Model (CESM), and the Canadian Seasonal and Interannual Prediction System (CanSIPS). Our results indicated that assimilating the SMOS products improved the soil moisture simulation skill of the CLASS. Near surface soil moisture assimilation also resulted in improved forecasts of root zone soil moisture (RZSM) values. Although both techniques resulted in improved forecasts of RZSM, assimilation of TB resulted in the superior estimates. View Full-Text
Keywords: soil measurements; hydrologic measurements; data assimilation; Kalman filtering; microwave radiometry; land-surface modeling soil measurements; hydrologic measurements; data assimilation; Kalman filtering; microwave radiometry; land-surface modeling
►▼ Show Figures 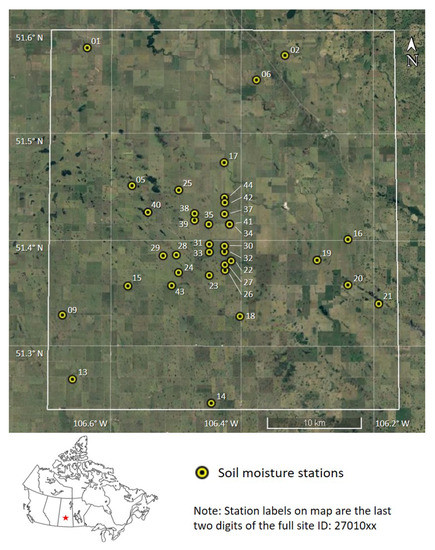