Effect of Organic Matter Content on the Spectral Signature of Iron Oxides across the VIS–NIR Spectral Region in Artificial Mixtures: An Example from a Red Soil from Israel
Next Article in Special Issue

Monitoring the Seasonal Hydrology of Alpine Wetlands in Response to Snow Cover Dynamics and Summer Climate: A Novel Approach with Sentinel-2

Climate change in the European Alps during recent years has led to decreased snow cover duration as well as increases in the frequency and intensity of summer heat waves. The risk of drought for alpine wetlands and temporary pools, which rely on water from snowmelt and provide habitat for specialist plant and amphibian biodiversity, is largely unknown and understudied in this context. Here, we test and validate a novel application of Sentinel-2 imagery aimed at quantifying seasonal variation in water surface area in the context of 95 small (median surface area <100 m2) and shallow (median depth of 20 cm) alpine wetlands in the French Alps, using a linear spectral unmixing approach. For three study years (2016–2018), we used path-analysis to correlate mid-summer water surface area to annual metrics of snowpack (depth and duration) and spring and summer climate (temperature and precipitation). We further sought to evaluate potential biotic responses to drought for study years by monitoring the survival of common frog (Rana temporaria) tadpoles and wetland plant biomass production quantified using peak Normalized Difference Vegetation Index (NDVI). We found strong agreement between citizen science-based observations of water surface area and Sentinel-2 based estimates (R2 = 0.8–0.9). Mid-summer watershed snow cover duration and summer temperatures emerged as the most important factors regulating alpine wetland hydrology, while the effects of summer precipitation, and local and watershed snow melt-out timing were not significant. We found that a lack of summer snowfields in 2017 combined with a summer heat wave resulted in a significant decrease in mid-summer water surface area, and led to the drying up of certain wetlands as well as the observed mortality of tadpoles. We did not observe a negative effect of the 2017 summer on the biomass production of wetland vegetation, suggesting that wetlands that maintain soil moisture may act as favorable microhabitats for above treeline vegetation during dry years. Our work introduces a remote sensing-based protocol for monitoring the surface hydrology of alpine wetland habitats at the regional scale. Given that climate models predict continued reduction of snow cover in the Alps during the coming years, as well as particularly intense warming during the summer months, our conclusions underscore the vulnerability of alpine wetlands in the face of ongoing climate change. View Full-Text
Keywords: French Alps; optical remote sensing; multitemporal; linear spectral unmixing; NDVI; drought; Rana temporaria; ecohydrology; mountain temporary pools French Alps; optical remote sensing; multitemporal; linear spectral unmixing; NDVI; drought; Rana temporaria; ecohydrology; mountain temporary pools
►▼ Show Figures 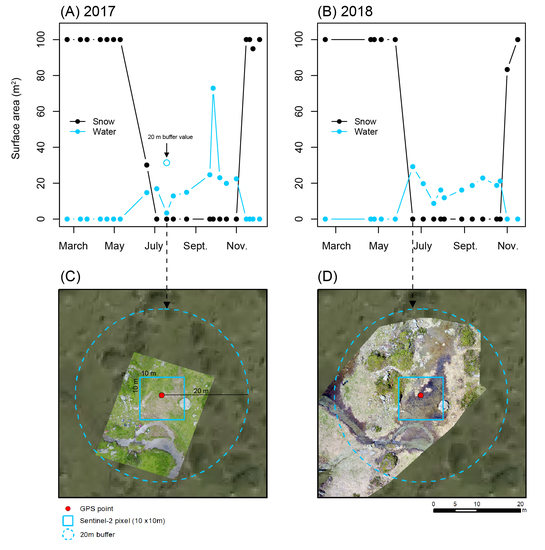