Assessment of the Characteristics of Recent Major Wildfires in the USA, Australia and Brazil in 2018–2019 Using Multi-Source Satellite Products
Next Article in Special Issue

The “Riese” project was a huge construction project initiated by German Nazi authorities, which was located in the northeast of the Sowie Mountains (Ger. Eulengebirge) in southwestern Poland. Construction of the “Riese” complex took place in 1943–1945 but was left unfinished. Due to the lack of reliable sources, the exact intended function of the Riese complex is still unknown. The construction was carried out by prisoners, mostly Jews, from the main nearby concentration camps, KL Gross-Rosen and KL Auschwitz-Birkenau. Thanks to the discovery in the National Archives (NARA, USA) of a valuable series of German aerial photographs taken in February 1945, insight into the location of labour camps was obtained. These photographs, combined with LiDAR data from the Head Office of Geodesy and Cartography (Warsaw, Poland), allowed for the effective identification and field inspection of the camps’ remains. The location and delimitation of the selected labour camps were confirmed by an analysis of the 1945 aerial photograph combined with LiDAR data. These results were supported by field inspection as well as archival testimonies of witnesses. The field inspection of the construction remains indicated intentionally faulty construction works, which deliberately reduced the durability of the buildings and made them easy to demolish. The authors believe that it is urgent to continue the research and share the results with both the scientific community and the local community. The authors also want to emphasize that this less-known aspect of Holocaust history is gradually disappearing in social and institutional memory and is losing to the commercial mythologization of the Riese object. View Full-Text
Keywords: concentration and labour camps; taboo heritage; archival aerial photography; LiDAR; GIS concentration and labour camps; taboo heritage; archival aerial photography; LiDAR; GIS
►▼ Show Figures 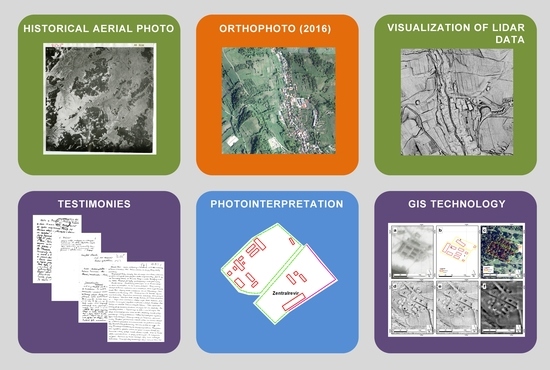