In Zaruma city, located in the El Oro province, Ecuador, gold mines have been exploited since before the colonial period. According to the chroniclers of that time, 2700 tons of gold were sent to Spain. This exploitation continued in the colonial, republican, and current periods. The legalized mining operation, with foreign companies such as South Development Company (SADCO) and national companies such as the Associated Industrial Mining Company (CIMA), exploited the mines legally until they dissolved and gave rise to small associations, artisanal mining, and, with them, illegal mining. Illegal underground mining is generated without order and technical direction, and cuts mineralized veins in andesitic rocks, volcanic breccia, tuffs and dacitic porphyry that have been intensely weatherized from surface to more than 80 meters depth. These rocks have become totally altered soils and saprolites, which have caused the destabilization of the mining galleries and the superficial collapse of the topographic relief. The illegal miners, called "Sableros", after a period of exploitation at one site, when the gold grade decreased, abandon these illegal mines to begin other mining work at other sites near mineralized veins or near legalized mining galleries in operation. Due to this anthropic activity of illegal exploitation through the mining galleries and “piques” that remain under the colonial center of the city, sinkings have occurred in various sectors detected and reported in various technical reports since 1995. The Ecuadorian Government has been unable to control these illegal mining activities. The indicators of initial subsidence of the terrain are small movements that accumulate over a time and that can be detected with InSAR technology in large areas, improving the traditional detection performed with geodetic instrumentation such as total stations and geodetic marks. Recent subsidence at Fe y Alegría-La Immaculada School, the city’s hospital and Gonzalo Pizarro Street, indicates that there is active subsidence in these and other sectors of the city. The dynamic triggers that have possibly accelerated the rate of subsidence and landslides on the slopes are earthquakes (5 to 6 Mw) and heavy rains in deforested areas. Although several sinks and active subsidence caused by underground mining were detected in these sectors and in other sectors in previous decades, which were detailed in various reports of geological hazards prepared by specialized institutions, underground mining has continued under the colonial city center. In view of the existing risk, this article presents a forecasting methodology for the constant monitoring of long-term soil subsidence, especially in the center of the colonial city, which is a national cultural heritage and candidate for the cultural heritage of humanity. This is a proposal for the use of synthetic aperture radar interferometry (InSAR) for the subsidence analysis of topographic relief in the colonial area of the city of Zaruma by illegal mining galleries. View Full-Text
Keywords: terrain deformation; mining galleries; subsidence; InSAR terrain deformation; mining galleries; subsidence; InSAR
►▼ Show Figures 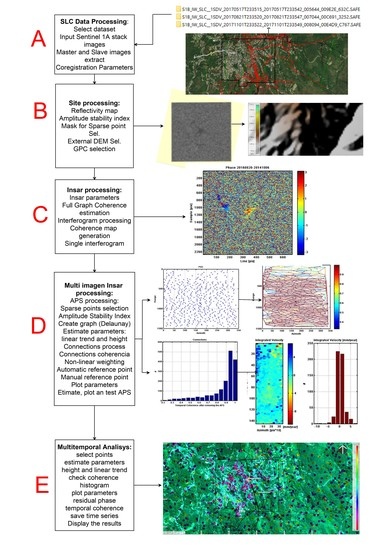