SPA-Based Methods for the Quantitative Estimation of the Soil Salt Content in Saline-Alkali Land from Field Spectroscopy Data: A Case Study from the Yellow River Irrigation Regions
Previous Article in Journal

Developing rapid and non-destructive methods for chlorophyll estimation over large spatial areas is a topic of much interest, as it would provide an indirect measure of plant photosynthetic response, be useful in monitoring soil nitrogen content, and offer the capacity to assess vegetation structural and functional dynamics. Traditional methods of direct tissue analysis or the use of handheld meters, are not able to capture chlorophyll variability at anything beyond point scales, so are not particularly useful for informing decisions on plant health and status at the field scale. Examining the spectral response of plants via remote sensing has shown much promise as a means to capture variations in vegetation properties, while offering a non-destructive and scalable approach to monitoring. However, determining the optimum combination of spectra or spectral indices to inform plant response remains an active area of investigation. Here, we explore the use of a machine learning approach to enhance the estimation of leaf chlorophyll (Chlt), defined as the sum of chlorophyll a and b, from spectral reflectance data. Using an ASD FieldSpec 4 Hi-Res spectroradiometer, 2700 individual leaf hyperspectral reflectance measurements were acquired from wheat plants grown across a gradient of soil salinity and nutrient levels in a greenhouse experiment. The extractable Chlt was determined from laboratory analysis of 270 collocated samples, each composed of three leaf discs. A random forest regression algorithm was trained against these data, with input predictors based upon (1) reflectance values from 2102 bands across the 400–2500 nm spectral range; and (2) 45 established vegetation indices. As a benchmark, a standard univariate regression analysis was performed to model the relationship between measured Chlt and the selected vegetation indices. Results show that the root mean square error (RMSE) was significantly reduced when using the machine learning approach compared to standard linear regression. When exploiting the entire spectral range of individual bands as input variables, the random forest estimated Chlt with an RMSE of 5.49 µg·cm−2 and an R2 of 0.89. Model accuracy was improved when using vegetation indices as input variables, producing an RMSE ranging from 3.62 to 3.91 µg·cm−2, depending on the particular combination of indices selected. In further analysis, input predictors were ranked according to their importance level, and a step-wise reduction in the number of input features (from 45 down to 7) was performed. Implementing this resulted in no significant effect on the RMSE, and showed that much the same prediction accuracy could be obtained by a smaller subset of indices. Importantly, the random forest regression approach identified many important variables that were not good predictors according to their linear regression statistics. Overall, the research illustrates the promise in using established vegetation indices as input variables in a machine learning approach for the enhanced estimation of Chlt from hyperspectral data. View Full-Text
Keywords: chlorophyll; wheat; photosynthetic pigment; linear regression; vegetation indices; hyperspectral; leaf; retrieval; prediction chlorophyll; wheat; photosynthetic pigment; linear regression; vegetation indices; hyperspectral; leaf; retrieval; prediction
►▼ Show Figures 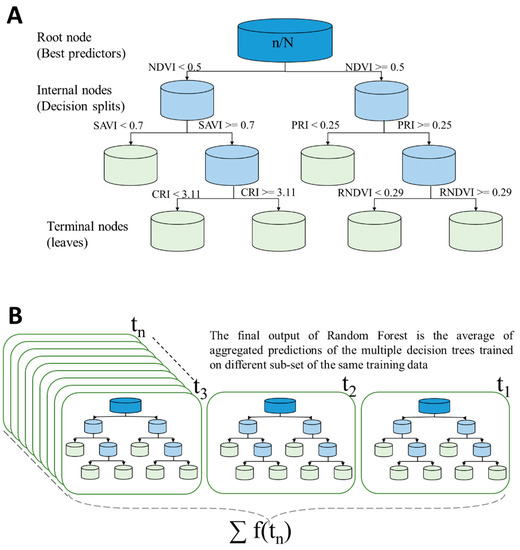