Landsat 4, 5 and 7 (1982 to 2017) Analysis Ready Data (ARD) Observation Coverage over the Conterminous United States and Implications for Terrestrial Monitoring

The Landsat Analysis Ready Data (ARD) are designed to make the U.S. Landsat archive straightforward to use. In this paper, the availability of the Landsat 4 and 5 Thematic Mapper (TM) and Landsat 7 Enhanced Thematic Mapper Plus (ETM+) ARD over the conterminous United States (CONUS) are quantified for a 36-year period (1 January 1982 to 31 December 2017). Complex patterns of ARD availability occur due to the satellite orbit and sensor geometry, cloud, sensor acquisition and health issues and because of changing relative orientation of the ARD tiles with respect to the Landsat orbit paths. Quantitative per-pixel and summary ARD tile results are reported. Within the CONUS, the average annual number of non-cloudy observations in each 150 × 150 km ARD tile varies from 0.53 to 16.80 (Landsat 4 TM), 11.08 to 22.83 (Landsat 5 TM), 9.73 to 21.72 (Landsat 7 ETM+) and 14.23 to 30.07 (all three sensors). The annual number was most frequently only 2 to 4 Landsat 4 TM observations (36% of the CONUS tiles), increasing to 14 to 16 Landsat 5 TM observations (26% of tiles), 12 to 14 Landsat 7 ETM+ observations (31% of tiles) and 18 to 20 observations (23% of tiles) when considering all three sensors. The most frequently observed ARD tiles were in the arid south-west and in certain mountain rain shadow regions and the least observed tiles were in the north-east, around the Great Lakes and along parts of the north-west coast. The quality of time series algorithm results is expected to be reduced at ARD tiles with low reported availability. The smallest annual number of cloud-free observations for the Landsat 5 TM are over ARD tile h28v04 (northern New York state), for Landsat 7 ETM+ are over tile h25v07 (Ohio and Pennsylvania) and for Landsat 4 TM are over tile h22v08 (northern Indiana). The greatest annual number of cloud-free observations for the Landsat 5 TM and 7 ETM+ ARD are over southern California ARD tile h04v11 and for the Landsat 4 TM are over southern Arizona tile h06v13. The reported results likely overestimate the number of good surface observations because shadows and cirrus clouds were not considered. Implications of the findings for terrestrial monitoring and future ARD research are discussed. View Full-Text
Keywords: Landsat; analysis ready data; observation coverage; big data Landsat; analysis ready data; observation coverage; big data
►▼ Show Figures 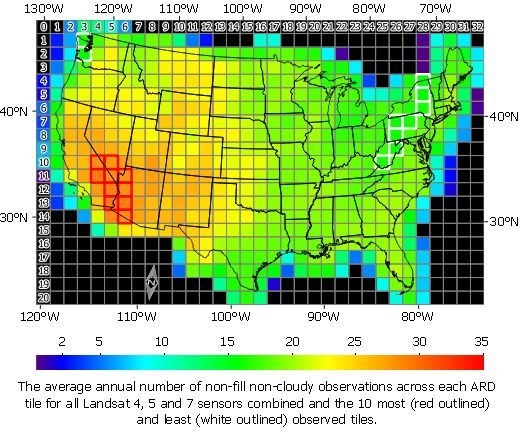