A New Method for Large-Scale Landslide Classification from Satellite Radar

PS-InSAR Analysis of Sentinel-1 Data for Detecting Ground Motion in Temperate Oceanic Climate Zones: A Case Study in the Republic of Ireland

Regions of temperate oceanic climate have historically represented a challenge for the application of satellite-based multi-temporal SAR interferometry. The landscapes of such regions are commonly characterized by extensive, seasonally-variable vegetation coverage that can cause low temporal coherence and limit the detection capabilities of SAR imagery as acquired, for instance, by previous ERS-1/2 and ENVISAT missions. In this work, we exploited the enhanced resolution in space and time of the recently deployed Sentinel-1A/B SAR satellites to detect and monitor ground motions occurring in two study areas in the Republic of Ireland. The first, is a ~1800 km2 area spanning the upland karst of the Clare Burren and the adjacent mantled lowland karst of east Galway. The second, is an area of 100 km2 in Co. Meath spanning an active mine site. The available datasets, consisting of more than 100 images acquired in both ascending and descending orbits from April 2015 to March 2018, were processed by using the Permanent Scatterer approach. The obtained results highlight the presence of small-scale ground motions in both urban and natural environments with displacement rates along the satellite line of sight up to −17 mm/year. Localized subsidence was detected in recently built areas, along the infrastructure (both roads and railways), and over the mine site, while zones of subsidence, uplift, or both, have been recorded in a number of peatland areas. Furthermore, several measured target points indicate the presence of unstable areas along the coastline. Many of the detected movements were previously unknown. These results demonstrate the feasibility of adopting multi-temporal interferometry based on Sentinel-1 data for the detection and monitoring of mm-scale ground movements even over small areas (<100 m2) in environments influenced by temperate oceanic climate. View Full-Text
Keywords: Permanent Scatterer; Sentinel-1; InSAR; Ireland; peatland; temperate oceanic climate Permanent Scatterer; Sentinel-1; InSAR; Ireland; peatland; temperate oceanic climate
►▼ Show Figures 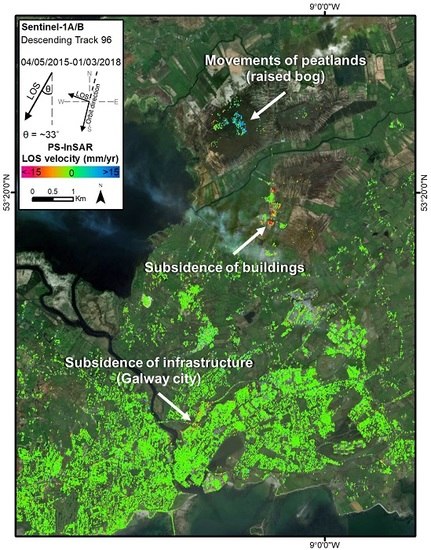