PS-InSAR Analysis of Sentinel-1 Data for Detecting Ground Motion in Temperate Oceanic Climate Zones: A Case Study in the Republic of Ireland
Previous Article in Journal

3D Viewpoint Management and Navigation in Urban Planning: Application to the Exploratory Phase

A New Method for Large-Scale Landslide Classification from Satellite Radar

Following a large continental earthquake, information on the spatial distribution of triggered landslides is required as quickly as possible for use in emergency response coordination. Synthetic Aperture Radar (SAR) methods have the potential to overcome variability in weather conditions, which often causes delays of days or weeks when mapping landslides using optical satellite imagery. Here we test landslide classifiers based on SAR coherence, which is estimated from the similarity in phase change in time between small ensembles of pixels. We test two existing SAR-coherence-based landslide classifiers against an independent inventory of landslides triggered following the Mw 7.8 Gorkha, Nepal earthquake, and present and test a new method, which uses a classifier based on coherence calculated from ensembles of neighbouring pixels and coherence calculated from a more dispersed ensemble of ‘sibling’ pixels. Using Receiver Operating Characteristic analysis, we show that none of these three SAR-coherence-based landslide classification methods are suitable for mapping individual landslides on a pixel-by-pixel basis. However, they show potential in generating lower-resolution density maps, which are used by emergency responders following an earthquake to coordinate large-scale operations and identify priority areas. The new method we present outperforms existing methods when tested at these lower resolutions, suggesting that it may be able to provide useful and rapid information on landslide distributions following major continental earthquakes. View Full-Text
Keywords: landslides; emergency response; synthetic aperture radar landslides; emergency response; synthetic aperture radar
►▼ Show Figures 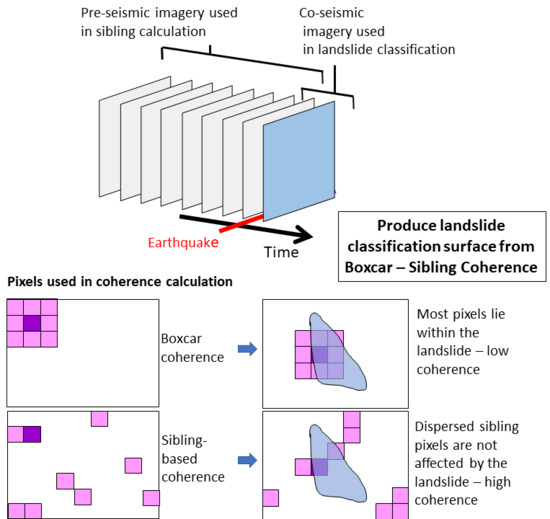