As in conventional error matrix-based accuracy assessments, collocated reference sample data are often used for characterizing per-pixel (local) accuracies in land-cover change maps so that local accuracy predictions can be made using direct methods. In that way, correctness in “from-to” change categorization at sample pixels is assessed and modeled directly. To circumvent the issue of reference sample data being non-collocated, as is often the case for sample data collected independently for mono-temporal reference land-cover labeling or those added necessarily to reflect landscape changes, the PXCOV (Product rule with adjustment for cross-COVariance between single-date classification correctness) method was developed previously. However, the use of PXCOV becomes complicated when few or no collocated sample data are available and cross-validation cokriging, a procedure involving non-trivial geostatistical modeling, has to be incurred for estimation of cross-correlation. To overcome PXCOV’s lack of practicality when using mostly non-collocated sample data, this paper presents a simple alternative. It is furnished through stratified approximation of cross-correlation and features combined use of minimum and multiplication operators. Specifically, in this composite method (named Fuzzy+Product), minimum operator (resembling fuzzy set “min” operator and thus named Fuzzy) is applied over no-change pixels stratum where maximum correlation is assumed, while multiplication operator (i.e., product rule named Product) is applied for change pixels stratum where cross-correlation is assumed negligible (i.e., minimum correlation), without having to run cross-validation cokriging as in PXCOV. Studies were undertaken to test the proposed method based on datasets collected previously concerning GlobeLand30 2000 and 2010 land-cover at five sites in China. For each site, five model-training samples (being mostly non-collocated) of equal sizes and one independent model-testing sample (collocated) were used. Logistic regression models fitted with relevant sample data were applied to predict local accuracies in single-date classifications using selected map class occurrence pattern indices quantified in optimized moving windows. The area under the curve (AUC) of the receiver operating characteristic was used for evaluating alternative methods. Empirical results confirmed that method Fuzzy+Product is more accurate than both Fuzzy and Product in general and there are no statistically significant differences between it and PXCOV. This indicates Fuzzy+Product being a method of relative simplicity but reasonable accuracy when reference data are non-collocated or mostly so. Its value is likely best manifested when local and global accuracy characterization in multi-temporal change information (discrete and fractional) is concerned. View Full-Text
Keywords: land-cover change; local accuracy; non-collocated; cross-correlation; correctness land-cover change; local accuracy; non-collocated; cross-correlation; correctness
►▼ Show Figures 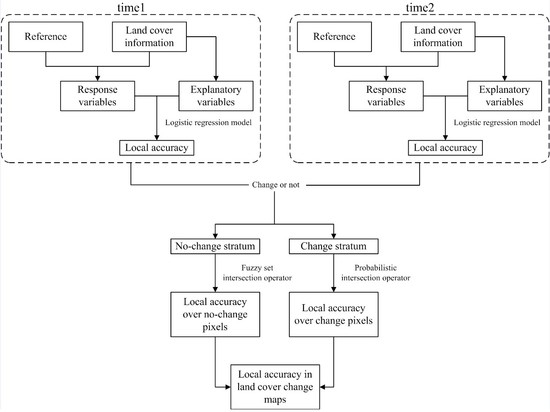