Sustainability of Positive Psychological Status in the Workplace: The Influence of Organizational Psychological Ownership and Psychological Capital on Police Officers’ Behavior
Previous Article in Journal

The article focuses on evaluating a transportation experiment that intends to improve road safety by analyzing transport shocks that significantly affect the system of securing the load, vehicle, driver, and other aspects. Within Europe, improper or insufficient securing of loads causes up to 25% of all cargo vehicle accidents. Our transport experiment consists of eight rides of a Tatra truck. The measured values of shocks (acceleration coefficients) are statistically evaluated. Three hypotheses are established for these purposes. First, it is proven that the probability distributions of the shocks values differ statistically significantly among individual rides, namely in their shape and median value. Thus further statistical analyses are performed separately for the individual rides, axes, and the accelerometer locations. These analyses prove significant exceedances of the normatively set limits given by the EN 12195-1:2010 standard, which is potentially risky. Especially for the z axis and y axis, the set 20% limit was exceeded in 75.0% and 56.3% of cases, respectively. In the case of the x axis, the established 20% limit was practically not exceeded at all. The analysis of exceeding the permitted limits (the statistical evaluation of the second and third established hypothesis) is based on boxplots that graphically describe the individual rides, as well as on the found contaminated log-normal distribution of the values of the acceleration coefficients in the individual rides. The last hypothesis regarding exceeding the double value of the permitted limit is rejected. Methods of statistical comparison are used during data analysis. The probability distribution of acceleration coefficients is modeled using a contaminated log-normal distribution. View Full-Text
Keywords: road safety; transport experiment; shock; truck accident; cargo securing; boxplot; outliers; contaminated distribution road safety; transport experiment; shock; truck accident; cargo securing; boxplot; outliers; contaminated distribution
►▼ Show Figures 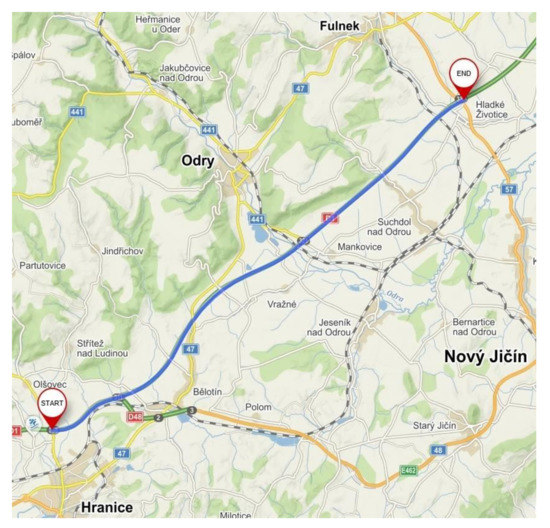