The main aim of this research was to determine the potential effects of different tillage systems (TT: traditional tillage and RT: reduced tillage) on runoff and erosion at two different locations (Kahramanmaras and Tarsus, Southern Turkey) under (i) fallow, (ii) wheat (Triticumaestivum L.), and (iii) sainfoin (Onobrychissativa L.) crops. Rainfall simulations with intensity of 120 mm h−1 and 30-min duration, representing a typical extreme thunderstorm in this area, were used. We quantified the elapsed time to runoff generation (ET), total runoff volume (R), soil loss (SL), sediment concentration (SC), and runoff coefficient (RC). At both locations, the fallow plots indicated the first runoff response ranging between 1.2 and 3.1 min, while the range was between 9.4 and 8.9 min for the sainfoin plots. The highest runoff coefficient was recorded for the fallow parcel in Tarsus (57.7%), and the lowest runoff coefficient was recorded for the sainfoin parcel in Kahramanmaras (4%). For both study sites, the fallow plots showed higher soil erosion rates (871 and 29.21 g m−2) compared with the wheat plots (307 and 11.25 g m−2), while sainfoin recorded the lowest soil losses (93.68 and 3.45 g m−2), for Tarsus and Kahramanmaras, respectively. Runoff and sediment yield generated from sainfoin and wheat parcels under the RT system were less than under the TT system at the Kahramanmaras location. At the Tarsus location, the effect of soil tillage on soil and water losses was insignificant on the sainfoin planted plots. The reduced tillage system was successful in reducing sediment yield and runoff generated from parcels growing wheat and sainfoin compared to traditional tillage in Tarsus location, but runoff and soil loss were found to be very high compared to parcels constructed in the Kahramanmaras location. View Full-Text
Keywords: rainfall simulation; extreme rainfall events; reduced tillage; runoff; soil erosion rainfall simulation; extreme rainfall events; reduced tillage; runoff; soil erosion
►▼ Show Figures 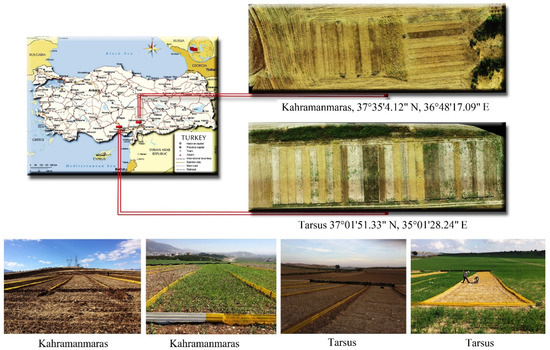