In fragile karst environments that have seen past and current human exploitation of agricultural and forest resources, the quantification of underground riverine sediment has been widely used to evaluate subterranean stream basin erosion. These measures are highly influenced by both precipitation and anthropogenic factors; therefore, soil erosion control measures must be urgently designed and applied. In this study, 17 years of sediment discharge across the Nandong underground river system in southwest China was monitored. To achieve this goal, the Mann–Kendal mutation test and proxy indicators were used to estimate the general influence of human activities and precipitation on sediment discharge. The results showed that: (1) Both anthropologic disturbance and rainfall have impacted the sediment discharge, although the influence of the anthropologic factor on sediment discharge was greater (61.53%), and (2) rainfall showed a hysteresis effect on sediment discharge. We obtained three different stages based on the mutation points and variation characteristics of the studied sediment discharge resulting from different driving forces, from 1998 to 2014. Prior to 2004, in the whole basin, the decrease of sediment yield was the result of the Natural Forest Protection Project. During the period from 2004 to 2008, due to continuous droughts, flood disasters, and intensive cultivation practices on the steeper hillslopes, the total sediment discharge of the whole basin increased. After 2009, the sediment discharge decreased due to the development of soil conservation projects and mushrooming reservoirs. These findings are expected to provide insights into watershed management and ecological restoration in fragile karst ecosystems, specifically, in southwestern Chinese river systems. More research must be conducted to monitor, with in situ measurements and observations, possible extreme events that can determine the exact erosion control measures that need to be designed and applied. View Full-Text
Keywords: anthropogenic disturbance; rainfall; sediment discharge; karst environments anthropogenic disturbance; rainfall; sediment discharge; karst environments
►▼ Show Figures 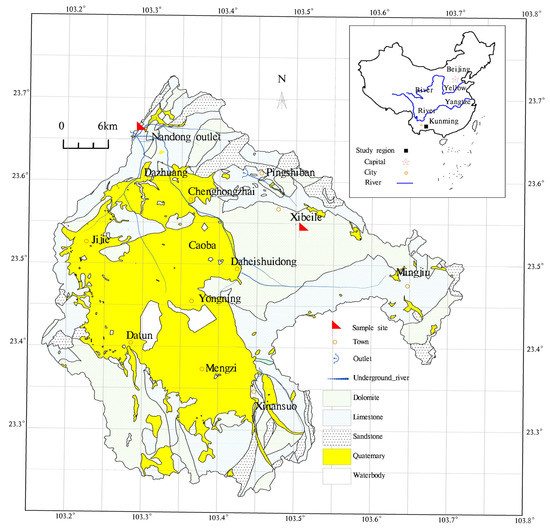