“We’re Made Criminals Just to Eat off the Land”: Colonial Wildlife Management and Repercussions on Inuit Well-Being
Previous Article in Journal

Chinese pangolin populations are declining globally due to illegal wildlife trades in its range countries, especially China and Vietnam, where the largest markets for this species exist. Identifying the trade routes is crucial for developing conservation plans for the pangolin and understanding the attributes of the individuals involved in the illegal trade. We aimed to identify local trade routes and the socio-economic status of people involved in pangolin trades from the Gaurishankar Conservation Area [a Protected Area (PA)] and the Ramechhap district [a non-Protected Area (non-PA)] of Nepal. We found that pangolin traders were typically poor, illiterate, unemployed, male, and of working age (17–40 years old). Confiscation rates of pangolin parts were higher in non-PAs than Pas as the illegal trade routes seemed to differ between the PAs and non-PAs. From 2014 to 2018, the prices of pangolin scales in PAs and non-PAs increased by 50% and 67%, respectively. Our results highlight locals facilitating the trade of pangolins, therefore we recommend the need for other income generating sources such as ecotourism or providing incentives to promote local industries as well as to establish Community Based Anti-Poaching Units among range countries and trade route countries to control the trade of this globally threatened species.
Keywords: Nepal; pangolin; poor communities; protected area; traders; unemployed; working age group Nepal; pangolin; poor communities; protected area; traders; unemployed; working age group

Illegal trades act as a major threat to the conservation of pangolins in Africa and Asia [1] and has resulted in local and international overexploitation of pangolins for meat and traditional medicine, particularly in China and Vietnam [2,3,4,5,6]. Most pangolins consumed in China and Vietnam are trafficked from neighboring Asian countries, even though the Convention on International Trade in Endangered Species of Wild Fauna and Flora (CITES) banned international commercial trade for the wild pangolin and its body parts [7,8]. Bans on international trade may not ensure the conservation of pangolins unless there are also changes in consumer behavior [9]. Emerging evidence also suggests that allopathic medicines are unlikely to become substitutes for wildlife-derived traditional medicines [10]. Domestication or wildlife farming could also potentially address public demand for these endangered species [11], though wildlife farming has been proposed as a form of demand reduction, despite the increasing evidence that indicates it is not successful in reducing demand, including for pangolins [11,12].
Chinese pangolins (Manis pentadactyla) inhabit the Asian countries of Bangladesh, Bhutan, China, India, Lao PDR, Myanmar, Thailand, Vietnam [6], and the mid-hills region of Eastern and Central Nepal [2,8,13,14]. The current population of Chinese pangolins in Nepal is unknown, but the species is considered threatened due to anthropogenic activities, such as poaching for wildlife trade, and habitat fragmentation [2,8,13,14]. It is illegal to hunt and kill pangolins in Nepal under Nepal’s National Parks and Wildlife Conservation Act 1973. Currently, the Chinese pangolin occupancy in Nepal is greater in protected areas than in non-protected areas due to the influence of human activities including agricultural practices, poaching, and development, primarily outside protected areas [15]. As a result of its overexploitation and illegal trade [1,5,6], the Chinese pangolin is categorized as Critically Endangered on the International Union for Conservation of Nature (IUCN)’s Red List of Threatened Species [6] and is listed in Appendix I of CITES [16]. In Nepal, the Chinese pangolin is classified as one of the most threatened species due to exploitation, agricultural practices, poaching, and development [2,14], and is protected by national law with all forms of trade banned.
The illegal wildlife trade is heavily influenced by the socioeconomic characteristics of local people [17]. Poor socioeconomic status, including poverty, unemployment, illiteracy, and lacking alternative livelihoods, drive people to participate in illegal wildlife trade [18]. Wildlife poaching activities are increasing at an alarming rate due to the growing demand in consumer markets and the high percentage of poverty in wildlife source areas [19]. Arguably, poorer communities would be less involved in wildlife poaching or trade if there was less of a demand from wealthier communities [20,21,22].
The primary detrimental factor in illegal wildlife trade is the high profit levels associated with the wildlife poaching [20], driven by wealthier communities [23]. Consequently, wildlife species become increasingly rare as the prices of wildlife parts, derivatives, and products increase exponentially [24]. In many developing countries, the income from illegal trade activities is often vital for sustaining the livelihoods of wildlife traders [23]. Reducing the incidences of wildlife poaching is impossible without elevating the household economies of these poachers [25]. Therefore, mitigating the effects of wildlife trade at the grassroots level should consider fulfilling the short-term goals of local communities [26]. Locals living in close proximity to wildlife thus have more incentives to manage this resource [27]. However, local people lack the luxury of supporting the conservation of wildlife species, as they are fully dependent on the wildlife’s resources for their survival [26]. Additionally, indigenous people often associate with or participate in hunting wildlife as a fundamental part of their tradition, culture, or religion [19], and restrictions placed upon their practices are problematic.
Most illegal Chinese pangolin trades from Nepal are known to be motivated by the demand from China. However, specific information on the trade routes from Nepal to other countries, and information regarding people involved in Chinese pangolin trade is largely unknown [28,29]. Effective pangolin conservation requires the identification of trade routes and information on people involved in ongoing trades for developing site-specific management plans and strengthening enforcement. In this study, we aimed to identify existing wildlife trade routes, as well as the socio-economic status of people involved in Chinese pangolin trades to inform conservation management strategies. We expected that the pangolin trade would occur along multiple trade routes to reduce detection by authorities and would be influenced by the socio-economic status of local people, which can vary based on land protection status.

We obtained lists of households within the GCA and the Ramechhap district from rural municipalities. We then determined the sampling size for the number of households selected using Slovin’s method (n = N/(1 + Ne2) with 95% confidence intervals, where n = sample size, N = total number of households available, and e = standard error of sample. Following Slovin’s method [34], we determined that a minimum of 388 households from the GCA (PA) and 399 from the Ramechhap district (non-PA) were necessary to obtain a suitable sample size for analyses. Therefore, we considered the minimum amount of samples required to be 400 households from each area in order to conduct a survey using semi-structured questionnaires between October 2018 and April 2019.
We used two sampling approaches to obtain survey information [35]: (1) random household sampling used to gather information about the demographic status of respondents, and (2) purposive snowball sampling from people living in the study area. Though this sampling approach does not represent the entire population, it does provide detailed information on the socio-economic status of traders involved in pangolin poaching, illegal trade routes used by traders, the price dynamics of pangolin scales from the last five years (2014–2018), and other information related to the poaching and trading of pangolins. We used snowball sampling to maximize information on the poaching and trading of pangolins. Further, we used two questionnaires for our sampling: one contained only questions on demographic status that were completed by all respondents, and a second containing questions regarding the poaching and trading of Chinese pangolins that was completed only by respondents familiar with these issues (Supplementary Table S1). We additionally asked these respondents about the reasons for hunting pangolins, including whether they knew about pangolin trade routes, the price of pangolins, whether pangolin trade was increasing or decreasing, who was involved in the pangolin trade, and whether the respondent was personally involved in the pangolin trade. We determined the price at which pangolin scales had been sold within the last five years from respondents during the purposive snowball sampling.
Purposive snowball sampling was done at the beginning of the survey, whereby the first respondents were selected through consultation meetings with members of local conservation institutions (i.e., the Gaurishankar Conservation Area Project of the GCA and the Divisional Forest Office of the Ramechhap district). The number of households selected for snowball sampling was 225 per area (the GCA and the Ramechhap district, respectively). Due to the sensitive nature of poaching, we signed a letter to ensure them that we would maintain their confidentiality and anonymity to facilitate accurate responses. The remaining households (n = 175 from each area) were selected using random sampling.
We gathered information from respondents over the age of 16 years, and recorded their educational (literate or illiterate (i.e., no formal education), employment (employed or unemployed), inhabitant (indigenous or immigrant) [36], and socio-economic statuses (sufficient income for daily livelihood or not), and sex (male or female).
We then collected information on pangolin seizure from the Gaurishankar Conservation Area Project and the Divisional Forest Office, as well as published news from 2014 to 2018. From seized records, we also obtained information on sex, age group, and ethnicity of individuals involved in the trade, along with the locations and quantities of scales seized. We also interviewed active poachers (N = 5; PA = 2, non-PA = 3) who were previously involved in illegal pangolin trades. All aspects of this study were approved by the Department of National Parks and Wildlife Conservation (Permission number: 564/075-076). We used Fisher’s exact test, or the Chi-squared test, and the Kruskal–Wallis test for binary and numeric responses, respectively, to examine the differences in demographics of those within the PA and those in the non-PA.

The respondents from the PA and the non-PA had similar demographics and socio-economic backgrounds (Table 1), except for the greater percentage (52.2%) of respondents from the PA who had sufficient income from agriculture alone to support their livelihoods compared to the non-PA respondents (39.9%) (χ2 = 6.5, p = 0.01). Although agriculture was the primary occupation in both areas, crop production was less common in the non-PA due to the occurrences of more extreme weather (S. Sharma, personal observation).

We found 32 (8 in PAs, 24 in non-PAs) arrests regarding the illegal trade of Chinese pangolins from 2011 to 2019. There were 12 times more scales seized from non-PAs (542 kg) than from PAs (45 kg). Men were predominantly involved in the pangolin trade (PA: 75%; non-PA: 94%), and all traders involved were of working age. One of the active traders started in the pangolin trade at the age of 17, and others became active when over 40 years old. People of many ethnic groups were reportedly involved in poaching of pangolin; most frequently, the poachers were of Tamang (non-PA) and Sherpa (PA) groups (Figure 2). Over 68.8% of pangolin seizure cases were reported from non-PAs (Kathmandu: 46%, Sindhupalchowk: 18.8%, Terai region bordering India: 7%, and Nuwakot, Bhaktapur and Sarlahi: 3.1%) and from PAs (Sindhupalchowk border with China: 21.9% and Dolakha: 3.1%).

We thank the Department of National Parks and Wildlife Conservation (Permission number: 564), Department of Forest, Divisional Forest Office of Ramechhap, the Gaurishankar Conservation Area, Rajendra Karki, and Chandeshwor Pattel for assisting us in our project. We thank Eric Wikramanayake, Kumar Sapkota, Ugan Manandar, Damber Bista for their support and guidance. We appreciate the time, effort, and the comments from three anonymous reviewers who worked to improve our manuscript. 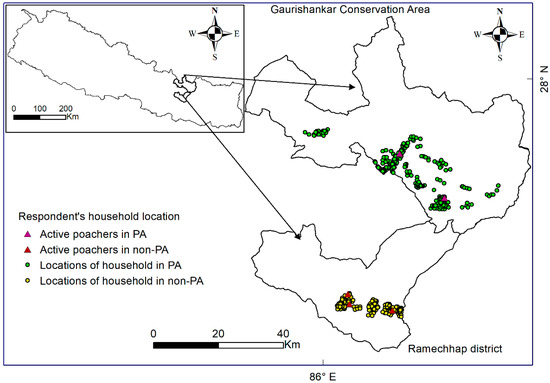 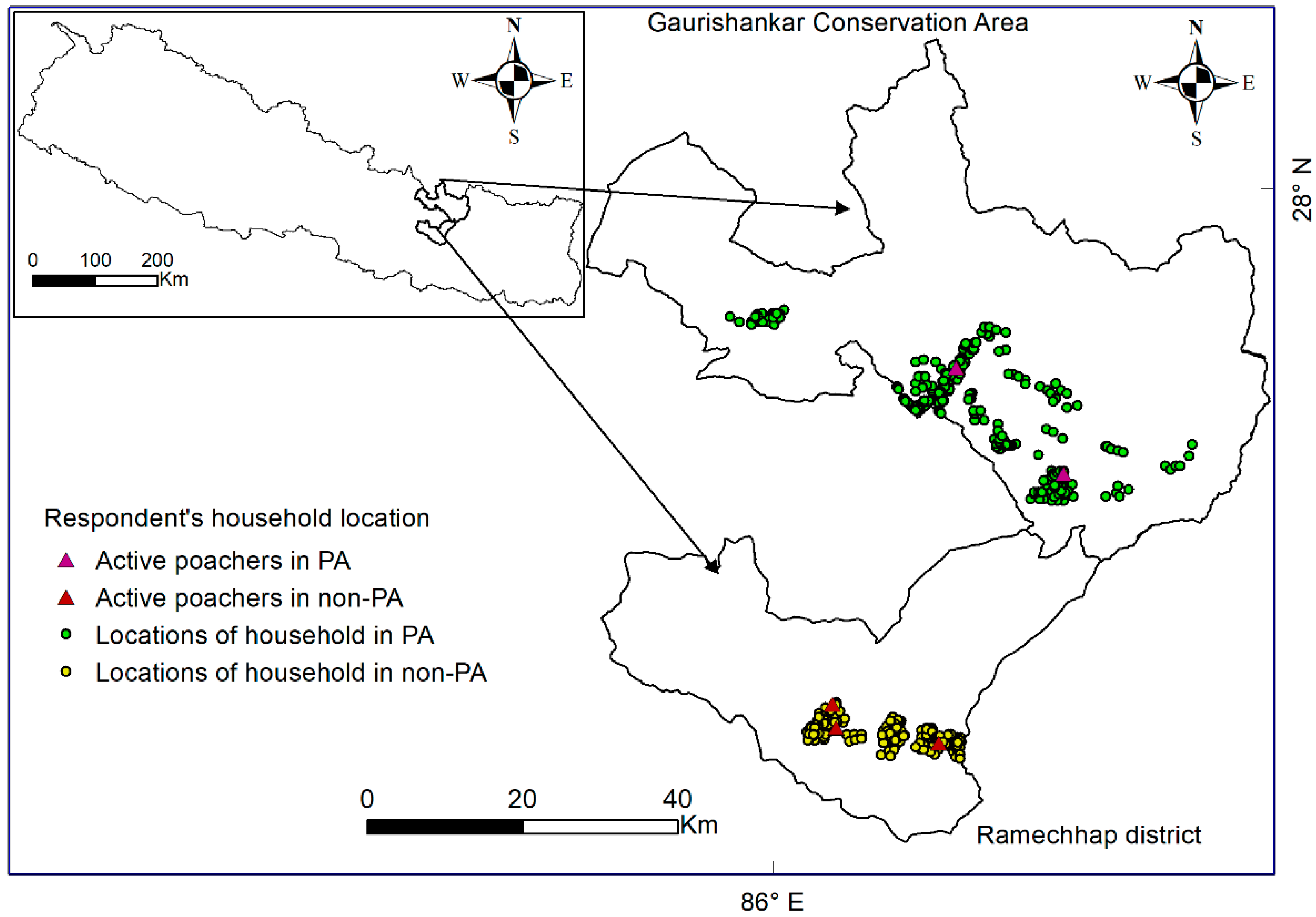 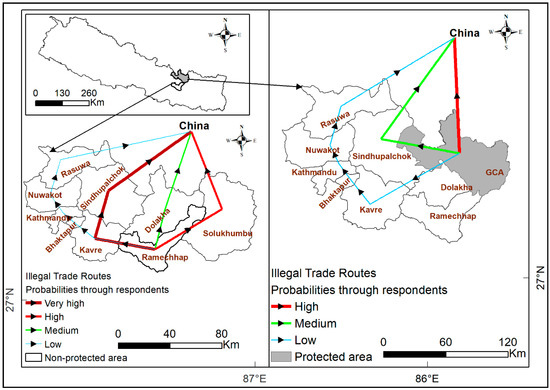 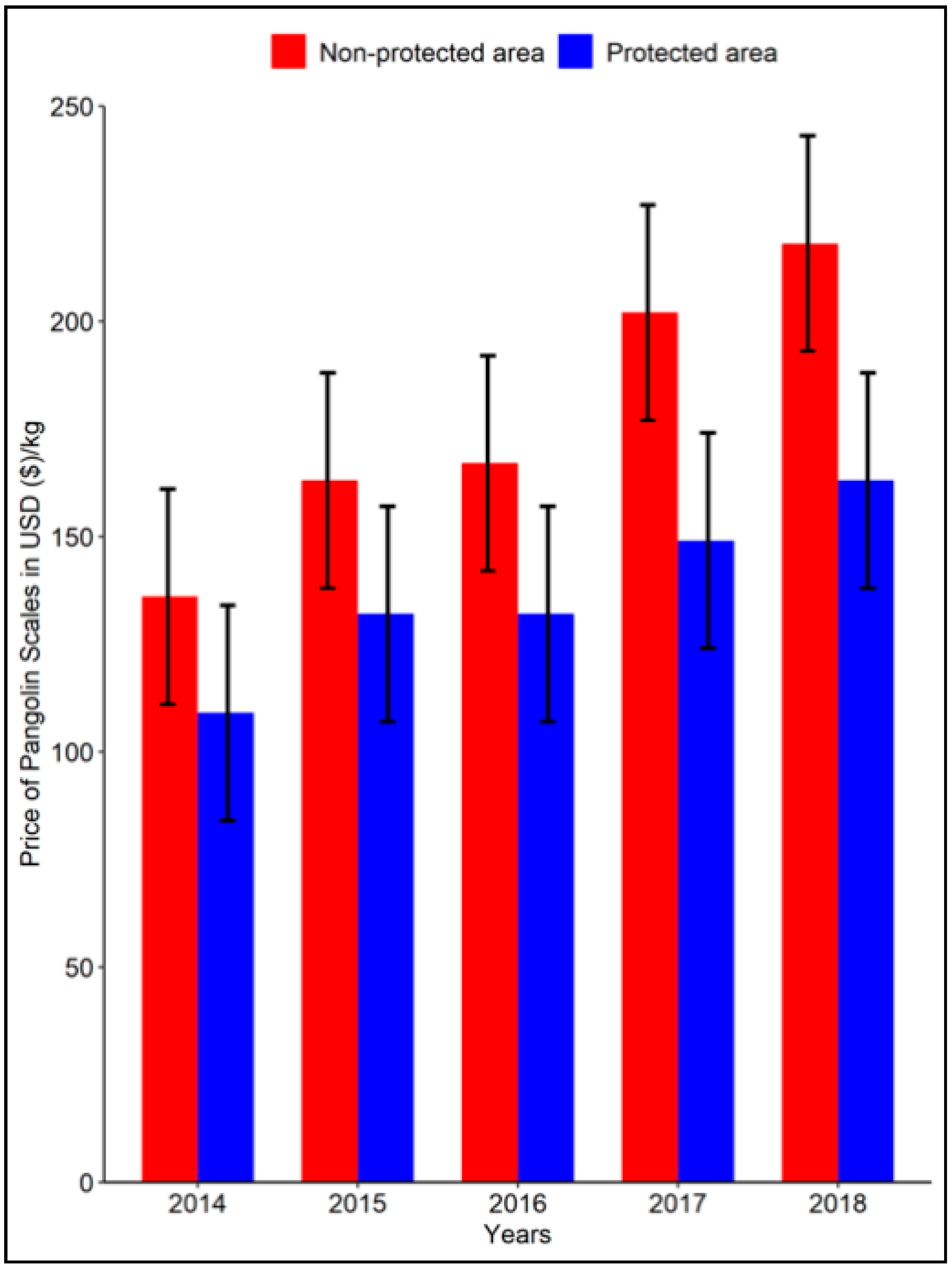