Sustainability and Business Outcomes in the Context of SMEs: Comparing Family Firms vs. Non-Family Firms
Previous Article in Journal

Can Social Capital and Psychological Capital Improve the Entrepreneurial Performance of the New Generation of Migrant Workers in China?

2.1. Social Capital and Entrepreneurial Performance of the New Generation of Migrant Workers

Bourdieu (1983) was a pioneer in the field of social capital [22]. He alleged that social capital is closely related to social networks. Several authors have conducted studies around the value of social capital and have offered similar interpretations to Pierre’s suggestions [23,24,25]. The entrepreneurial performance of the new generation of migrant workers is the final result of the new generation of migrant workers in various ways, such as large-scale breeding, starting companies or enterprises, and establishing cooperatives [26].
Scholars looked at the impact of social capital from different angles. Johannsson (1990) and Hu (2009) highlighted the value of social communication in identifying entrepreneurial opportunities [27,28]. Hills et al. (1997) and Yang (2012) indicate that social networks and relationships have an important effect on business start-ups [29,30]. The outcomes of these studies were confirmed by a more recent study conducted by Jiang (2014) [31]. Research conducted by Elfring and Hulsink (2003) indicates that people between 25 and 44 are more likely to start a business because of the access to capital and experience [32]. Farmers’ lack of access to capital, information, and education have limited their ability to identify entrepreneurial opportunities [26,33,34,35,36]. The social capital of potential entrepreneurs, such as their relatives and friends, the number of their relatives serving as village cadres or civil servants, the number of friends they keep close contact, and the long-term entrepreneurial environment in rural areas have a significant impact on the entrepreneurial performance of the new generation of migrant workers [37]. The quantity of strong links in terms of the entrepreneurial network of the new generation of migrant workers positively affects start-up performance. The same applies to the entrepreneur’s acquaintance level, the network strength, the contact frequency between the entrepreneur and the network members, and the extent of trust/support between the organization members, all of which have a significant positive influence on the organizational entrepreneurial performance [34].

2.2. Psychological Capital and Entrepreneurial Performance of the New Generation of Migrant Workers

Psychological capital is a relatively new concept, which is often defined as the core psychological aspects of an individual’s general enthusiasm [38]. Avolio (2005) argues that a positive psychological state includes hope, optimism, self-efficacy, and resilience [39]. Practically, it means a positive attitude toward future challenges, confidence, and perseverance. The study of Luthans et al. (2004 shows that psychological capital enhances an organization’s profitability and performance [40]. Other scholars have corroborated the value of psychological capital in predicting an organization’s performance and innovation capability [41,42]. Individuals with psychological traits such as overconfidence, need for achievement and autonomy, self-efficacy, and internal locus of control have more capacity to take risks and be successful in self-employment [43]. Kihlstrom and Laffont (1979) abandon the homogeneity assumption regarding the attitude toward risk and conclude that the probability of entry into self-employment is greater for individuals with lower levels of risk aversion [44]. The most studied personality traits include overconfidence [45], self-efficacy [46], internal locus of control [47], assertiveness [48,49], narcissism [50], and taste for variety [51]. All of these may also influence the entry into self-employment [52]. Research has also found a positive correlation between self-efficacy and entrepreneurial intentions of the new generation of migrant workers in China [53]. Within the new generation of migrant workers, those with positive psychological capital are more likely to make better and confident business decisions [54]. By reflecting on their actions continuously, they can improve the chances of developing a successful new business [55].

Social capital and psychological capital of the new generation of migrant workers. Informed by the research findings of Guo (2013) [83] and Luthans (2004, 2007) [38,40], the paper measured social capital and psychological capital of the new generation of migrant workers using a five point Likert scale [84]. The options given in the Likert scale ranged from 1 (never) to 5 (always). The following questions helped to measure social capital: “Do you have many close relatives?”, “Is your business supported by most of your friends?”, “Is it easy to get help for your business from your relatives and friends?”, “Are residents of your village/neighborhood close to each other?”, and “Are you close to you potential or existing business partners?”, etc. Similarly, the following questions are in place to measure psychological capital: “Are you brave and adventurous enough to achieve success?”, “Are you able to keep optimistic no matter what happens?”, “Do you have enough courage to explore the business world?”, and “Is your business making you more confident?”, etc.
Entrepreneurial performance of new generation of migrant workers. Research findings from Huang (2010) [34] and Zhu (2013) [62] informed the questionnaire to collect the relevant information to measure the entrepreneurial performance of the new generation of migrant workers. Questions asked in the survey include: “Is your business running smoothly?”, “Have you realized your goal set before you starting the business?”, “Have you summarized or put forward any new skill?”, “Is your new skill appreciated by others?”, “Did your business drive your family and friends into jobs and business?”, and “Do you think that you made contributions to the society through your business?”, etc.
Entrepreneurial opportunity identification. Zhang’s paper (2013) [69] informed the development of the 4 questions used to measure the level of entrepreneurial opportunity identification of new generation of migrant workers. The questions used in the survey were: “Can you find business opportunities earlier than others?”, “Can you get enough resources from others?”, “Are you clear with where your business is heading to?”, and “Are you ready to burden the failure of your business?”
Entrepreneurial environment perception. Research findings from several scholars [68,70,85] informed the questions to measure entrepreneurial environment perception. Some of these questions are: “Do local government officials show high efficiency in their work?”, “Are creating and innovation appreciated in local culture?”, “Is it easy to get loans?”, and “Are respect and attention paid to successful local business starters?”

In order to ensure the credibility of findings, a test on reliability and validity of the scale is presented in Table 2.
The reliability test shows that the Cronbach’s Alpha indexes of all potential variables are above 0.7, ranging from 0.776 to 0.955, which means the questionnaire shows high coherence. The validity test shows that the Kaiser Meyer Olkin (KMO) values of all variables are between 0.759 and 0.915. Their Bartlett values are all 0.000, indicating that the data are suitable for factor analysis. To evaluate the model fit, a test was conducted on a series of fit indexes, for example, absolute index, relative index and simple index.
The results shown in Table 3 suggest that the model is appropriate for this type of study.

The study has three limitations. First, the universality of self-compiled questionnaire was not well tested. Second, the research area was only limited to the Shaanxi province. This limited the representativeness and universality of the survey sample. Third, as Shaanxi is located in an underdeveloped region of the Western China, the majority of migrant entrepreneurs surveyed had started their own businesses in the form of a family-oriented entrepreneurship. The start-up cost is relatively low, without involving hiring people from the outside. However, the entrepreneurial performance is also generally low, and their annual revenue has been around 10,000 to 40,000 yuan, which is still far below that of family-based businesses in the developed regions of the Eastern China. Therefore, future research might focus on entrepreneurial performance in different regions of China. In particular, some interesting avenues of future research might be to investigate different types of self-employed entrepreneurship (hiring employees from outside or solo self-employed).

H.M. organized the models and data collection, F.T.B. and C.Z. worked on the analysis and policy recommendations.

The research area is only limited to Shaanxi province. A larger sample including migrant workers from other provinces may lead to more accurate results. 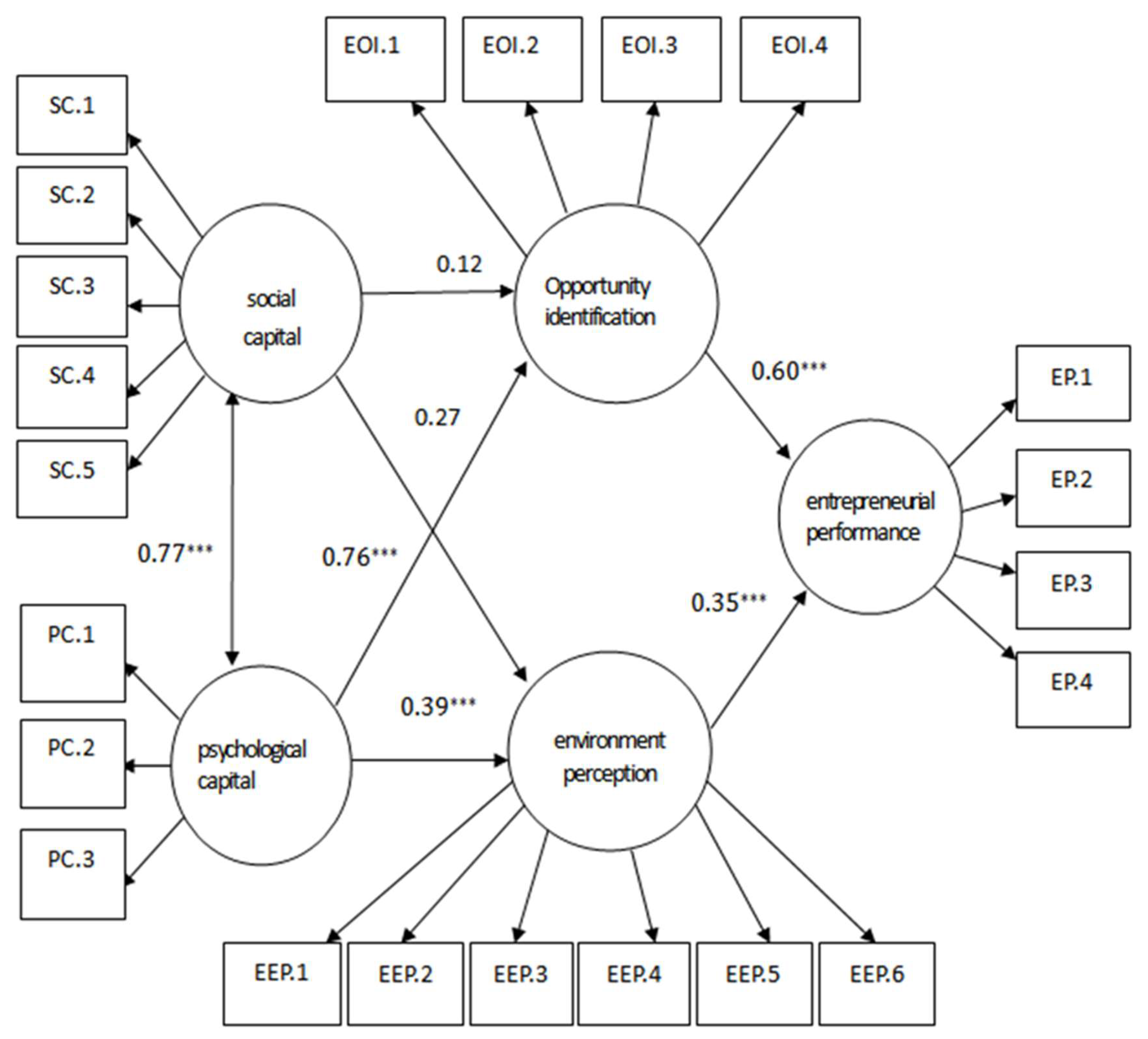 Table 5. Research Finding.
Table 5. Research Finding.
© 2018 by the authors. Licensee MDPI, Basel, Switzerland. This article is an open access article distributed under the terms and conditions of the Creative Commons Attribution (CC BY) license (http://creativecommons.org/licenses/by/4.0/).
We use cookies on our website to ensure you get the best experience. Read more about our cookies here.
Accept
We have just recently launched a new version of our website. Help us to further improve by taking part in this short 5 minute survey here. here.
Never show this again