Bipyridinium salts, commonly known as viologens, are π-acceptor molecules that strongly interact with π-donor compounds, such as porphyrins or amino acids, leading their self-assembling. These properties have promoted us to functionalize polysilicon microparticles with bipyridinium salts for the encapsulation and release of π-donor compounds such as catecholamines and indolamines. In this work, the synthesis and characterization of four gemini-type amphiphilic bipyridinium salts (1·4PF6–4·4PF6), and their immobilization either non-covalently or covalently on polysilicon surfaces and microparticles have been achieved. More importantly, they act as hosts for the subsequent incorporation of π-donor neurotransmitters such as dopamine, serotonin, adrenaline or noradrenaline. Ultraviolet-visible absorption and fluorescence spectroscopies and high-performance liquid chromatography were used to detect the formation of the complex in solution. The immobilization of bipyridinium salts and neurotransmitter incorporation on polysilicon surfaces was corroborated by contact angle measurements. The reduction in the bipyridinium moiety and the subsequent release of the neurotransmitter was achieved using ascorbic acid, or Vitamin C, as a triggering agent. Quantification of neurotransmitter encapsulated and released from the microparticles was performed using high-performance liquid chromatography. The cytotoxicity and genotoxicity studies of the bipyridinium salt 1·4PF6, which was selected for the non-covalent functionalization of the microparticles, demonstrated its low toxicity in the mouse fibroblast cell line (3T3/NIH), the human liver carcinoma cell line (HepG2) and the human epithelial colorectal adenocarcinoma cell line (Caco-2). View Full-Text
Keywords: π-donor/π-acceptor complexes; viologens; polysilicon microparticles; drug encapsulation; drug delivery; neurotransmitters π-donor/π-acceptor complexes; viologens; polysilicon microparticles; drug encapsulation; drug delivery; neurotransmitters
►▼ Show Figures 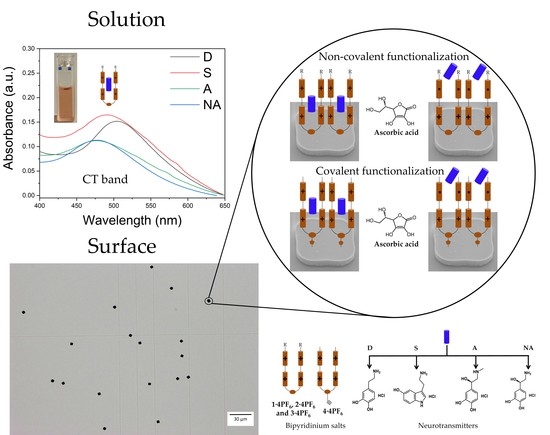