Pharmaceutical Benefits of Fluticasone Propionate Association to Delivery Systems: In Vitro and In Vivo Evaluation

The objective of the present work was to characterize the ability of liposomes and cyclodextrin (CyD) complexes to modulate the in vivo profile of fluticasone (FTZ). In vitro cell compatibility tests were performed, exposing A549 cells to FTZ in the free form and FTZ associated to liposomes and complexed with CyD. The in vivo fate of a selected FTZ liposomal formulation and of several FTZ CyD complexes was achieved following intranasal instillation or pulmonary administration in BALB/c mice, respectively. For pulmonary administration, an inhalation chamber was constructed to enable the simultaneously pulmonary administration to six mice. Thirty minutes and 3 h after administration, mice were sacrificed, their blood, lungs, livers, and spleens were removed, and FTZ level was determined by HPLC using an extraction procedure. The in vitro tests revealed no toxic effects of FTZ formulations, as cellular viability was always superior to 90% for FTZ concentrations ranging from 5 to 60 µM 72 h after incubation. The in vivo biodistribution results showed that FTZ incorporated in liposomes resulted in 20 and 30 times higher accumulation in the lungs in comparison with free FTZ, at 0.5 and 3 h after i.n. administration, respectively. FTZ associated to Hydroxypropyl-γ-cyclodextrin (HP-CyD) was the complex that permitted the higher accumulation of FTZ in the lungs in comparison with the respective free form. The results also suggest that the inhalation chamber apparatus can effectively facilitate the evaluation of in vivo inhalation. The establishment of an animal model of asthma allows us to further study the therapeutic efficacy of the developed FTZ formulations. View Full-Text
Keywords: fluticasone propionate; pulmonary delivery; intranasal delivery; liposomes; cyclodextrins; in vivo studies; asthma murine model fluticasone propionate; pulmonary delivery; intranasal delivery; liposomes; cyclodextrins; in vivo studies; asthma murine model
►▼ Show Figures 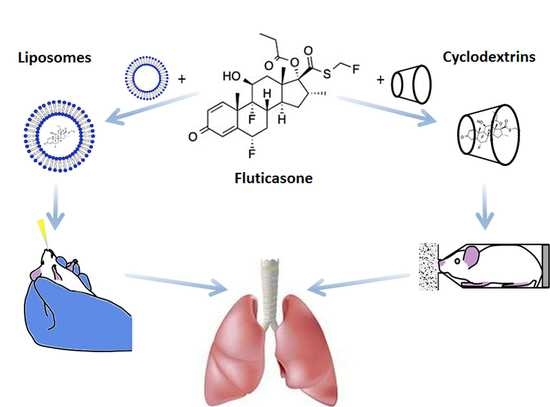