Islands as Hotspots for Emerging Mosquito-Borne Viruses: A One-Health Perspective

The One Health approach to studying disease acknowledges the interdependent relationship between humans, animals, and the environment that they share [1]. One Health perspectives further acknowledge, either implicitly or explicitly, that the ways in which landscapes are used and managed can affect the emergence and expansion of zoonotic and wildlife diseases [2,3,4,5]. While the link between changes to the physical landscape and outbreaks of infectious diseases is well-established [6,7,8,9], empirical evidence of the relationship between pathogen emergence and land use policy and management is lacking.
Hunting is a land use that has been managed in the United States since the early 20th Century. In the last several decades, hunting has been proposed as a means of wildlife disease control. This assertion assumed that hunting would truncate age structure and reduce population density, thus removing older, diseased individuals from the population and reducing density-dependent disease transmission [10,11,12,13,14,15,16]. Alternatively, it has been proposed that population-level responses to hunting, such as elevated birth rates or juvenile survival due to density-dependent host population growth, may instead increase the supply of disease-susceptible individuals and pathogen transmission [13,17,18,19]. In addition to inducing population-level responses to harvest, hunting in general [20] (and hunting with dogs in particular [21,22]) has been implicated in causing physiological changes associated with stress in hunted species. This relationship has important implications for the health of hunted wildlife populations, because chronic stress is associated with immunosuppression [23]. Despite the contested nature of the hunting-disease debate, empirical studies of the effect of harvests on disease dynamics are largely absent from the literature [24].
The potential for hunting to alter the disease dynamics of a system should be the greatest for non-native invasive species with large pathogen loads. Exotic invasive species are typically characterized by a high reproductive capacity that responds positively to medium and even high levels of harvest [25]. For example, wild pigs (Sus scrofa) are a ubiquitous exotic species in the U.S. that exhibit strong density-dependent demography and respond rapidly to harvest pressure by increasing fecundity [17,18,19,24]. Two non-native infectious pathogens of swine that are directly applicable to the study of harvest impacts on disease rates and transmission are pseudorabies (PrV, or Aujeszky’s disease), caused by the virus Suid herpesvirus 1, and brucellosis, caused by the bacteria Brucella spp. Direct swine–swine transmission of each pathogen typically leads to lifelong infection accompanied by neutralizing antibodies [26,27,28]. Though mortality is rarely associated with PrV and Brucella spp. in adult wild pigs [26,27,29], both pathogens can be lethal to fetal and juvenile pigs, wildlife, domestic animals, and, in the case of brucellosis, humans [30,31,32,33].
Florida is estimated to have >1 million free-ranging wild pigs, and they have been documented in all 67 counties [34]. Nonetheless, population size has not been estimated locally, nor have the number of harvested animals been enumerated. As a species with high ecological plasticity, they are found in a wide variety of habitat types and feed on a wide variety of plants and animals [35]. Both natural and human-assisted movement of pigs have contributed to their historical and recent expansion in Florida [36]. The management of wild pigs is complicated by their non-native status: On private lands, they are considered livestock and may be removed at any time and in any manner. On public lands that allow recreational hunting, they are the second-most popular game species (second only to white-tailed deer), and hunting methods vary from site to site. In areas that allow hunting, harvest quotas vary from none to some. In addition, on both private and public lands, wild pigs are frequently harvested for the purpose of animal control, are transported live to an abattoir for slaughter, or are transported live to privately owned game preserves for release and subsequent hunting [34]. Thus, in Florida, there are a wide variety of management actions taken [37], yet very little understanding of population and disease dynamics resulting from those actions. Considering the ubiquity of wild pigs in Florida and the economic and health threats posed by PrV and Brucella spp. to people, wildlife, and domestic animals, understanding the impacts of management actions on the emergence of these pathogens is important to informing future management decisions regarding wild pig populations.
In this study, we aspired to assess the effects of a singular harvest method (i.e., hunting with dogs) on the processes of disease dynamics and transmission. To this end, we compared seroprevalence and exposure risk for two pathogens among wild pig populations that were hunted with dogs versus populations that were harvested by other means. We chose to compare hunting with dogs to other harvest methods for two reasons: (1) Hunting with dogs is a popular method of harvest throughout the southeastern United States, and (2) hunting with dogs has been documented to increase the stress levels of both the targeted animal and the animals that are pursued but not killed [21,22]. Using almost 2000 serological samples collected from wild pigs at over 80 public and private sites across the geographic range of the state, we tested the hypothesis that the seroprevalence and risk of transmission of PrV and Brucella spp. would be increased by this form of harvest. Herein, we show that the prevalence of PrV exposure and PrV-Brucella spp. co-exposure, as well as individual risk of exposure to PrV, were greater in sites hunted with dogs than sites utilizing other harvest methods, but these differences were not found for Brucella spp. alone. Our results illustrate the necessity of including a One Health approach to understand the epidemiology of a disease and to incorporate effective wildlife management decisions to mitigate disease.

3.2. Effect of Dog Hunting on the Prevalence of Disease

3.3. Effect of Hunting on the Odds of Pathogen Exposure

This study was funded in part by the USDA National Institute of Food and Agriculture, McIntire-Stennis Project No. 1015620 to S.M. Wisely and a cooperative agreement with USDA APHIS WS National Wildlife Research Center, Agreement No. 12-7412-0896-CA.

The authors wish to thank the USDA Animal and Plant Health Inspection Service Wildlife Services biologists, check-station operators, hunters, and Florida Fish and Wildlife Conservation Commission staff for collecting wild pig samples on our behalf. We thank J. C. Griffin, R. Boughton, and M. Legare for assisting us with our sampling efforts in the field, and M. Lopez, M. Anderson, P. Royston, B. Pace-Aldana, D. Watkins, and B. Camposano for getting us the necessary sampling permits. 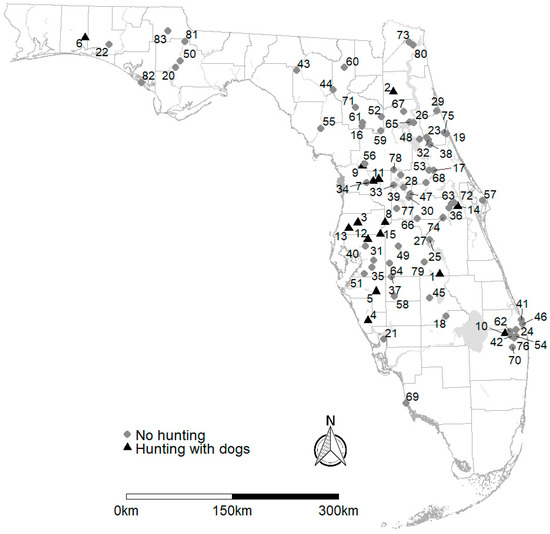