Description, Distribution, and Relevance of Viruses of the Forest Pathogen Gremmeniella abietina

The use of mycoviruses to manipulate the virulence of entomopathogenic fungi employed as biocontrol agents may lead to the development of novel methods to control attacks by insect pests. Such approaches are urgently required, as existing agrochemicals are being withdrawn from the market due to environmental and health concerns. The aim of this work is to investigate the presence and diversity of mycoviruses in large panels of entomopathogenic fungi, mostly from Spain and Denmark. In total, 151 isolates belonging to the genera Beauveria, Metarhizium, Lecanicillium, Purpureocillium, Isaria, and Paecilomyces were screened for the presence of dsRNA elements and 12 Spanish B. bassiana isolates were found to harbor mycoviruses. All identified mycoviruses belong to three previously characterised species, the officially recognised Beauveria bassiana victorivirus 1 (BbVV-1) and the proposed Beauveria bassiana partitivirus 2 (BbPV-2) and Beauveria bassiana polymycovirus 1 (BbPmV-1); individual B. bassiana isolates may harbor up to three of these mycoviruses. Notably, these mycovirus species are under distinct selection pressures, while recombination of viral genomes increases population diversity. Phylogenetic analysis of the RNA-dependent RNA polymerase gene sequences revealed that the current population structure in Spain is potentially a result of both vertical and horizontal mycovirus transmission. Finally, pathogenicity experiments using the Mediterranean fruit fly Ceratitis capitata showed no direct correlation between the presence of any particular mycovirus and the virulence of the B. bassiana isolates, but illustrated potentially interesting isolates that exhibit relatively high virulence, which will be used in more detailed virulence experimentation in the future. View Full-Text
Keywords: mycovirus; Beauveria bassiana; partitivirus; victorivirus; polymycovirus; selection pressure; recombination; transmission mycovirus; Beauveria bassiana; partitivirus; victorivirus; polymycovirus; selection pressure; recombination; transmission
►▼ Show Figures 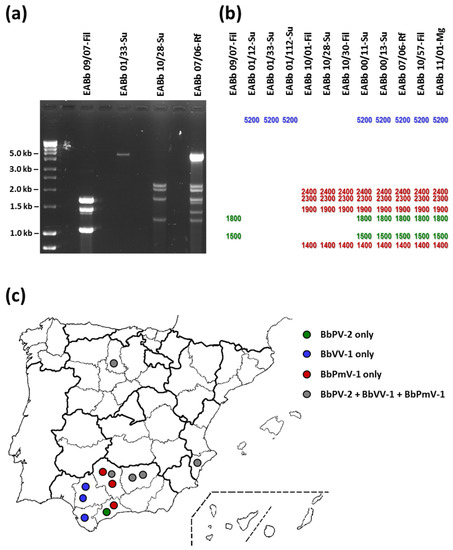