Impact of Rotor Material Wear on the Aluminum Refining Process

The paper presents the results of tests carried out during the refining of the AlSi9Cu3(Fe) alloy in industrial conditions at the FDU stand. In the tests, three different rotors made of classical graphite, fine-grained graphite and classical graphite with SiC spraying were tested for the degree of wear. A series of tests was conducted for five cases—0% to 100% of consumption every 25%—corresponding to the cycles of the refining process. The number of cycles corresponding to 100% wear of each rotor was determined as 1112. The results of the rotor wear profile for all types of graphite after the assumed cycles are presented. Comparison of CAD models of new rotors and 3D scans of rotors in the final stage of operation revealed material losses during operational tests. The study assessed the efficiency of the rotor in terms of its service life as well as work efficiency. It was estimated on the basis of the calculated values of the Dichte Index (DI) and the density of the samples solidified in the vacuum. The structure of samples before and after refining at various stages of rotor wear is also presented, and the results are discussed.
Keywords: aluminum refining; graphite wear; wear testing; rotary impeller aluminum refining; graphite wear; wear testing; rotary impeller

Currently, one of the stages of aluminum production is refining, which allows the removal of metallic and non-metallic impurities from the liquid metal, including hydrogen, which causes porosity and thus deteriorates the mechanical properties of the material [1,2,3]. In recent years, there has been a continuous development of techniques for introducing refining gas in the production process of high-grade aluminum. Starting with a single lance, a pile of lances with additional equipment, porous plugs, usually ended with rotors with graphite blades [4,5,6]. Therefore, nowadays, the refining process is very often carried out in reactors with rotors through which refining gas is introduced, most often argon or a mixture of argon and chlorine. The essence of the process is the introduction of fine gas bubbles into the liquid metal, which simultaneously mix the metal and remove unnecessary gaseous and non-metallic impurities as a result of flotation [7,8,9].
In recent years, the topic of aluminum refining has attracted many researchers. Most of the works focus on understanding the phenomena occurring during the process, which is possible thanks to the use of physical modeling [10,11,12,13,14,15]. More and more often, this modeling is supplemented and at the same time verified by numerical modeling [16,17,18,19,20]. However, many studies are still based on experiments conducted directly under industrial conditions [21,22,23,24,25]. An important topic is the durability of the rotor material. Various types of graphite are used as the material for the impeller and rotor shafts due to the ease of machining and non-wettability with metals. It is not without reason that graphite is used for elements of machines and rotors, because it is resistant to the refining gases used, i.e., chlorine, nitrogen and argon, as well as their mixtures and other aggregates. After immersion in a liquid metal bath, an element made of graphite is subjected to a rapid (fractional) temperature change from room temperature to several hundred degrees Celsius. At the same time, the rotor is exposed to cold refinery gases. Moreover, the very use of a rotor requires a high degree of strength, since the rotating gas distribution rotor heads are immersed in the melt during rotation. Therefore, one of the disadvantages of graphite as a material for rotors is its oxidation and erosion. Therefore, the paper presents test results for the same type of rotor with an impeller made of three different types of graphite. This type of research is unique, but many researchers are increasingly focusing on topics related to the durability and consumption of materials used in industry, although this type of research is not easy [26,27,28].

2. Research Study and the Object

The refining process was carried out on the AlSi9Cu3(Fe) alloy using an FDU unit with a rotor. The AlSi9Cu3(Fe) alloy was obtained from secondary materials (scrap); therefore, after each series of experiments, the chemical composition was determined with using optical emission spectrometry—the average chemical composition within the standards is presented in Table 1.
The research focused on the assessment of the refining efficiency at the FDU stand, as shown in Figure 1a, with different degrees of wear of various types of graphite rotor, the scheme of which is shown in Figure 1b with the characteristic dimensions marked. Table 2 presents the processing parameters; additionally, three types of tested rotors, which differed in the material from which the rotor was made, are marked in it.
In the first case, it was classic graphite, in the second, it was fine-grained graphite, and in the third, it was classic graphite with SiC spraying. Table 3 presents the basic parameters of these rotors, such as density, flexural strength and porosity. Rotors A1 and A2 are additionally impregnated with refractory material. This impregnation is to prevent the oxidation of the graphite, which should extend the service life of the FDU rotor. In the case of the A3 rotor, SiC refractory spraying was used instead of impregnation. The spray was applied to the entire surface of the shaft and impeller. Spraying is to prevent abrasive wear and oxidation of the graphite, which can extend the life of the FDU impeller.
The course of refining and the life of the rotors were assessed on the basis of the number of cycles at which a certain percentage of rotor wear is achieved. The achievement of individual stages or a specific degree of rotor wear was determined after consultation with the suppliers of individual rotors together with one of the local die-casting foundry company (for automotive), based on experience and internal regulations. Therefore, as part of the experiments, a series of tests was carried out for five cases (0% to 100% of consumption every 25%) corresponding to the cycles of the refining process. One cycle is 3 min of rotor operation. The wear values assigned to the respective cycles are summarized in Table 4. The number of cycles corresponding to 100% wear of each rotor was determined by the manufacturer as 1,200. The number of cycles corresponding to the individual stages of rotor wear was derived from this value. However, due to the production possibilities, it was not feasible to adhere exactly to the specified number of cycles. Due to the loss of A1 rotor material and the operational safety, the tests were completed before 1200 cycles. Therefore, 100% wear of the A1 rotor corresponds to 1112 cycles.
All samples of experiments series 1/VT to 5/VT (0% to 100% wear) were selected to give an idea of the course and nature of refining efficiency. Selected series of experiments represent 144 melts, where we focused on the efficiency of melt refining during production within the following technological flow: AlSi9Cu3(Fe) alloy → STRIKO shaft furnace → FDU → UP maintenance furnace → die casting → ROCKER COVER.
In order to assess the efficiency of refining, alloy samples for the density index test were taken before (FDUs) and after refining (FDUe)—it gives possibility to evaluate visual stages of degassing—Dichte Index test (80 mbar).
Gasification is usually referred to as double weighing. The principle of the method is to compare the density of an alloy sample solidifying under atmospheric pressure with a sample solidifying under reduced pressure. The Sieverts law is applied here, according to which the solubility of hydrogen in the metal is lower under reduced pressure, and thus, more hydrogen bubbles are removed during solidification than at atmospheric pressure. The bubbles remain enclosed in the metal and thus reduce its density. A sample of the alloy to be assessed is taken from the melting furnace and poured into two test crucibles (metal, ceramic or sand mix—according to the manufacturer) with a volume of about 40–80 mL. One sample is allowed to solidify at atmospheric pressure, while the other is allowed to solidify under a defined vacuum in a vacuum chamber. The density of the sample solidified under atmospheric pressure ρs atm and the sample solidified in vacuum ρs vak is determined by weighing in air and after immersion in a beaker with water, using the principle of Archimedes’ law. The sample densities are calculated according to the general formula:
From the densities ρs atm and ρs vak, the density index known as Dichte Index (DI) is determined according to the formula:
The double weighing method is probably the most common and relatively accurate method in foundries today. The value of the DI in conventional castings is usually around a few percent. Modern instruments designed for this method only require weighing of the sample in air and immersed in water. The density is calculated automatically. The DI expresses the overall effect of the content of gases and oxide inclusions—that is, the actual tendency of an alloy to form bubbles.

Based on the research, the following conclusions were drawn:

−
There is a certain amount of moisture in the new rotor, which contributes to re-gasification; as the rotor wear increases, the degree of degassing of the metal bath increases, and thus, the porosity of the obtained cast samples decreases;
−
For the A1 impeller made of classic graphite impregnated with refractory material, the longest service life was observed: about 1100 refining cycles;
−
The A2 impeller, made of fine-grained graphite, also impregnated with refractory material, has a slightly shorter service life than the A1 impeller; the impeller survived about 900 refining cycles;
−
The worst impeller in terms of service life turned out to be the A3 impeller (SiC sprayed graphite); its wear is observed after less than 350 refining cycles, which means that there is no recommendation for further use.

This research was created under the support of the Technology Agency of the Czech Republic within the frame of the program EPSILON in the solution of the projects reg. No. TH04010449 “Research and development of refining technologies for increasing of quality of aluminum alloys for high-performance quality castings”. The work was also supported by Grant 11/020/RGJ22/0089 (Silesian University of Technology). The work was also supported by Grant 11/020/BK_22/0088 (BK-208/RM2/2022)—Silesian University of Technology. 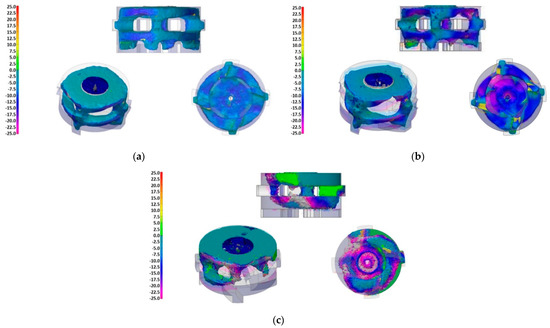 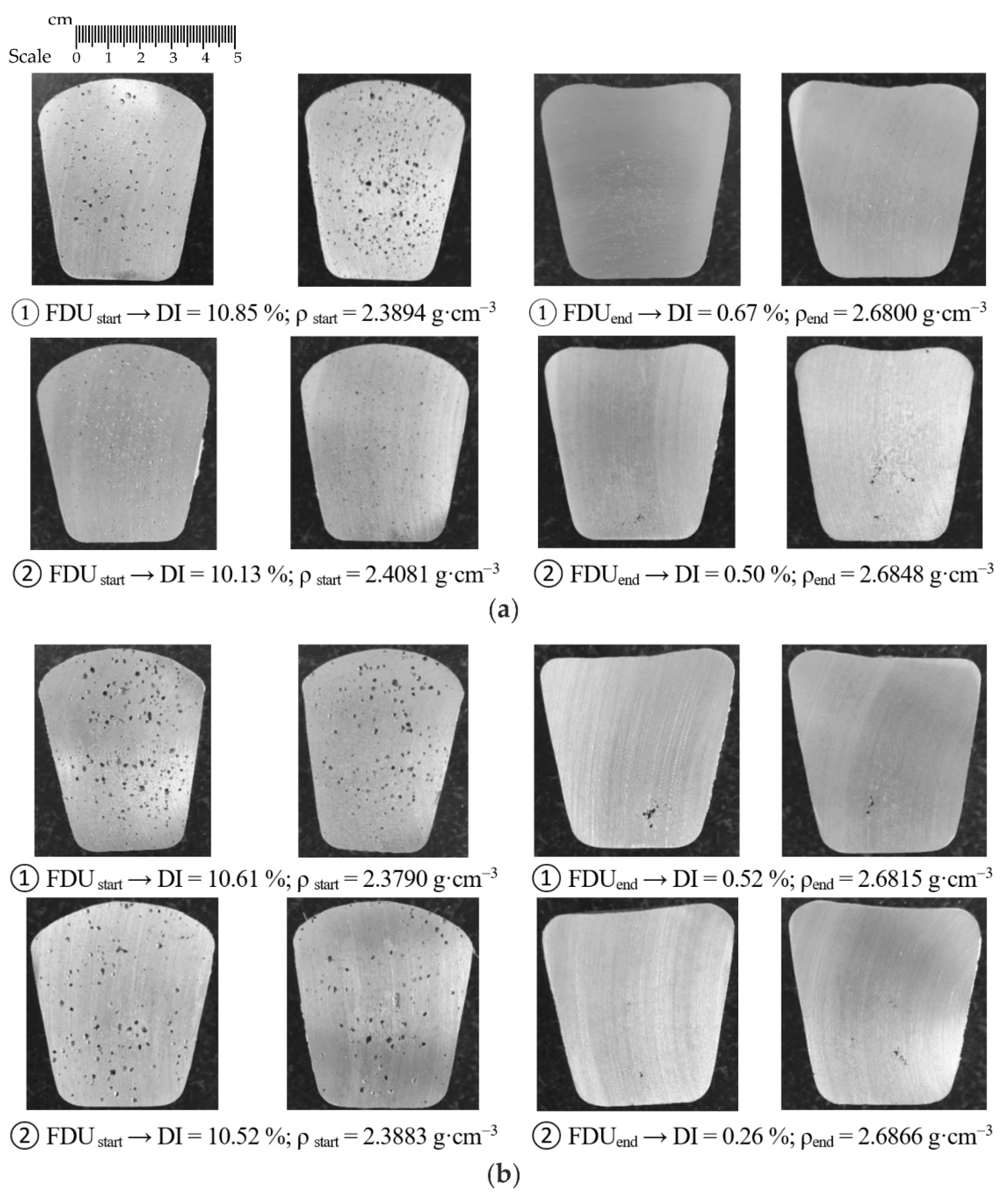 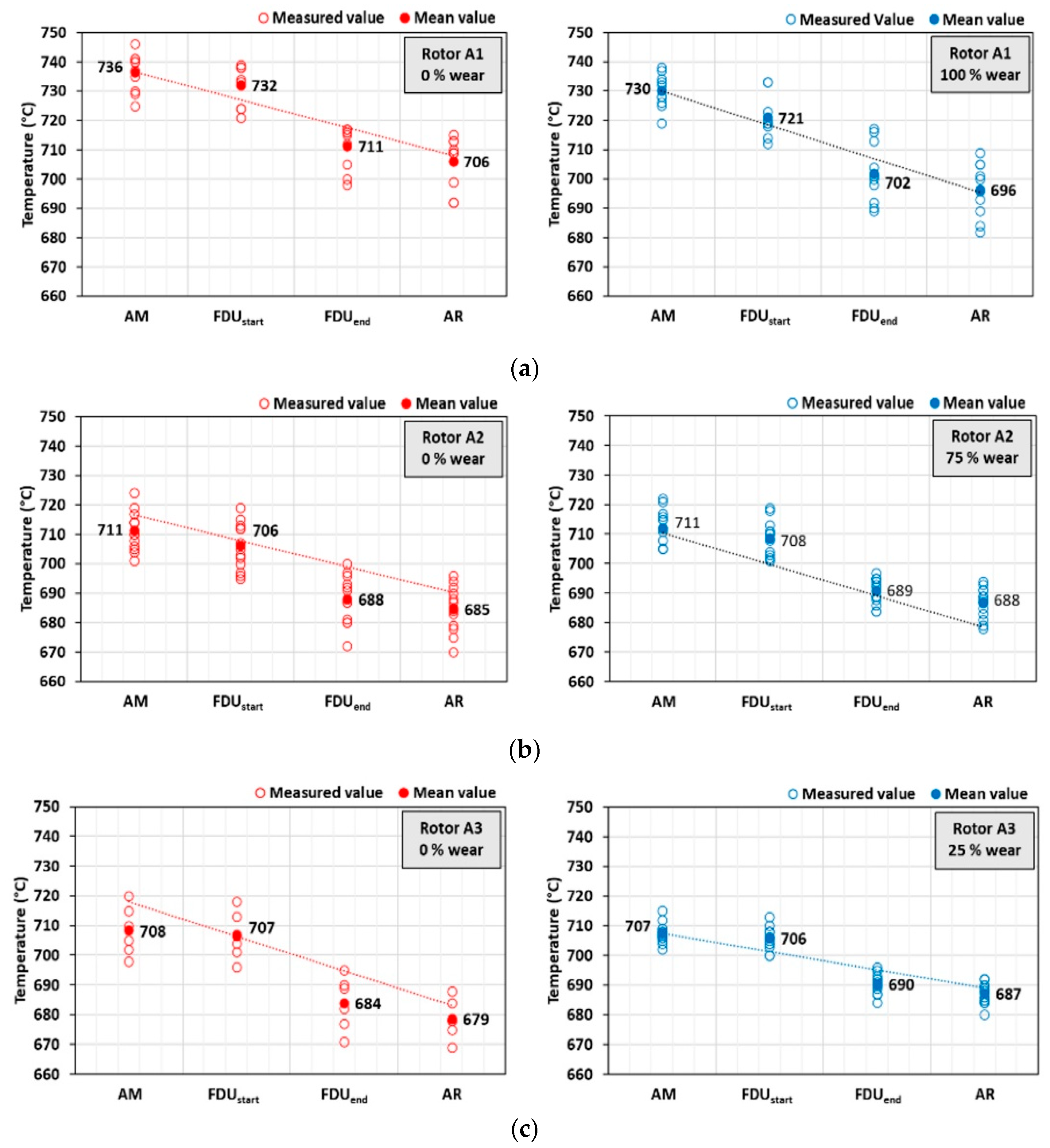