:
This study introduces a newly developed cladding device, through printing AISI 1045 carbon steel as single and double layers onto American Society for Testing and Materials (ASTM) H13 tool steel plate. In this study, the mechanical and tribological characteristics of single and double layers were experimentally investigated. Both layers were polished first and then subjected to ultrasonic nanocrystal surface modification (UNSM) treatment to improve the mechanical and tribological characteristics. Surface roughness, surface hardness and depth profile measurements, and X-ray diffraction (XRD) analysis of the polished and UNSM-treated layers were carried out. After tribological tests, the wear tracks of both layers were characterized by scanning electron microscopy (SEM) along with energy-dispersive X-ray spectroscopy (EDX). The surface roughness (Ra and Rz) of the single and double UNSM-treated layers was reduced 74.6% and 85.9% compared to those of both the as-received layers, respectively. In addition, the surface hardness of the single and double layers was dramatically increased, by approximately 23.6% and 23.4% after UNSM treatment, respectively. There was no significant reduction in friction coefficient of both the UNSM-treated layers, but the wear resistance of the single and double UNSM-treated layers was enhanced by approximately 9.4% and 19.3% compared to the single and double polished layers, respectively. It can be concluded that UNSM treatment was capable of improving the mechanical and tribological characteristics of both layers. The newly developed cladding device can be used as an alternative additive manufacturing (AM) method, but efforts and upgrades need to progress in order to increase the productivity of the device and also improve the quality of the layers.
Keywords:
AISI 1045 carbon steel; roughness; hardness; tribology; additive manufacturing; ultrasonic nanocrystal surface modification

The first tool welding system was invented by The Welding Institute (TWI) in the UK in 1991, namely as friction stir welding (FSW) and additive friction stir (AFS) [1]. In principle, these two systems work by producing a relatively solid tool through rotation in order to influence the unstable surface, and then increasing the temperature, leading to the welding of the materials [2]. In recent decades, some studies have concluded that FSW greatly improves mechanical, tensile, and weldability properties, demonstrating significant successful results in various metallic materials [3,4,5,6,7]. The disadvantages of FSW and AFS systems include their very large installations, costliness and impossible working. Importantly, it is well known that materials manufactured by additive manufacturing (AM) have several drawbacks, such as porosity, micro-cracks, residual stress, high surface roughness, etc. Hence, in this study, a newly developed cladding device and post-cladding surface modification treatment were introduced in order to overcome those disadvantages of FSW and AFS systems. The cladding device is a system that was recently developed on the basis of a new working principle and design. The key point of the device is to build a material layer-by-layer by means of rotating filler at high temperature. The cladding device operates by increasing the temperature of the filler to its melting point by means of the rotating movement of three rollers in relative motion. The difference between the newly developed cladding device and the conventional FSW and AFS systems is that it utilizes a filler as a solid tool.
Nowadays, the severe surface plastic deformation (S2PD) method plays a vital role in materials science to improve overall properties, especially the yield strength, of metallic materials. For instance, an ultrasonic nanocrystal surface modification (UNSM) treatment is capable of introducing plastic deformation leading to a grain size refinement and inducing a high residual compressive stress at the surface and subsurface layers, while increasing the mechanical properties of metallic materials. In UNSM treatment, there are several treatment parameters such as amplitude, frequency, linear speed, feed rate, static load, and a tip made of hard materials such as silicon nitride (Si3N4) or tungsten carbide (WC) [8,9]. These parameters need to be optimized to maximize its impact. It has been reported previously that UNSM treatment can improve the surface integrity and mechanical and tribological properties of metallic materials as well as AM metallic materials [10,11,12,13]. Zhao et al. applied UNSM as a pre-treatment to increase the wear and corrosion resistances of steel. It was found that UNSM treatment exhibited a significant improvement compared to polished steel [14]. Cao et al. investigated the influence of UNSM treatment on the fatigue characteristics of AISI 1045 carbon steel, where the presence of surface nanocrystal layers formed after UNSM treatment at the surface layers can retard the initiation of micro-cracks, leading to a delay in fracture [15]. Aerospace applications were one of the first sectors interested in AM carbon steel.
In general, AM methods such as selective laser melting (SLM), powder bed fusion (PBF), direct energy deposition (DED), and selective laser sintering (SLS) are beneficial in terms of more cost-effective production and lower material loss in comparison with traditional bulk materials. However, a newly developed cladding device has several advantages, such as compactness, light weight, affordability, and capability of working flexibly when compared with the aforementioned AM methods. Ma et al. investigated the influence and effectiveness of UNSM treatment on the surface finish of biomedical nitinol alloys manufactured by SLM [16]. It was found that the UNSM treatment significantly enhanced corrosion and wear resistances of biomedical alloys. Moreover, Zhang et al. found that fatigue behavior and mechanical properties of 3D printed titanium alloys manufactured by direct metal laser sintering (DMLS) were improved [17]. Thus, the objective of this study is to demonstrate the possibility of using the newly developed cladding device to build a material layer by layer by means of rotation reaching the melting point of a filler made of AISI 1045 carbon steel, and also to evaluate its mechanical and tribological characteristics. Subsequently, UNSM treatment was applied to AISI 1045 carbon steel layers on ASTM H13 tool steel manufactured by the cladding device to further improve the surface integrity and mechanical and tribological characteristics. The obtained results of this study will contribute to cost, production and material loss of the development of AM systems.

Schematic view of a newly developed cladding device can be seen in Figure 1. In this device, two rectilinear rollers with a diameter of 40 mm support the filler, and one of them has rotation transmitted from the motor, while the third roller, with a diameter of 40 mm, is fixed at specified angle of 15°, which provides a thrust load of 100 N. Thrust load was calculated using a load sensor (DBBP-200, BONGSHIN, Seoul, Korea). The working conditions of the cladding device are listed in Table 3. Moreover, the third roller provides a normal force that controls the filler speed (see Figure 1a). Filler made of AISI 1045 carbon steel was cut from plate by metal lathe and the final dimensions of the filler were: 200 mm in length and 10 mm in diameter. However, it is impossible to use a filler with a diameter of 10 mm due to the large contact area, so the filler diameter was optimized. Figure 2 shows actual pictures of the fillers with different diameters ranging from 2.5 mm to 5.5 mm. As shown in Figure 2a, a filler with a diameter of 5.5 mm failed without welding in plate, while the filler with a diameter of 4.5 mm in Figure 2b demonstrated good suitability for the welding/printing process and was chosen as the optimal filler diameter. Moreover, Figure 2c,d show fillers with diameters of 3.5 mm and 2.5 mm, respectively, which also failed due to their relatively small contact areas. Figure 3 shows SEM images of the top surface of single and double layers. It is clear from Figure 3a that the surface of the single layer is relatively smooth and homogenous, while the surface of the double layer is rough and heterogeneous (see Figure 3b) due to the rough surface of the layer beneath. The surface of the single as-received layer has a better relative surface quality, while the surface of the as-received double layer had a poor-quality surface with uneven curvature. In addition, the cross-sectional SEM images of the single and double layers are shown in Figure 4a,b and Figure 4c,d, respectively. It can be seen that both the single and double layers were deposited well onto the plate, and a delaminated part is magnified in Figure 4b,d. The gap between the single layer and the plate was in the range of 0.8 μm and 7.4 μm, while for the double layer, the gap between the double layer and the plate varied between 0.7 μm and 1.6 μm. Additionally, the thicknesses of the single and double layers were approximately 890 μm and 1800 μm, respectively.

UNSM treatment a new mechanical surface modification cold-forging process. The main principle of UNSM treatment is to introduce a severe plastic deformation that leads to grain size refinement and high compressive residual stress at the surface and subsurface layers, while increasing the mechanical properties of the metallic materials. The UNSM treatment parameters are provided in Table 4. Both the single and double layers were first polished and then subsequently treated by UNSM treatment. Details of UNSM treatment can be found in our previous studies [23,24].

Tribological characteristics of both layers were evaluated using a tribometer (CSM Instruments, Peseux, Switzerland) against Society of Automotive Engineers (SAE) 52100 bearing steel with a diameter of 7.14 mm under dry conditions. Several essential test conditions are provided in Table 5. The tribological experiments were replicated three times for each specimen due to data scattering.

Figure 5 shows SEM images of the polished and UNSM-treated surfaces of the single and double layers. It can be seen from Figure 5a,c that the polished layer demonstrated polishing-induced grooves, while those grooves were eliminated after UNSM treatment, as shown in Figure 5b,d. Also, it can be seen from Figure 5b,d that UNSM treatment produced lines along with bulges due to the movement of scanning forward and backward. Moreover, it is obvious that surface defects such as porosities and cracks—shown by yellow arrows in Figure 5a,c—are present on the surface of both the single and double layers, while the UNSM-treated surfaces of both the single and double layers have less regular defects, meaning that UNSM treatment is capable of removing AM-induced surface defects.

This research was supported by the Industrial Technology Innovation Development Project of the Ministry of Commerce, Industry and Energy, Rep. Korea (No. 10067485).

The authors acknowledge technical support given by Jun-Hyong Kim and Jun-Ho Lee of DesignMecha Co., Ltd. 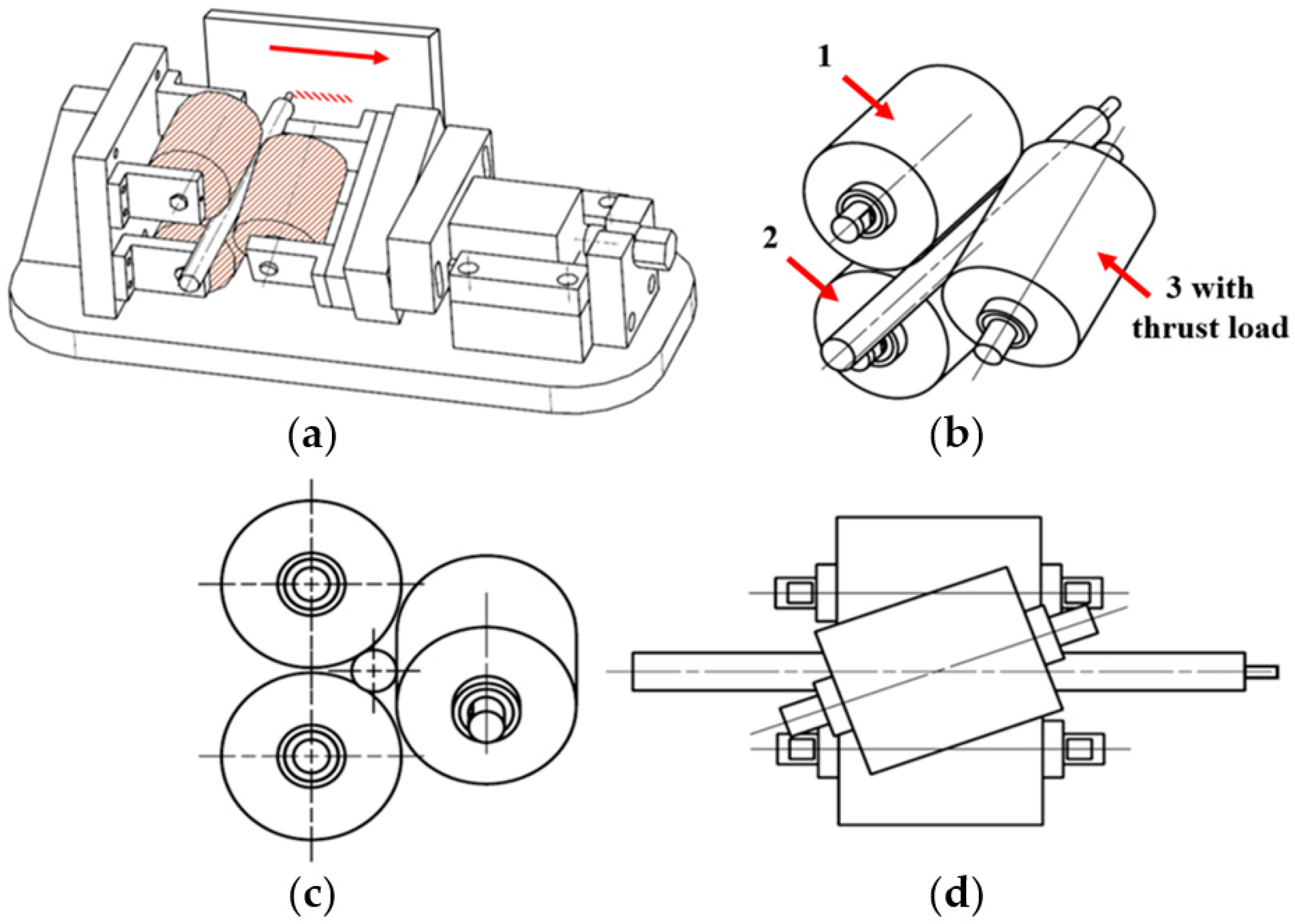 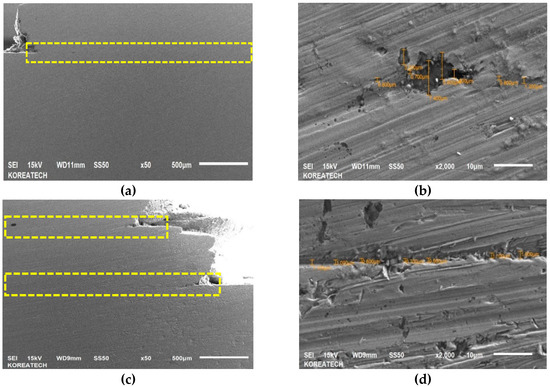 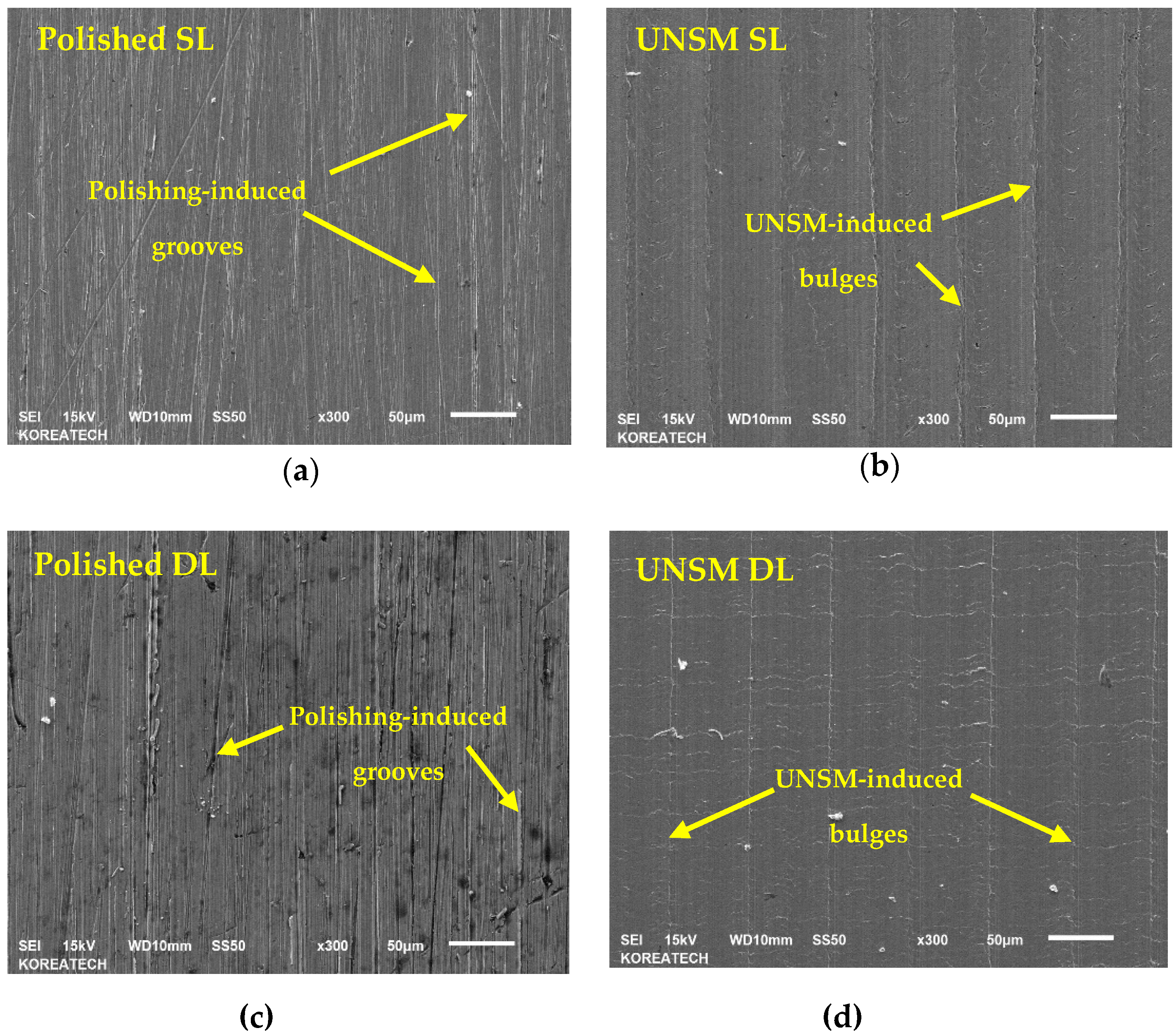 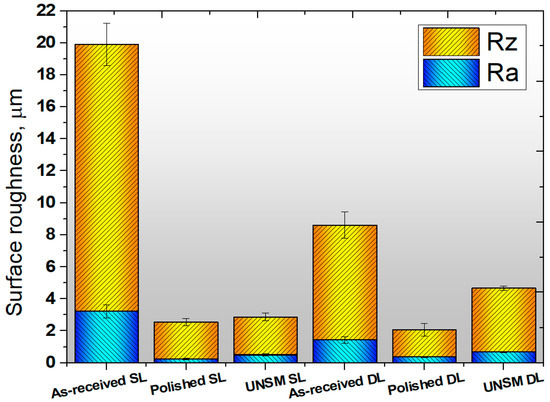 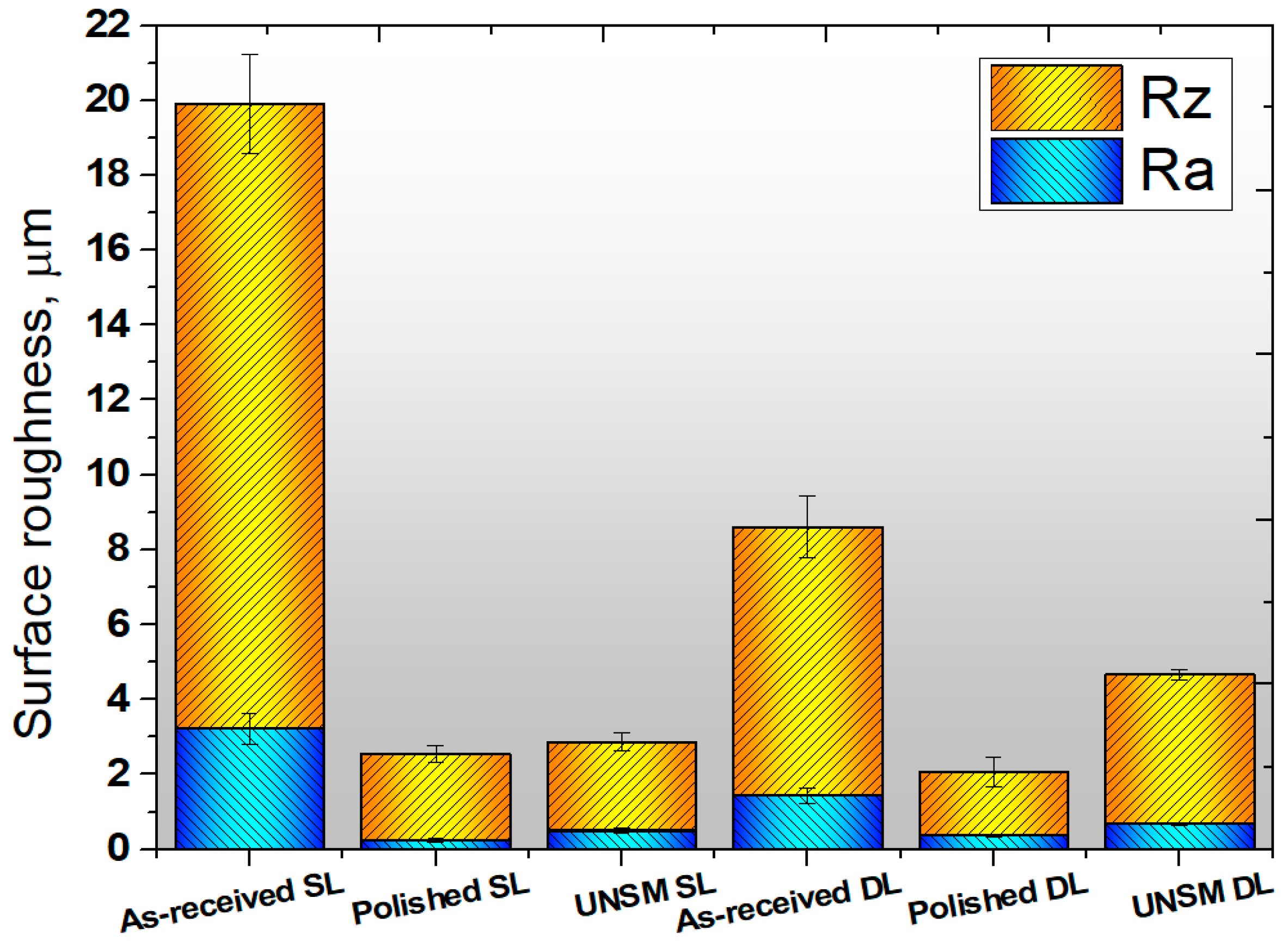 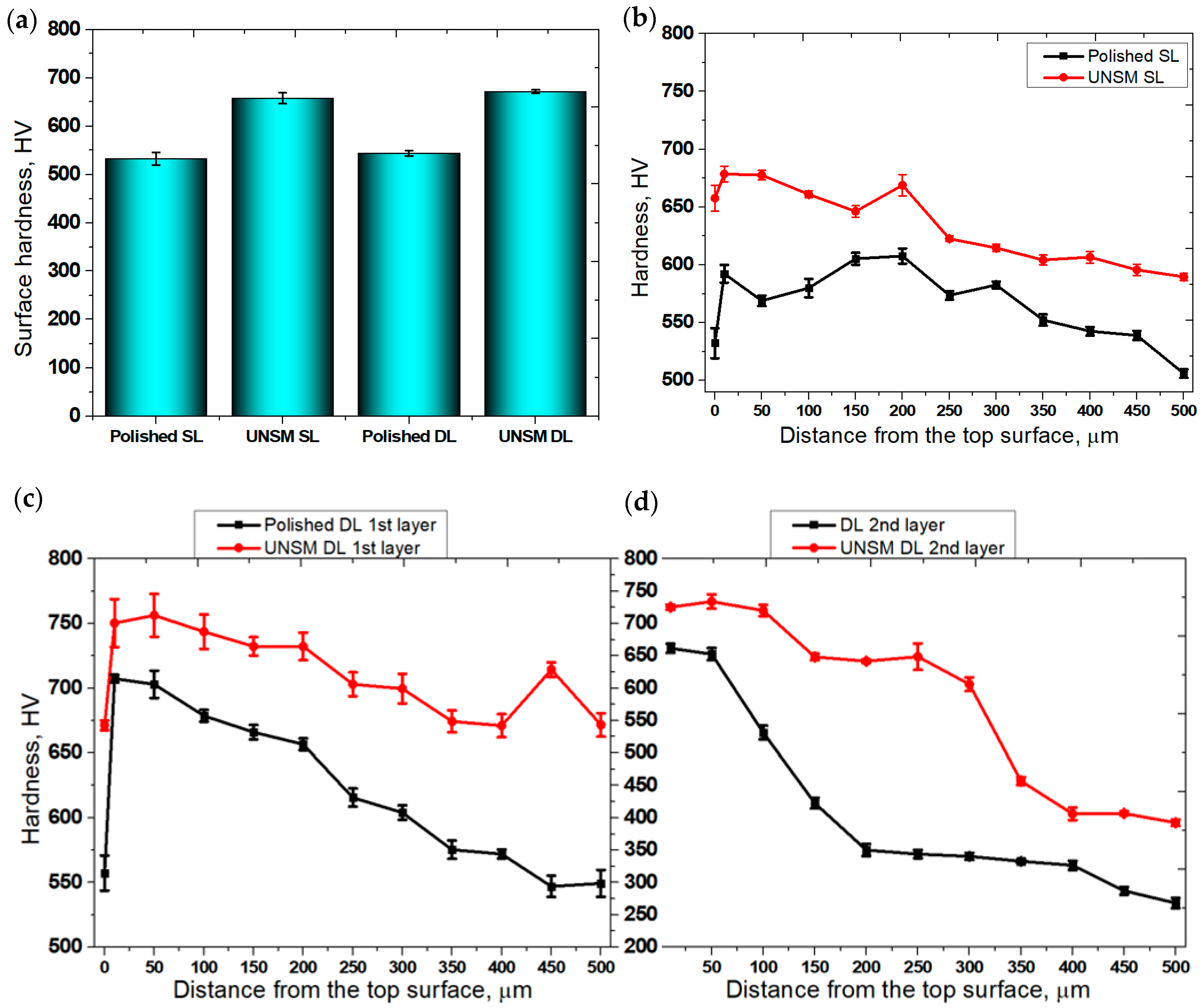 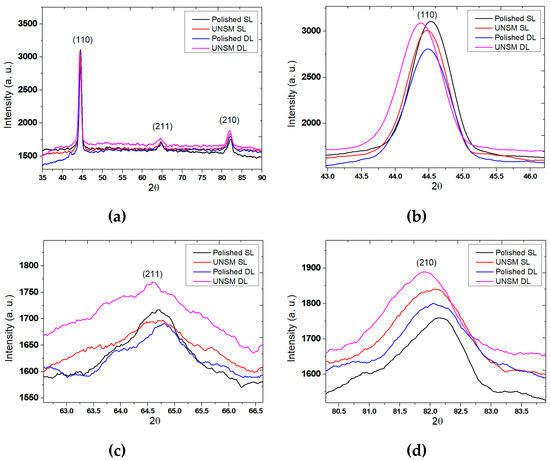 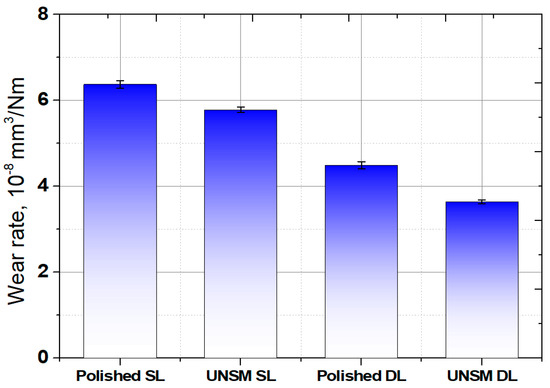 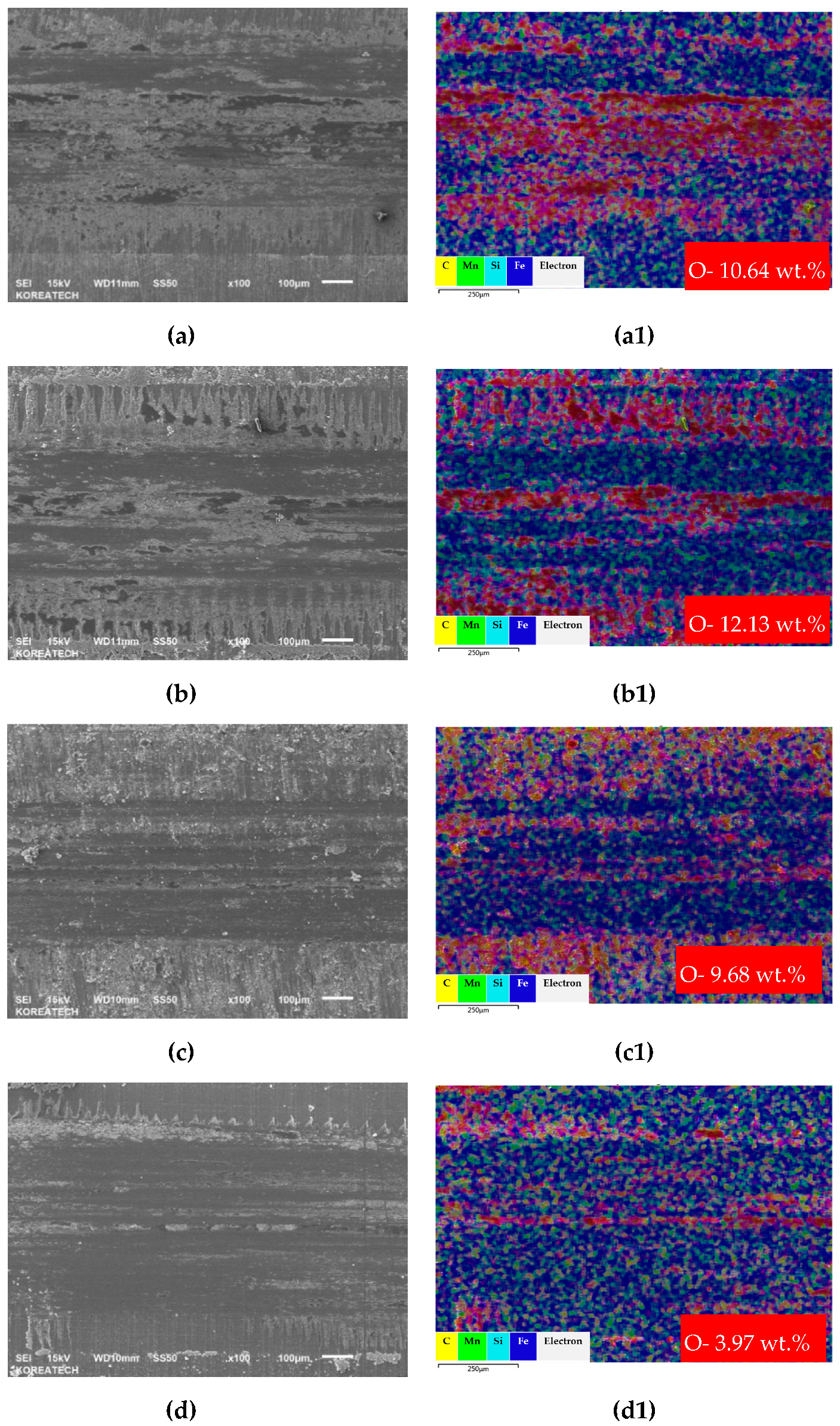