Cigarette butts (CBs) are the most commonly littered waste material in the world. It is estimated that over 5.7 trillion cigarettes are consumed worldwide each year. Consequently, millions of tonnes of highly toxic waste are contaminating the environment. CBs are composed of cellulose acetate filters—a polymer with poor biodegradability—and which, depending upon the environmental conditions, can take many years to decompose. In this study, fired clay bricks were manufactured with 0.5%, 1%, 1.5%, and 2% CBs by mass and tested against control bricks with 0% CBs. The results revealed a decrease in compressive strength from 48.6 MPa for 0% CB content bricks to 30.8 MPa for 1% CB content bricks, and a decrease in dry density with the increase in CB content, from 2114 kg/m3 for the control bricks to 1983 kg/m3 and 1969 kg/m3 for 1% and 2% CB content bricks. The highest value of water absorption appeared for 2% CB content bricks, which reached an absorption rate of 13.1% compared to 9% for the control bricks. The energy required during the firing process was calculated with a saving of up to 10.20%, for bricks incorporating 1% CBs. The thermal conductivity of the samples showed a reduction of 17% from 1.078 to 0.898 W m−1·K−1 with the addition of 1% CBs. In addition, the manufactured bricks were tested for efflorescence, an initial rate of absorption (IRA), microstructural analysis, and shrinkage. A life-cycle assessment (LCA) is recommended to analyze the environmental impacts of bricks incorporating CBs. View Full-Text
Keywords: recycling; cigarette butts; fired clay bricks; energy saving; brick manufacturing recycling; cigarette butts; fired clay bricks; energy saving; brick manufacturing
►▼ Show Figures 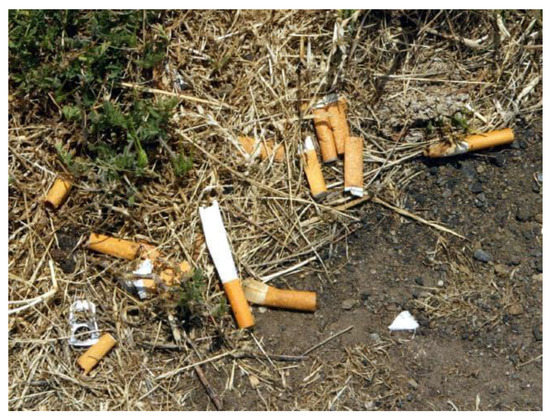