An InAs/InGaAs quantum dot laser with a heterostructure epitaxially grown on a silicon substrate was used to fabricate injection microdisk lasers of different diameters (15–31 µm). A post-growth process includes photolithography and deep dry etching. No surface protection/passivation is applied. The microlasers are capable of operating heatsink-free in a continuous-wave regime at room and elevated temperatures. A record-low threshold current density of 0.36 kA/cm2 was achieved in 31 µm diameter microdisks operating uncooled. In microlasers with a diameter of 15 µm, the minimum threshold current density was found to be 0.68 kA/cm2. Thermal resistance of microdisk lasers monolithically grown on silicon agrees well with that of microdisks on GaAs substrates. The ageing test performed for microdisk lasers on silicon during 1000 h at a constant current revealed that the output power dropped by only ~9%. A preliminary estimate of the lifetime for quantum-dot (QD) microlasers on silicon (defined by a double drop of the power) is 83,000 h. Quantum dot microdisk lasers made of a heterostructure grown on GaAs were transferred onto a silicon wafer using indium bonding. Microlasers have a joint electrical contact over a residual n+ GaAs substrate, whereas their individual addressing is achieved by placing them down on a p-contact to separate contact pads. These microdisks hybridly integrated to silicon laser at room temperature in a continuous-wave mode. No effect of non-native substrate on device characteristics was found. View Full-Text
Keywords: semiconductor laser; microdisk laser; quantum dots; III–V on Si semiconductor laser; microdisk laser; quantum dots; III–V on Si
►▼ Show Figures 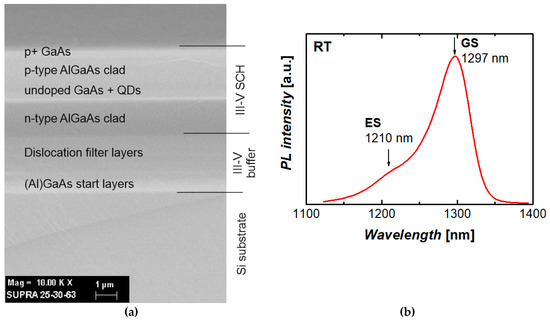