Thermal and Electronic Transport Properties of the Half-Heusler Phase ScNiSb

Thermoelectric properties of the half-Heusler phase ScNiSb (space group F3m) were studied on a polycrystalline single-phase sample obtained by arc-melting and spark-plasma-sintering techniques. Measurements of the thermopower, electrical resistivity, and thermal conductivity were performed in the wide temperature range 2–950 K. The material appeared as a p-type conductor, with a fairly large, positive Seebeck coefficient of about 240 μV K−1 near 450 K. Nevertheless, the measured electrical resistivity values were relatively high (83 μΩm at 350 K), resulting in a rather small magnitude of the power factor (less than 1 × 10−3 W m−1 K−2) in the temperature range examined. Furthermore, the thermal conductivity was high, with a local minimum of about 6 W m−1 K−1 occurring near 600 K. As a result, the dimensionless thermoelectric figure of merit showed a maximum of 0.1 at 810 K. This work suggests that ScNiSb could be a promising base compound for obtaining thermoelectric materials for energy conversion at high temperatures. View Full-Text
Keywords: Heusler alloys; thermoelectric; ScNiSb Heusler alloys; thermoelectric; ScNiSb
►▼ Show Figures 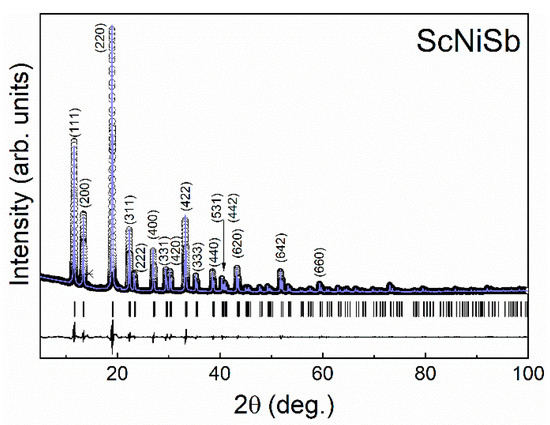