Bone is an engineering marvel that achieves a unique combination of stiffness and toughness exceeding that of synthesized materials. In orthopedics, we are currently challenged for the child population that needs a less stiff but a tougher bone substitute than adults. Recent evidence suggests that the relationship between inter-molecular connections that involve the two main bone building blocks, TropoCollagen molecules (TC) and carbonated Hydroxyapatite (cAp), and bone macroscopic mechanical properties, stiffness and toughness, are key to building bone substitute materials for children. The goal of our study is to establish how inter-molecular connections that occur during bone mineralization are related to macroscopic mechanical properties in child bones. Our aim is to link the biological alterations of the TC-cAp self assembly process happening during bone mineralization to the bone macroscopic mechanical properties’ alterations during aging. To do so, we have developed a multiscale mathematical model that includes collagen cross links (TC–TC interface) from experimental studies of bone samples to forecast bone macroscopic mechanical properties. Our results support that the Young’s modulus cannot be a linear parameter if we want to solve our system. In relation to bone substitute material with innovative properties for children, our results propose values of several biological parameters, such as the number of crystals and their size, and collagen crosslink maturity for the desired bone mechanical competence. Our novel mathematical model combines mineralization and macroscopic mechanical behavior of bone and is a step forward in building mechanically customized biomimetic bone grafts that would fit children’s orthopedic needs.
Keywords: mathematical model; mechanical behavior; children’s bone grafts mathematical model; mechanical behavior; children’s bone grafts

Our model is inspired by Komarova et al. [25]. They proposed a model that evolves over time where collagen maturation is described by immature collagen matrix () maturing to collagen matrix (). Mineral is described by Hydroxyapatite (y), the main mineral in bone. Interaction between mineral and collagen maturation is modeled, on the one hand, by Inhibitors (I), which are molecules inhibiting mineralization, and, on the other hand, by Nucleators (N), initiating the mineral precipitation. Their general model given in System (1) and represented in Figure 1 is given with specific values of parameters to fit data (see [25]) by at any time . In the following, we keep the parameters values estimated by Komarova et al. to allow comparisons with their results.

This is also given by the following system adapted from System (3) with our new model as described in the introduction and the experimental relationship [17], for :
We propose our new model as an improvement of the one introduced by Komarova et al. However, ours is more complex, so we decided not to analyze the system of partial differential equations or the asymptotic behavior of the distributions and when t goes to infinity. Our objective here was to compare our model to the one proposed by Komarova et al. and to extend it to bone macroscopic mechanical properties (multiscale modeling). For this purpose, we have integrated the system with respect to the structure variables a and x and analyzed the coupled system of non-linear differential equations. This is developed in Section 3.1.

Using functions V et k given in Section 3.2, straightforward numerical simulations give qualitative behavior of inhibitors , nucleators , and function in Figure 3.
Evolutions of collagens and are represented in Figure 4, while evolutions of total population M(t) and P(t) are shown in Figure 5.
It is quite straightforward to see the evolution of crystal mean size in time (see Figure 6). It is clear to see that this mean size reaches a threshold at equilibrium.

For the numerical illustration of the qualitative behavior of macroscopic mechanistic properties of the bone depending on the molecular dynamics of its structure, we have to set up a relationship between the two scales. In other words, the parameters n and of Equation (2) of model from Ott et al. need to be linked as follows: with non-decreasing with respect to F and non-increasing in function of M. The term on the other hand is a non-increasing function of F and non-decreasing with respect to M. For instance, n and are suggested here to be given by and
A table that contains the different values of F and M by varying t is given in Table 1 below. These values have been used in each graph (from (a) to (e)) of Figure 7 which corresponds to the different time points (from 0.1 to 2.2). The last graph (bottom right) of Figure 7 summarizes all these representations in one.
Finally, the term is described as a non-increasing function of F and the non-decreasing function of M. For instance, E can be taken as

By using the characteristics method for (4), we obtain the following expression of c
Let us denote, for ,
Both and are the total populations of collagen and mineral, respectively, and corresponds to the mass of mineral in the bone we study. The expression (11) leads, for , to
We integrate Equation (7) over the size variable x. Moreover, we take into account that , which means that there does not exist any minerals of infinite size, and seems biologically reasonable. We obtain, for ,
Thanks to the Fubini’s theorem, we obtain, for ,
Then,
The equation of is obtained as above by multiplying Equation (7) by the size variable x and then integrate it over x. We obtain, for ,
We can compute the nonlocal term and we obtain, for ,
Therefore, the equation of becomes

Our aim is only to study our model in a qualitative way and compare it with the model given in [25]. This is why we keep parameters as close as possible to the ones used by those authors. However, we had to choose growth velocity function V to have the properties given in the previous section, that is equal to 0 when , then increasing to a certain threshold, then decreasing when s is equal to 1. We chose the following function:
For function k, influence from inhibitors and nucleators are as follows: inhibitors are supposed to decrease aggregation, while nucleators increase them. We describe it with the following formulation:
Finally, values for maturation threshold is chosen to be and the value of parameter . Representations of function V and k are given in Figure 8.

Our new model links bone matrix mineralization and bone mechanical properties at the macroscopic level. Our results show the feasibility of linking these two systems with a multiscale approach and by taking into account a simple modeling hypothesis. Furthermore, our results support that the Young’s modulus cannot be a linear parameter if we want to solve our system. This finding supports that bone elasticity is not a linear phenomenon. In relation to bone substitute material with innovative properties for children, our results propose values of several biological parameters, such as the number of crystals and their size and the collagen crosslink maturity from the desired bone mechanical competence. Thus, our model lays the groundwork to provide new knowledge for building bone substitute material for the child population.
References

The authors would like to thank Mary Koeth for English language revision of the manuscript. 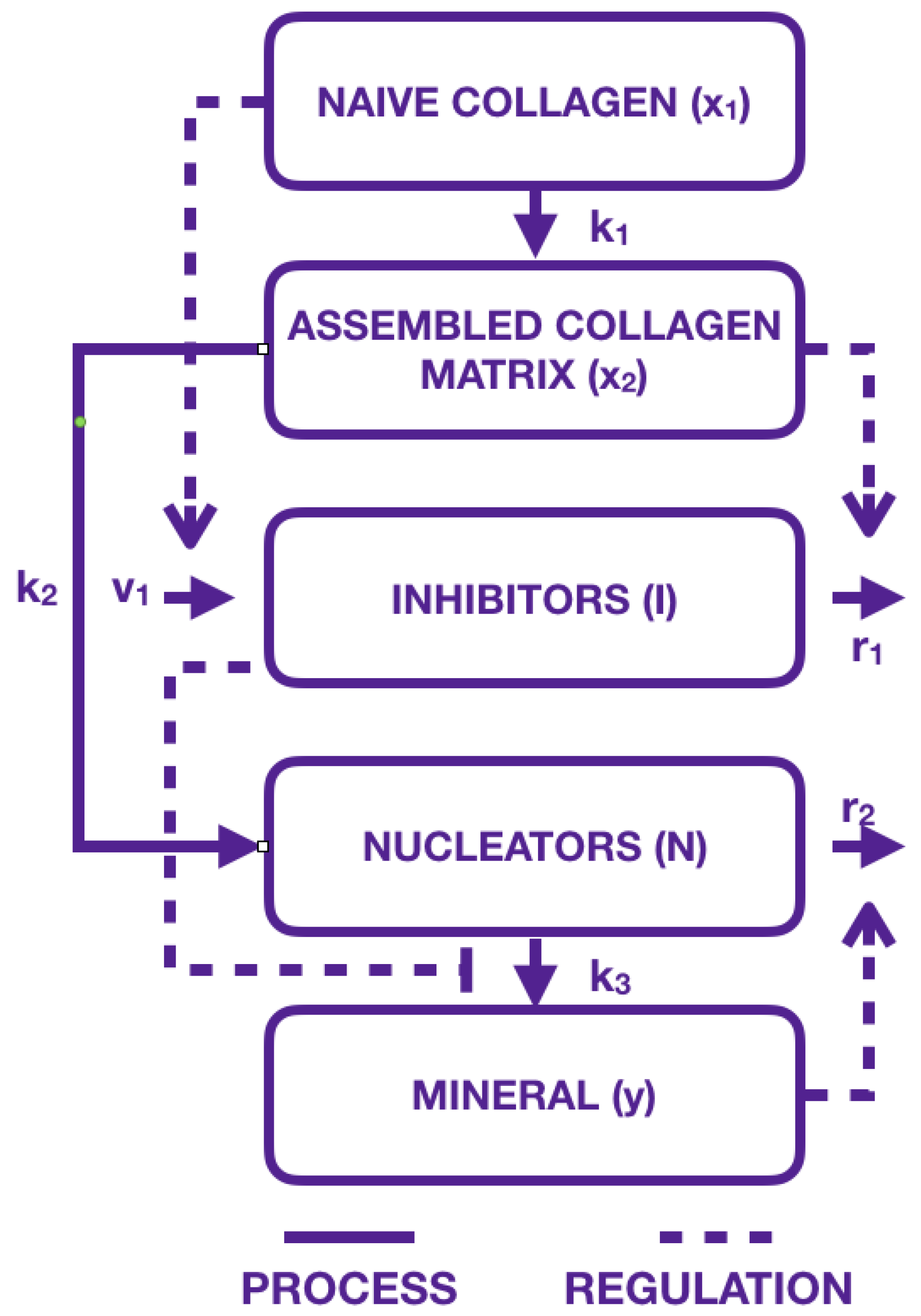 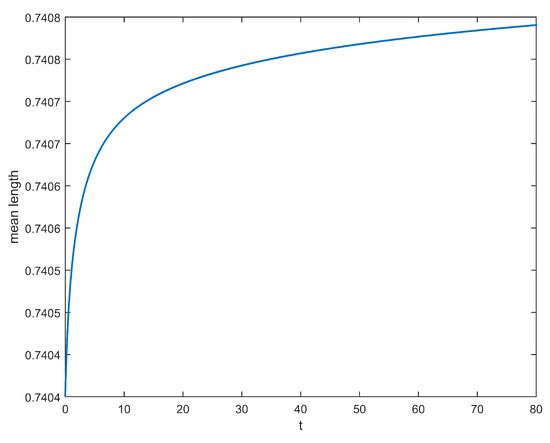 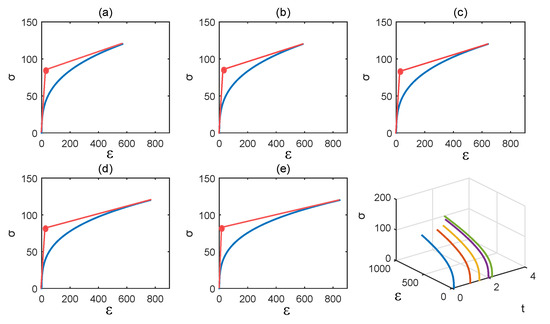