Linear Versus Nonlinear Acoustic Probing of Plasticity in Metals: A Quantitative Assessment

The relative dislocation density of aluminum and copper samples is quantitatively measured using linear Resonant Ultrasound Spectroscopy (RUS). For each metallic group, four samples were prepared with different thermomechanical treatments in order to induce changes in their dislocation densities. The RUS results are compared with Nonlinear Resonant Ultrasound Spectroscopy (NRUS) as well as Second Harmonic Generation (SHG) measurements. NRUS has a higher sensitivity by a factor of two to six and SHG by 14–62%. The latter technique is, however, faster and simpler. As a main result, we obtain a quantitative relation between the changes in the nonlinear parameters and the dislocation density variations, which in a first approximation is a linear relation between these differences. We also present a simple theoretical expression that explains the better sensitivity to dislocation content of the nonlinear parameters with respect to the linear ones. X-Ray diffraction measurements, although intrusive and less accurate, support the acoustics results. View Full-Text
Keywords: alloys; nondestructive testing; dislocation density; plasticity; ultrasound; nonlinear acoustics alloys; nondestructive testing; dislocation density; plasticity; ultrasound; nonlinear acoustics
►▼ Show Figures 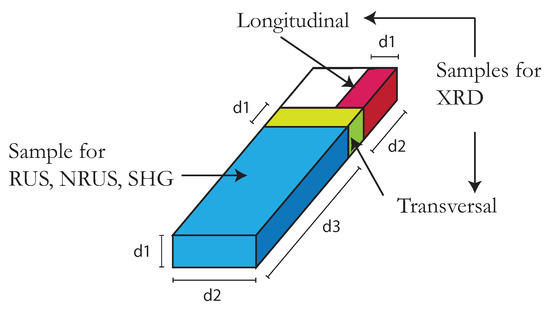