This paper reviews the formation of nanoscale V-shaped pits on GaN-based light emitting diodes (LEDs) grown by the metal organic chemical vapor deposition (MOCVD) system and studies the effect of V-shaped pits on quantum efficiency. Since V-pits could provide potential barriers around threading dislocations to lessen non-radiative recombinations in such a high defect environment. In our study, multiple InGaN/GaN quantum well samples with different emission wavelengths of 380, 420, 460, and 500 nm were grown, each with different nanoscale V-shaped pits of three diameters for 150, 200, and 250 nm, respectively. It was found that the multiple quantum well (MQW) sample with larger V-pits had a lower pit density, but a relatively larger total V-pits defected area. The optimum diameter of V-pits showing the highest quantum efficiency from the MQW sample depended on the emission wavelength. MQW samples with wavelengths of 380 and 500 nm exhibited the best internal quantum efficiency (IQE) performance at the smallest V-pits area; however, the best performance for MQW samples with wavelength around 420 and 460 nm occurred when large V-pit areas were presented. Photoluminescence (PL) peak shifts and Raman shifts can provide a relationship between quantum-confined Stark effect (QCSE) and IQE, as well as a comparison between strain and IQE. The results obtained in this phenomenological study shall provide a useful guide line in making high-performance GaN-based LEDs with wide emission spectra. View Full-Text
Keywords: light emitting diodes (LEDs); GaN; multiple quantum wells (MQWs) light emitting diodes (LEDs); GaN; multiple quantum wells (MQWs)
►▼ Show Figures 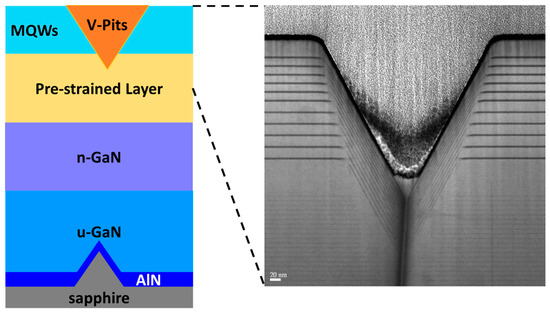