Auxeticity of Yukawa Systems with Nanolayers in the (111) Crystallographic Plane

A tubular composite structure that is built of two materials, characterized by different Young moduli, is analysed in this paper. The Young’s modulus of one of these materials can be controlled by external conditions e.g., magnetic or electric field, temperature etc. The geometry of the reinforcement is based on typical auxetic re-entrant honeycomb cellular structure. The influence of this external factor on the behaviour of the stretched tube is analysed in this paper. Also, the possibility of creating a tubular composite structure whose cross-section is either shrinking or expanding, while stretching the tube is presented.
Keywords: tunable; auxetic; composite; tube; stent; thermoauxetic; magnetorheological tunable; auxetic; composite; tube; stent; thermoauxetic; magnetorheological

2. Composite Structure of the Tube

Numerical analysis was performed with the use of Comsol Multiphysics FEM software. Linear elastic materials are assumed for both of the materials. The mesh was built of about 20,000 tetrahedral elements. Geometrical parameters of the tube: Rm = 1, Nc = 6, Nz = 10, ta = 0.1, th = {0, 0.2}. The aim of the analysis is to present the influence of the change of reinforcement elastic modulus on the behaviour of the tube.

In the first case, the results were obtained for the case, in which th = 0, which means that the tube’s wall is of the same thickness as the reinforcement layer so no additional inner and outer layer occur. The volumetric share of the phase of the reinforcement = 0.43. The change of the inner radius Rw of the stretched tube with respect to the Young’s moduli ratio is presented in the Figure 2. Several values of the Poisson’s ratio of the reinforcement material are presented in order to investigate the influence of this parameter, as well while the value of the Poisson’s ratio of the matrix is kept constant νM = 0.3. The dashed line in the plot represents the inner radius of the tube before deformation, just for the reference. If the ratio ER/EM = 1 and νR = νM, then the tube is built of isotropic homogenous material and it behaves as such.
One can observe that as the ER/EM diverge from 1 the radius of the tube also starts changing. However, the influence of the ratio ER/EM is far more significant if the ratio is greater than 1, which means that the material of the reinforcement is stiffer. This effect results from the fact that the reinforcement material creates auxetic structures, and the stiffer the reinforcement, the stronger it influences the behaviour of the whole tube. It is clearly noticeable that it is possible to obtain a tube that would either shrink or expand depending on the external factor that would change the reinforcement Young’s modulus. Moreover, such change is possible even for a relatively small change of this Young’s modulus, If ER is greater than EM by about one order of magnitude, then we can obtain a tube that would change its radius from 0.93 up to 0.97, which means that the cross-section of the tube would change by almost by 10%. Furthermore, a very interesting result is obtained in the case in which the ratio is changed to its reciprocal so that the matrix is stiffer than the auxetic reinforcement. The tube behaves similarly to the one with stiffer reinforcement, although the effect of changing the Young’s moduli ratio is smaller.
The value of the Poisson’s ratio of the reinforcing material was also studied, and, naturally, it also influences the behaviour of the whole composite. The impact of changing the value of νR decreases as the ratio ER/EM diverge from 1. For a completely isotropic material of the tube, the diameter of the stretched tube is minimal, however, this relation is dependent on the Poisson’s ratio. In the case of νR = 0.49, the minimum value of the radius is obtained if the value of the ratio ER/EM < 1. For all the values of νR < 0.3 the minimum radius of the deformed tube is obtained if ER/EM > 1. It is clearly noticeable that the value of νR is also significant, and it enhances the auxetic behaviour of the reinforcement structure as νR tends to −1. In consequence, lower values of νR diminish the effect of the changing ER/EM ratio. For clarity reasons it was assumed that the external factor influences only the ER/EM ratio. So, in each case of νR, the ER/EM ratio was the only control variable. It is important, however, to remember that the Poisson’s ratio can be also dependant on such phenomena as a magnetic field, electric field, or temperature. Hence, the radius of the tube could change in a wider range if both Young’s modulus ratio and the values of the Poisson’s ratio were controlled simultaneously by this external factor.
The shape of the deformed cross section is presented for two cases. In Figure 3, the cross-sectional shape of the tube is presented for the following set of parameters: ER/EM = 0.001, νR = νM = 0.3, th = 0. The cross-sectional shape for the same parameters but the ratio of Young’s moduli changed ER/EM = 1000 is presented in the Figure 4. The selected cross-section lays in the plane of tube symmetry. The stiffness of the auxetic reinforcement is far smaller than the stiffness of the matrix material. The stresses are concentrated in the area of the matrix in the case of ER/EM = 0.001, while for ER/EM = 1000, the highest values of von Mises stresses occur at the corners of the auxetic structure. Additional red arrows show the directions of displacements so that it is clearly noticeable that the first tube shrinks while the latter expands.

In the second analysis, the same auxetic structure is embedded in the matrix material so that th = 0.2 and the volumetric share of the reinforcement material = 0.15. The change of the inner radius of the tube Rw with respect to ER/EM ratio for selected values of νR is presented in the Figure 5. For such a composite, it is still possible to influence its behaviour by changing the ER/EM ratio, however, significant change is obtained only if ER/EM > 1. Since the share of the reinforcement phase is much smaller than in the first case, the effect of its auxetic structure is suppressed if it is made of softer material i.e., the ratio ER/EM < 1. Hence, the effect of increasing the inner radius Rw if the ER/EM tends to 0.001 is not observed in this case. Furthermore, the influence of the νR diminishes with the decrease of ER/EM, and it becomes negligibly small for ER/EM < 0.1. Likewise, the first case of the composite tube, this one is also capable of changing the inner radius by ca. 10% if the ER/EM change by about one order of magnitude (e.g., from 12 to 120). It is worth noting that this behaviour is only slightly influenced by the value of νR, although the value of the inner radius depends on it.
The shape of the deformed tube’s cross-section is presented in the Figure 6 in the case of ER/EM = 0.001, whereas Figure 7 shows the cross-sectional shape for ER/EM = 1000 is presented in Figure 7. The highest values of stresses concentrate in the area of the matrix along the interface between phases in the case of ER/EM = 0.001. If the Young’s modulus of the reinforcement is higher than the one of the matrix i.e ER/EM = 1000, then the highest values of the stresses occur at the corners of the auxetic reinforcement, as it occurred for the geometry with th = 0.
The values of effective Poisson’s ratio of the composite were also calculated (see Figure 8). Since the value of the effective Poisson’s ratio is strongly related to the change of the tube’s radius, the plot in the Figure 8 resembles the plot in the Figure 5.

In this paper, a composite tube that is reinforced with auxetic structure is studied by means of Finite Element Analysis. The reinforcement of the tube is assumed to be made of the material whose Young’s modulus can be controlled by external factor e.g., magnetic field, temperature, or other physical phenomena, while the other Young’s modulus is constant. Hence, the ratio of both Young’s moduli changes as well. The change of this ratio allows for controlling the deformation of the composite tube. The shape of reinforcement is designed as auxetic re-entrant structure. Two cases of the tube are considered. In the first case, the tube’s wall is only as thick as the reinforcement layer, and the matrix materials fill the voids of the auxetic structure. The results indicate that the diameter of the stretched tube can change about 10% as a result of the external field applied. In the second analysis, the reinforcement is embedded in the matrix material so the influence of its auxetic geometry is diminished. Yet, the results obtained indicate that it is also possible to control the diameter of such a tube in the range of about 10%, although the changes are limited to the case in which the value of Young’s modulus of the reinforcement is greater than the Young’s modulus of the matrix. Further research will be conducted in order to investigate the behaviour of such structure under different types of loading.
The reinforcement can be completely embedded in the matrix i.e., it is possible to isolate it from the surroundings if necessary.

This work was supported by grants of the Ministry of Science and Higher Education in Poland: 02/21/DSPB/3494/2017. The simulations have been carried out at the Institute of Applied Mechanics, Poznan University of Technology. 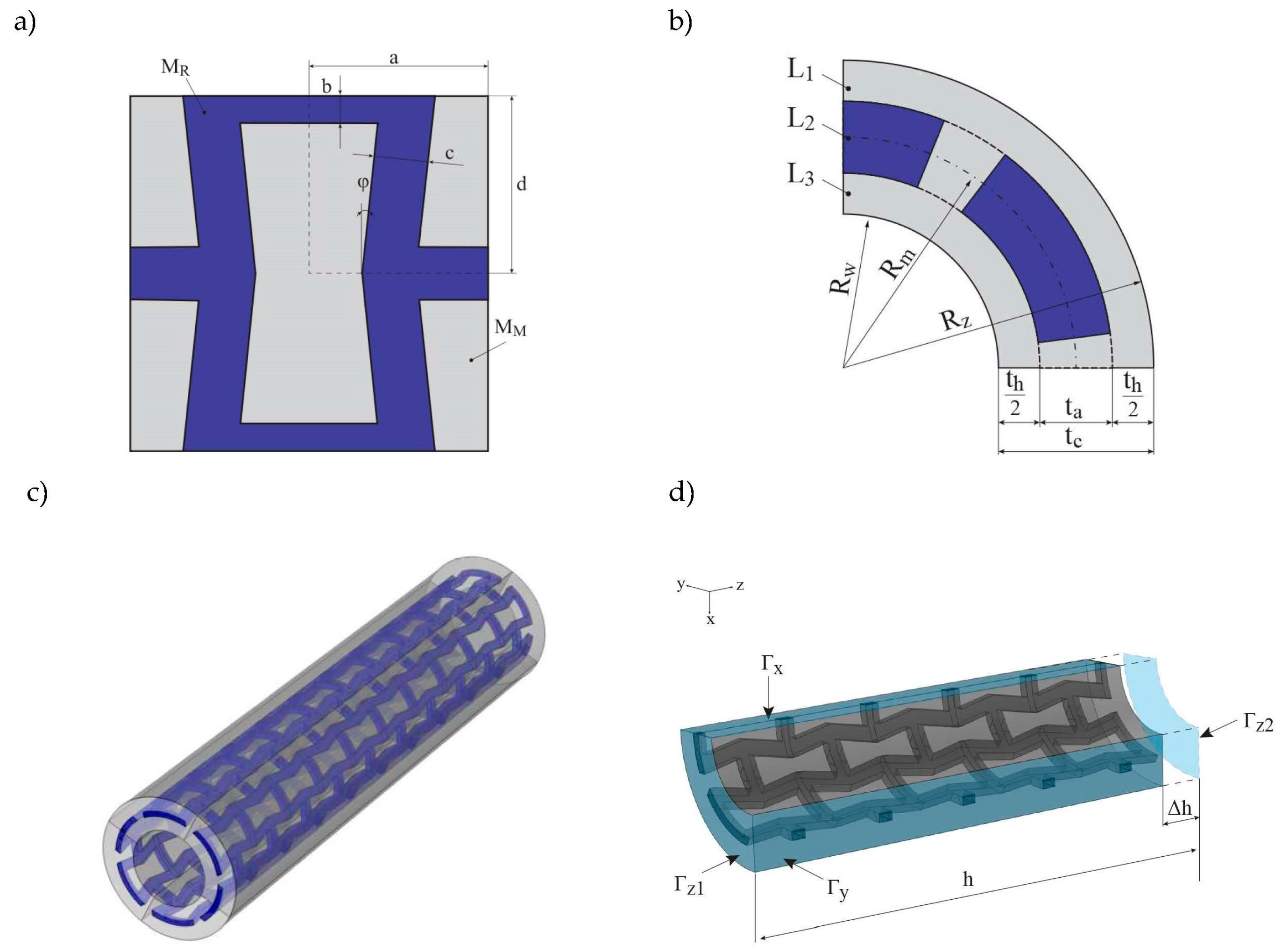 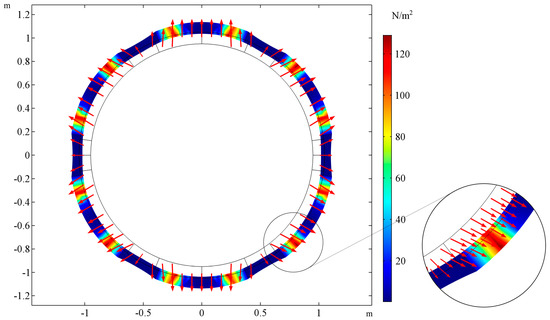 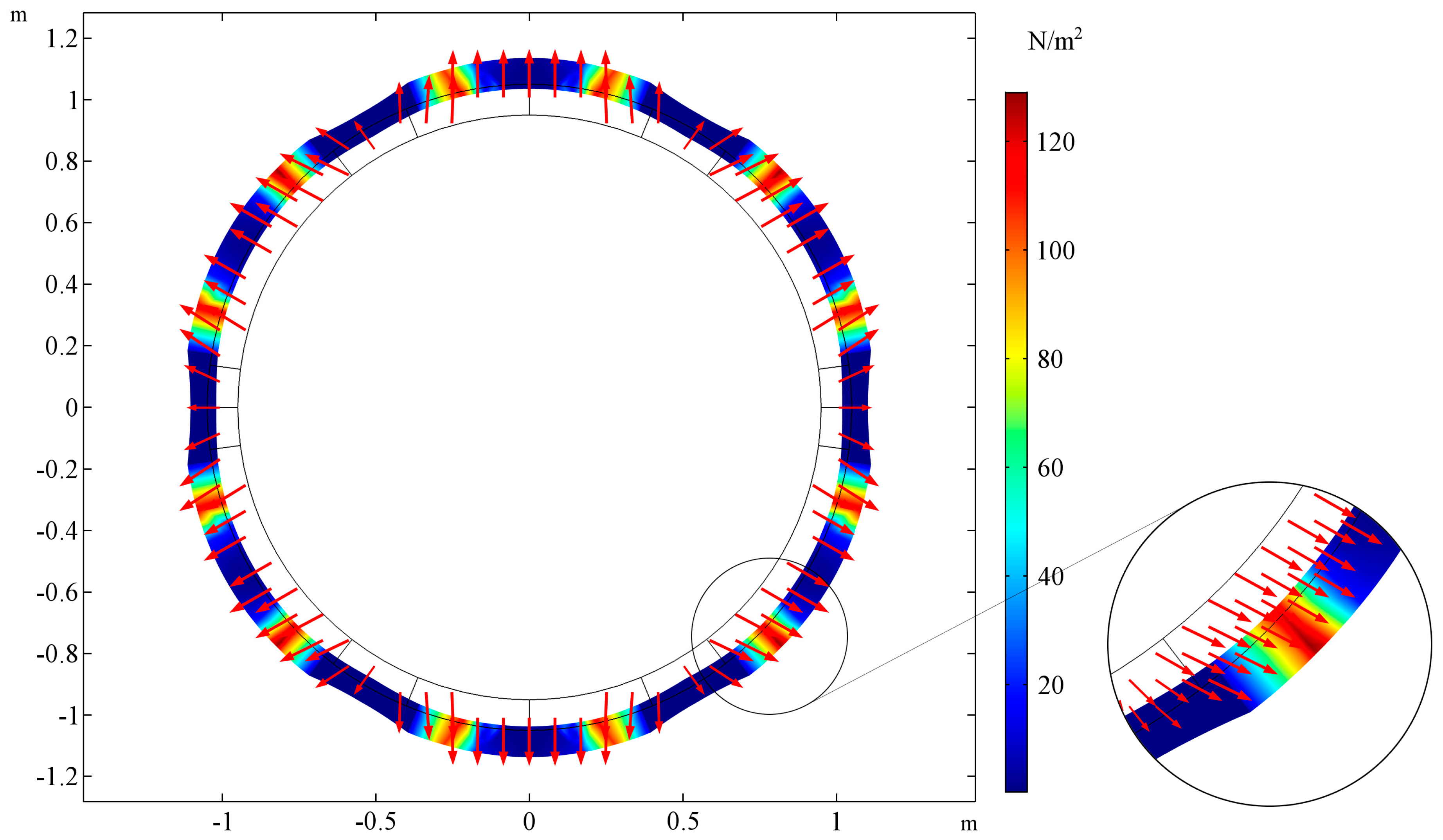 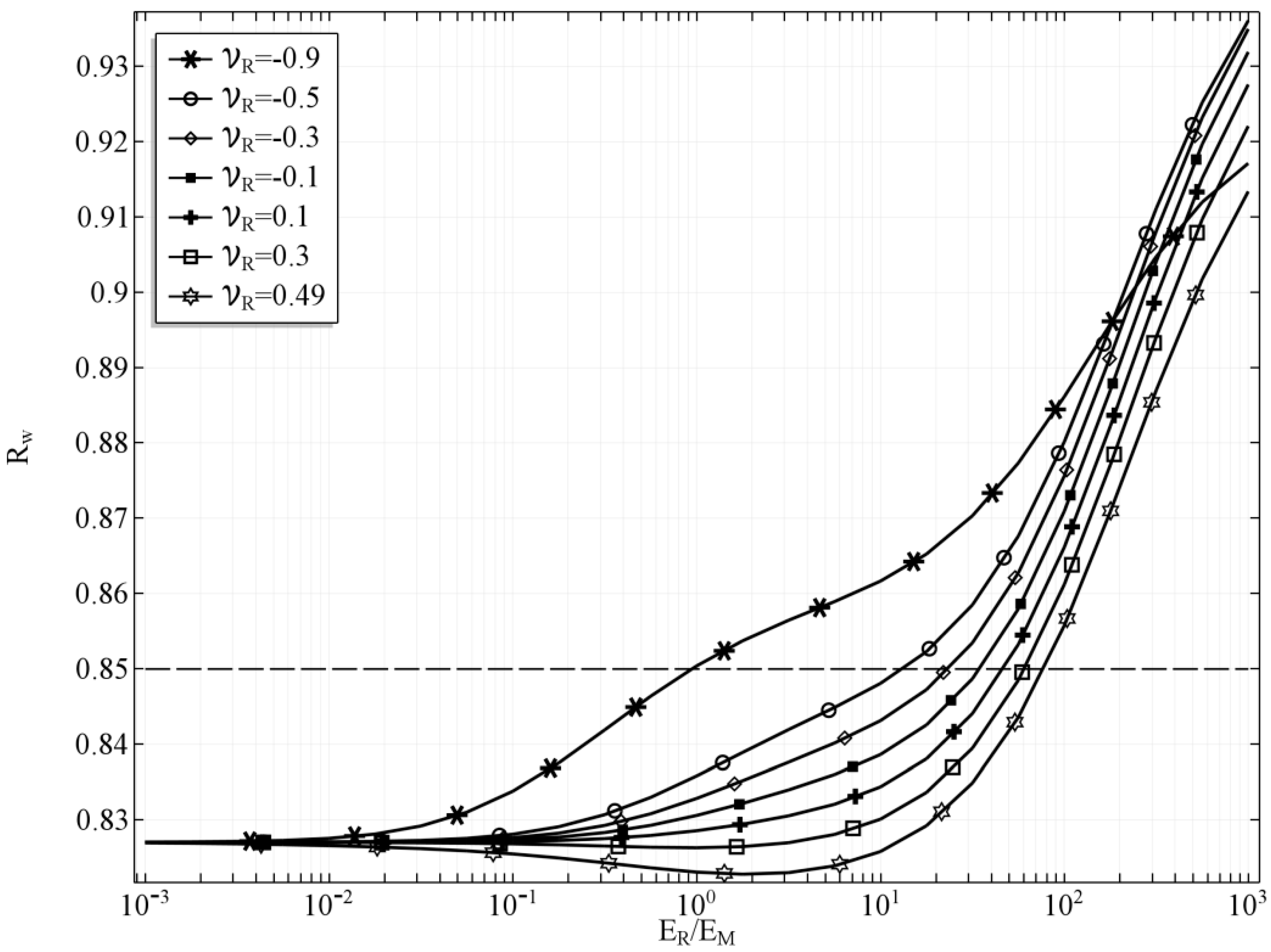 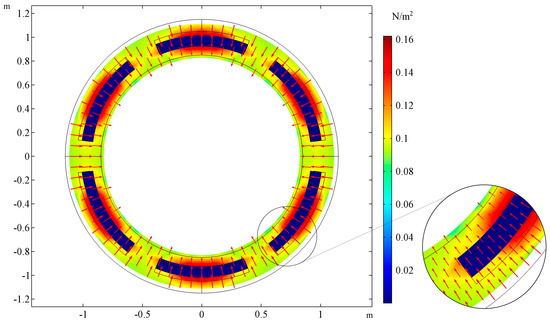 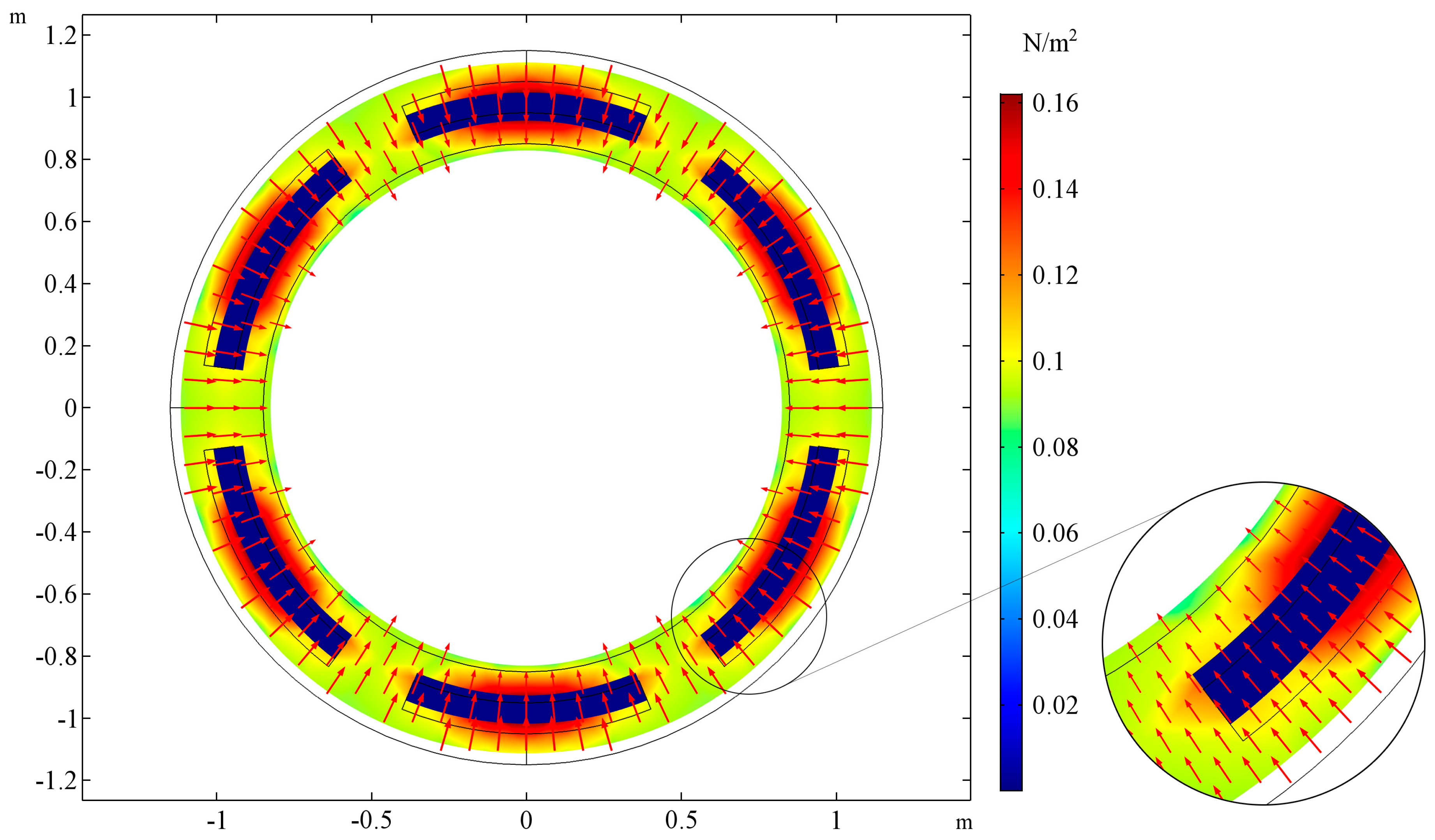 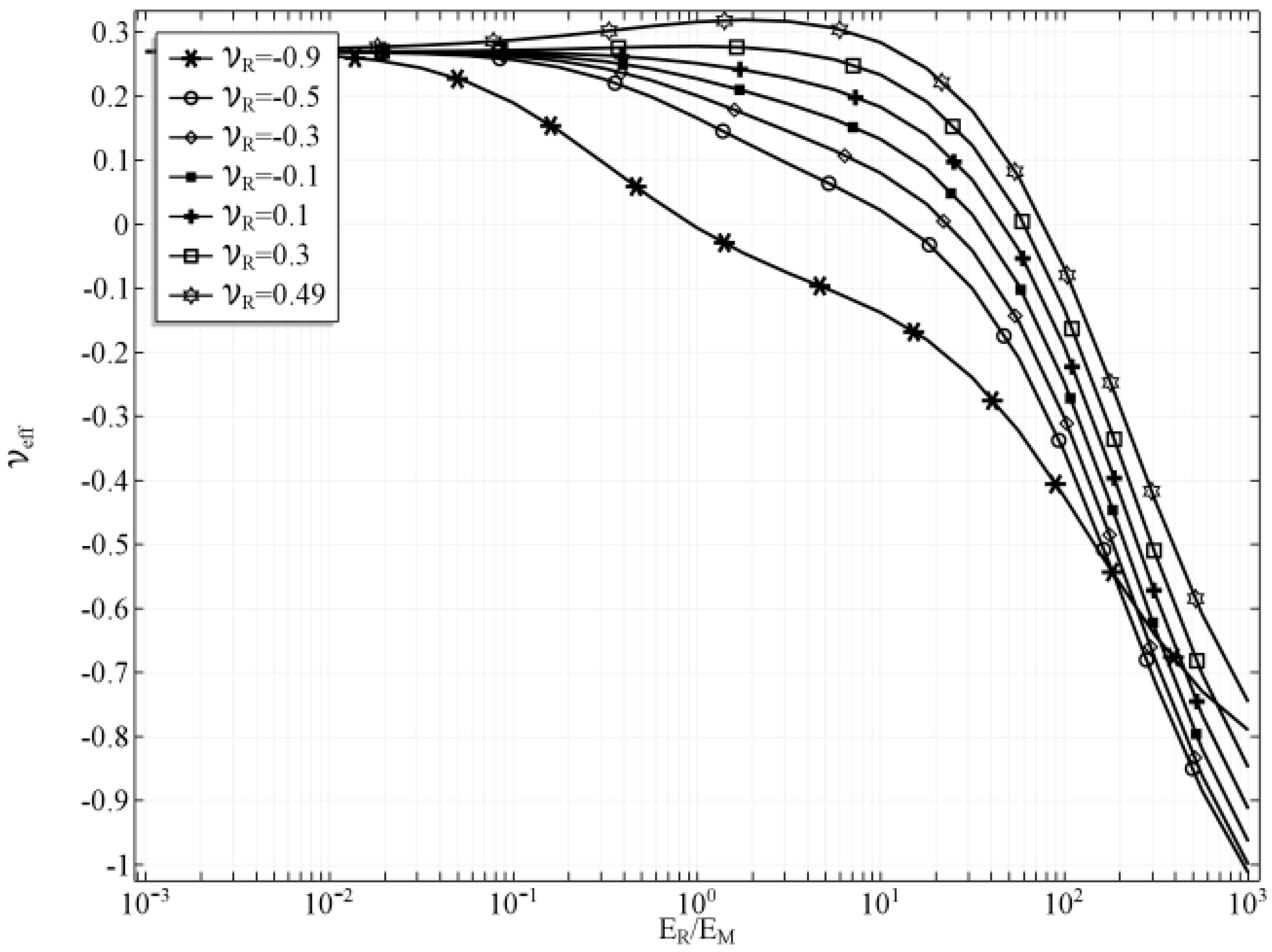