This study investigates the dissolution behavior as well as the surface biomineralization in simulated body fluid (SBF) of a paste composed of glycerol (gly) and a bioactive glass in the system CaO-MgO-SiO2-Na2O-P2O5-CaF2 (BG). The synthesis of the bioactive glass in an alumina crucible has been shown to significantly affect its bioactivity due to the incorporation of aluminum (ca. 1.3–1.4 wt %) into the glass network. Thus, the kinetics of the hydroxyapatite (HA) mineralization on the glass prepared in the alumina crucible was found to be slower than that reported for the same glass composition prepared in a Pt crucible. It is considered that the synthesis conditions lead to the incorporation of small amount of aluminum into the BG network and thus delay the HA mineralization. Interestingly, the BG-gly paste was shown to have significantly higher bioactivity than that of the as-prepared BG. Structural analysis of the paste indicate that glycerol chemically interacts with the glass surface and strongly alter the glass network architecture, thus generating a more depolymerized network, as well as an increased amount of silanol groups at the surface of the glass. In particular, BG-gly paste features early intermediate calcite precipitation during immersion in SBF, followed by hydroxyapatite formation after ca. seven days of SBF exposure; whereas the HA mineralization seems to be suppressed in BG, probably a consequence of the incorporation of aluminum into the glass network. The results obtained within the present study reveal the positive effect of using pastes based on bioactive glasses and organic carriers (here alcohols) which may be of interest not only due to their advantageous visco-elastic properties, but also due to the possibility of enhancing the glass bioactivity upon surface interactions with the organic carrier. View Full-Text
Keywords: bioactive glass; bioactive glass pastes; organic carriers; bioactivity; hydroxyapatite (HA); HA mineralization bioactive glass; bioactive glass pastes; organic carriers; bioactivity; hydroxyapatite (HA); HA mineralization
►▼ Show Figures 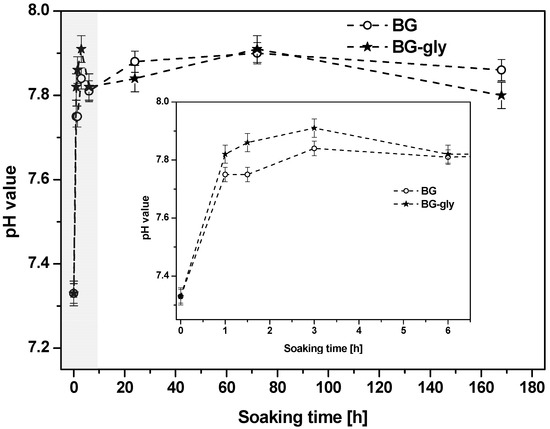