The efficiency of the combustion system producing the energy depends on processes such as ash adhesion and ash removal. These processes lead to ash deposits creation on the heat exchanger tubes and in the gas circuit (slagging and fouling process). The formation of ash deposits on the surface of boilers and heat exchangers reduces the heat transfer rate and therefore the efficiency of the whole system. For this reason, it is important to study the slagging and fouling processes. These processes are mainly caused by reactive alkaline and alkaline earth compounds found in coal and in a relatively large amount of biomass.
The amount of alkaline elements significantly influences the mechanism of mineral matter transformation during the coal and biomass combustion process. These problems have been widely described and discussed by many authors, in particular during biomass combustion [1,2,3,4] and during coal combustion [5,6,7,8].
Slagging and fouling processes are closely associated with the ash fusion behavior—mainly with the melting of ash. The ash sintering process takes place on the microstructure level of the ash. But from a microscopic point of view, it is a very inhomogeneous material. The individual particles of the ash have different shapes, different chemical compositions, and different crystallographic structures. Then, it is very difficult to find a method that can predict the temperature at which this ash starts to be viscous and starts, therefore, to make the fouling or slagging on the surfaces of heat exchangers. The main mechanism of the ash sintering process is the melting of the surface of individual ash particles. The ash particles with melted surface coalescent as a result of minimization of the surface tension [6,9,10]. The formation of ash deposits—slagging in the radiative region and fouling in the convection region of the combustion system can cause consequences such as deterioration of heat transfer, damage of boiler surfaces, and even shutdown of the boiler [11,12]. It is interesting that the ash deposit buildup is rather related to ash physicochemical properties, while its strength development depends rather on ash sintering characteristics [12,13].
They are some widely used methods of assessing the slagging and fouling hazard. The ash fusion test (AFT) is widely used. This test determines temperatures at which change of samples’ shape is observed—deformation temperature (DT), spherical/softening temperature (ST), hemispherical temperature (HT), and fluid temperature (FT), which is a part of mineral matter transformation processes [3,5,14,15,16]. The other widely used method is based on the statistical observations of the relationship between the amount of basic and acid oxides and the tendency to slagging and fouling [17,18,19,20]. In addition to these two methods, there are others based on the observation of the change of physical properties of the ash. To detect the shrinkage behavior of the ash sample during the sintering process, the Thermomechanical Analysis (TMA) method can be implemented. That is originally applied in metallurgy [10]. The other interesting methods are thermal conductivity analysis [21], compressing strength analysis [22,23,24], electrical resistivity measurements [23], thermogravimetric analysis (TGA) [18,25], thermodynamic FactSage analysis [18], optical heating stage microscopy (OSHM) [26], pressure drop test [9,10,27,28], and other techniques presented in detail [29].
These methods are constantly applied to different types of solid fuels in order to better understand the process of mineral matter transformation of solid fuels and to develop a reliable and objective method for the assessment of operational hazards.
The interesting results of the ash deposits on tube strength in the convection section of pulverized coal-fired boilers were presented [22]. Based on the tested compressive strengths of sintered ash at three temperatures (750 °C, 850 °C, and 950 °C), it was found that the compressive strength was higher for higher temperatures and lower for larger ash particles. That was explained by the Frenkel sintering mechanism and the chemical reactions of the formation of calcium aluminosilicates [22].
Our article focuses on the study of the nonstandard mechanical method based on the measurement of the fracture stress of sintered ash samples in comparison with the results of the pressure drop test, oxide indices, and the standard AFT test. The aim of our study is to test the proposed mechanical method of the relationship between the fracture stress and the temperature of sintered samples for two types of solid fuels (coal and biomass). Two types of coal (bituminous and lignite) and three types of biomass (with relatively high Na and Ca content) were used as the experimental material. Due to the fact that the content of sodium and calcium determines the early stage of the ash sintering process [23], this choice will allow us to test the proposed nonstandard mechanical method—sensitive to the initial stage of the ash sintering process.
The proposed mechanical test has a large usage potential as an objective method for assessing the slagging and fouling hazards for coal ash and biomass. Interestingly, rapid changes in the breaking stress during the ash sintering process were observed in the same temperature range as the rapid changes in the pressure drop test. That observation shows that the breaking stress is very sensitive at the beginning stage of the ash sintering process. In turn, the study of the initial stage of the ash sintering process is very important in identifying the mechanisms of transformation of the mineral substance of solid fuels during combustion under different conditions [22,30].

The study was carried out on three selected types of crops (rye, barley, and wheat straw) and, as a reference, on two types of coals from Polish mines (lignite and bituminous coal). For all the tested materials, the mechanical test and pressure drop test were conducted to determine their technological suitability, i.e., technical and elemental analysis. Each tested biomass and coal sample was analyzed in terms of moisture content, ash content and volatile matter, the content of solid combustible parts, the content of elements such as C, H, O, S, N, and additionally, the heating value was determined.
The technical analysis was carried out in accordance with Polish Standards for solid fuels, i.e., determination of moisture content by the gravimetric method [31], ash content by the gravimetric method [32], the heat of combustion and calculation of calorific value by methods of calorimetry [33], and volatile matter content by the gravimetric method [34]. The results refer to the analytical state, i.e., the state of fuel with moisture and ash content like the sample brought to the level of equilibrium with the surrounding atmosphere. Fixed carbon (FC) is the solid combustible flammable residue that remains in fuel after moisture, volatile matter, and ash are expelled. FC content divided by the content of volatile matter is called the fuel ratio (FR). According to their fuel ratios, coals have been classified as anthracite with FR of at least 10; semi–anthracite with FR of 6 to 10; semi–bituminous with FR of 3 to 6; bituminous with FR of 3; and as alternative fuels with FR of 1 or less. The composition of the ashes was determined by the method of a Thermo iCAP 6500 Duo ICP plasma spectrometer using ASCRM–010 as a reference substance.
The ash samples with 200 μm fraction were tested, i.e., fraction sizes with polydispersed dust consistencies that agree with generally applied principles used for hard and brown coals, according to the norm [35].
Fuels of which ash samples were prepared were dried, grounded, and fractionated to a grain size of less than 200 µm. Subsequently, all of the tested fuels were initially degassed in a vertical oven (approx. 5 h time). Degassed samples were then sintered at 500 °C to achieve complete combustion of combustible components remaining in fuels after degassing (approx. 20–30 h). The temperature of fuel sintering (500 °C) was selected in the way that the melting point of mineral matter in the ashes was avoided. Therefore, these prepared ash samples were fractionated to grains below 100 µm. In the next step, the cylindrical samples from this form of ash are prepared.
In the strength method for forming the cylindrical samples, a special matrix was used. The specific quantity of tested ash was put into the special matrix (1 g) without any addition of binders. That sample was then compressed at constant pressure (1 Mpa). Formation of the samples occurs as a result of ash compaction. Dimensions of the samples were 8–8.5 mm in diameter and 10–12 mm in height. These obtained ash samples were then isochronally sintered for four hours in different temperatures ranging from 500 °C to 1200 °C. After being isochronally sintered, each sample was then mechanically tested in the following way: each sample was put under devastating stress using UCT—5882 device according to Figure 1.
The sample preparation for the pressure test method is similar to the mechanical one. The only difference is that the cylindrical shape of the samples is not formed in the matrix but directly in the measuring tube. This tube has special steel pins (upper and lower ones) fitted loosely in the tube. The lower pin serves as a base when forming cylindrical samples followed by the pressure on the sample of the upper pin using the hydraulic press under the same pressure as in the strength method (1.0 MPa). Samples obtained in the described process have a diameter of 10 mm and an approximate height of 1.5 mm.
Determination of the fouling temperature according to the pressure method is based on measuring the gradient of the pressure of compressed air flowing through a heated ash sample. The pressure drop system (Figure 2) includes (1) measuring tube, (2) ash sample, (3) electric furnace, (4) autotransformer with a temperature controller, (5) radiator, (6) thermocouple (6), (7) electronic pressure gauge, (8) electronic temperature gauge, (9) hoses with compressed air, (10) fittings, (11) recording system, and (12) rotameter.
Each mechanical and pressure measurement was repeated on five samples made of the same ash. The results presented in Figure 3, Figure 4 and Figure 5 are the arithmetic mean and the uncertainty is the mean standard deviation. 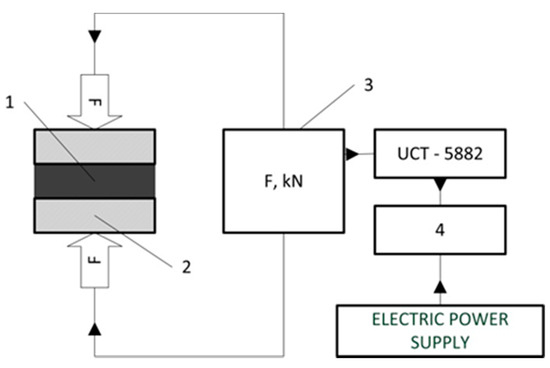 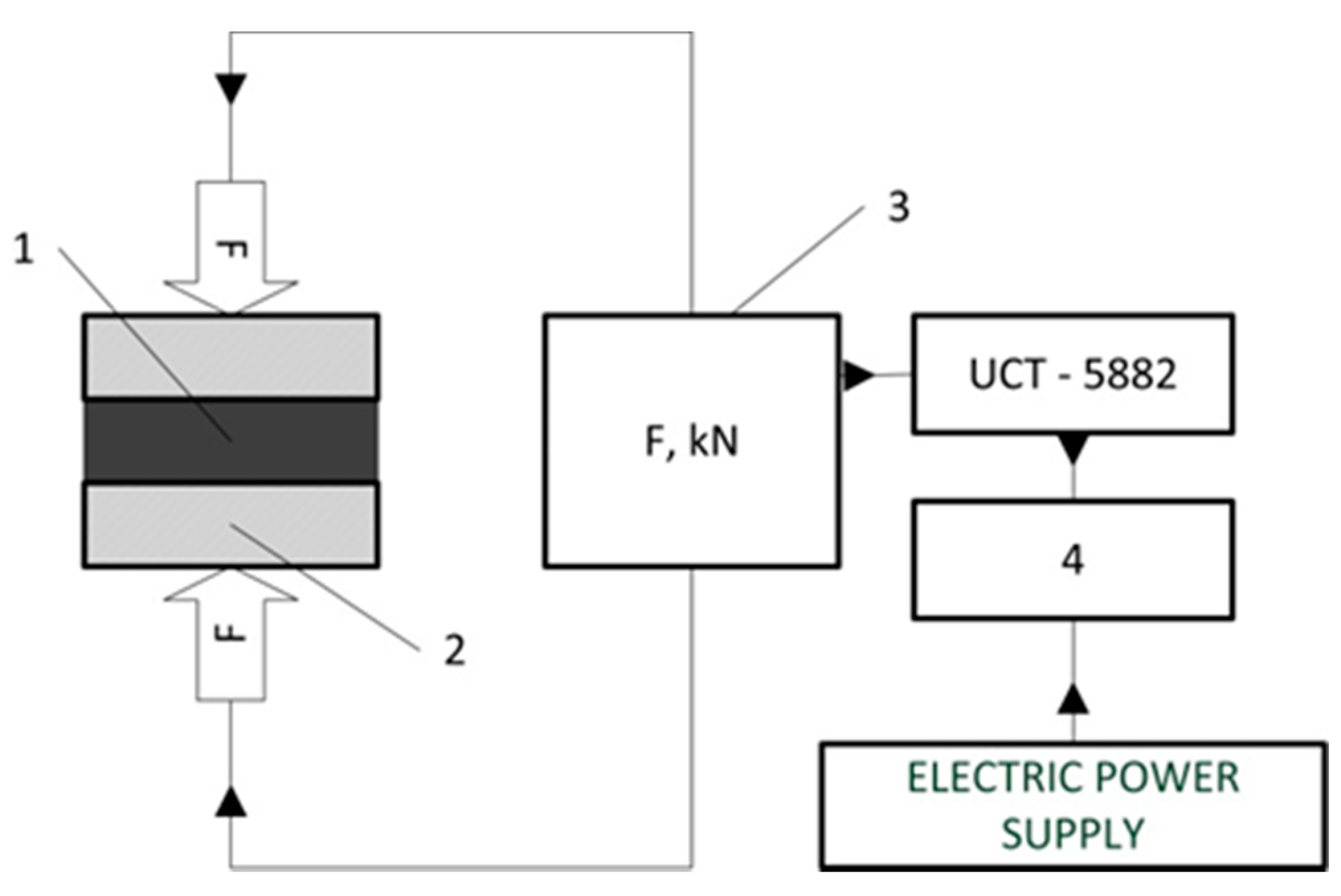