Improving the Anaerobic Digestion of Wine-Industry Liquid Wastes: Treatment by Electro-Oxidation and Use of Biochar as an Additive

This study explored the effect of eight antimicrobials on the efficiency of biogas production in the anaerobic digestion (AD) process of cattle manure. The microbiome involved in AD, presence and number of genes mcrA, MSC and MST specific for Archaea, and antibiotic resistance genes (ARGs) concentration in digestate (D) were examined. Supplementation of antibiotics to substrate significantly lowered biogas production. Amoxicillin caused a 75% decrease in CH4 production in comparison with the control samples. Enrofloxacin, tetracycline, oxytetracycline, and chlortetracycline reduced the amount of biogas produced by 36, 39, 45 and 53%, respectively. High-throughput sequencing of 16S rRNA results revealed that bacteria dominated the Archaea microorganisms in all samples. Moreover, antibiotics led to a decrease in the abundance of the genes mcrA, MSC, MST, and induced an increase in the number of tetracyclines resistance genes. Antibiotics decreased the efficiency of the AD process and lowered the quantity of CH4 obtained, while stimulating an increase in the number of ARGs in D. This work reveals how antimicrobials affect the cattle manure AD process and changes in microbial biodiversity, number of functional genes and ARGs in the digestate due to drugs exposure. It also, provides useful, practical information about the AD process. View Full-Text
Keywords: mesophilic anaerobic digestion; biogas production; microbiome biodiversity; antibiotic resistance genes; Illumina MiSeq Sequencing mesophilic anaerobic digestion; biogas production; microbiome biodiversity; antibiotic resistance genes; Illumina MiSeq Sequencing
►▼ Show Figures 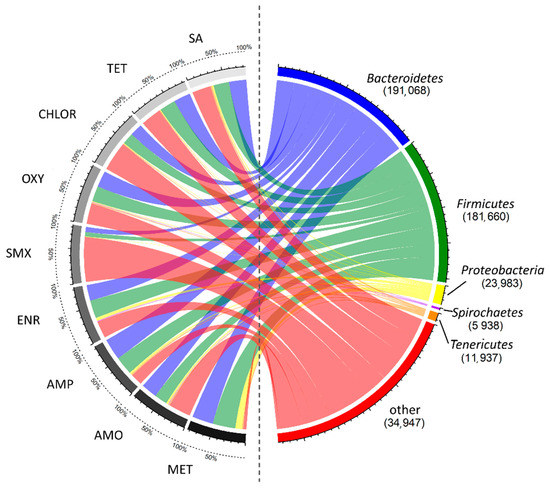 Ewa Korzeniewska
The research conducted by Ewa Korzeniewska focuses on the fate and risk of pollutants such as antibiotic resistant microorganisms and their genes responsible for antibiotic resistance in the environment. Moreover, she participates in research on intensification of production of high-energy biogas from organic waste using microorganisms. She is an Associate Editor of the Science of the Total Environment journal since 2018 and member of Editorial Board of International Journal of Environmental Research and Public Health since 2020. She is an author of approximately 100 full-length research papers, of which 58 are issued in Scopus, H index of 18, > 1040 citations.
Zoom | Orient | As Lines | As Sticks | As Cartoon | As Surface | Previous Scene | Next Scene
We use cookies on our website to ensure you get the best experience. Read more about our cookies here.
Accept
We have just recently launched a new version of our website. Help us to further improve by taking part in this short 5 minute survey here. here.
Never show this again