Organic-rich rocks of the Marcellus subgroup in the study area consist of a diverse suite of mudstone lithofacies that were deposited in distinct facies belts. Lithofacies in the succession range in composition from argillaceous to siliceous, calcareous, and carbonaceous mudstone. Heterogeneities in the succession occurs in the form of varying mineralogical composition, slightly bioturbated to highly bioturbated chaotic matrix, organic-rich and organic-lean laminae, scattered fossil shells in the matrix, and fossils acting as lamination planes. Lithofacies were deposited in three facies belts from the proximal to the distal zone of the depositional system. Bedded siliceous mudstone (BSM) facies occur in the proximal facies belt and consists of a high quartz content in addition to clay minerals and pyrite. In the medial part of the facies belt lies the laminated argillaceous mudstone (LAM), bedded calcareous mudstone (BCaM), and bedded carbonaceous mudstone (BCM). The size of detrital mineral grains in the lithofacies of the medial facies belt is larger than bedded argillaceous mudstone (BAM) of the distal facies belt, characterized by clay-rich matrix with occasional fossil shells and horizontally aligned fossils. Two types of horizontal traces and one type of fecal string characterize the proximal mud-stone facies, whereas only single horizontal trace fossil is found in the mudstones of the medial and distal facies belt. Parallel alignment of fossil shells and fossil lags in lithofacies indicate that bed-load transport was active periodically from the proximal source of the depositional system. Bioturbation has heavily affected all of the lithofacies and presence of mottled burrows as well as Devonian fauna indicate that oxic to dysoxic conditions prevailed during deposition. The deposition of this organic-rich mudstone succession through dynamic processes in an overall oxic to dysoxic environment is different from conventional anoxic depositional models interpreted for most of the organic rich black shales worldwide. Total organic content (TOC) varies from top to bottom in the succession and is highest in BCM facies. The brittleness index, calculated on the basis of mineralogy, allowed classification of the lithofacies into three distinct zones, i.e., a brittle zone, a less brittle zone, and a ductile zone with a general proximal to distal decrease in the brittle behavior due to a decrease in the size of the sediments. View Full-Text
Keywords: mineral composition; organic-rich lithofacies; ichnofossils; brittleness index; marine environment mineral composition; organic-rich lithofacies; ichnofossils; brittleness index; marine environment
►▼ Show Figures 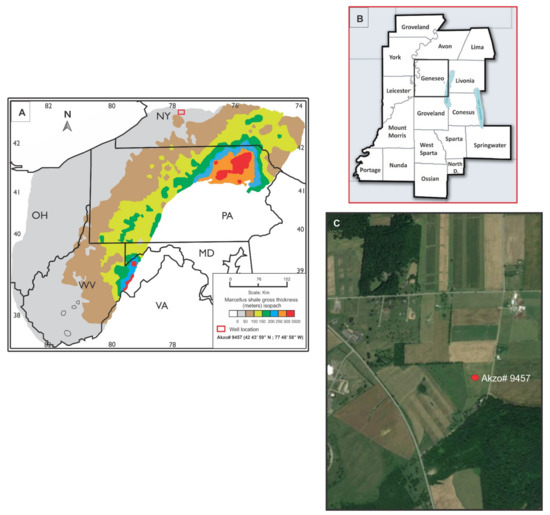