The wave energy resources in the Indian Ocean can be considered as a potential alternative to fossil fuels. However, the wave energy resources are subject to short-term fluctuations and long-term changes due to climate change. Hence, considering sustainable development goals, it is necessary to assess both short-term (intra-annual) variation and long-term change. For this purpose, the simulated wave characteristics were utilized, and the wave power and its variation and change were analyzed in the whole domain and nearshore areas. The short-term fluctuation was investigated in terms of monthly and seasonal variations and the future change was discussed based on absolute and relative changes. Both analyses show that the Southern Indian Ocean, despite experiencing extreme events and having higher wave energy potential, is more stable in terms of both short and long-term variation and change. The assessment of the total and exploitable storages of wave energy and their future change revealed the higher potential and higher stability of the nearshores of the Southern Indian Ocean. It can be concluded that based on various factors, the south of Sri Lanka, Horn of Africa, southeast Africa, south of Madagascar and Reunion and Mauritius islands are the most suitable areas for wave energy extraction.
Keywords: wave energy; wave power; monthly variability; climate stability; Indian Ocean wave energy; wave power; monthly variability; climate stability; Indian Ocean

The Indian Ocean, where a large number of the Earth’s population is living in surrounding lands, contains about 20% of the surface of the Earth’s ocean (Figure 1). The Indian Ocean experiences monsoon winds in the northern parts from October to January (northeast monsoon) and from June to September (southwest monsoon) [18]. In southern parts, the Indian Ocean also encounters the monsoons from January to March (northeast monsoon) and July to September (southwest monsoon) [19]. The wave climate assessment in the Indian Ocean shows that it is strongly affected by the swells from the Southern Ocean [20], while the Northern Indian Ocean is affected highly by the swells traveling from the Southern Indian Ocean towards the north especially in calm seasons [18].
Considering the noticeable Intra-annual variation in the wind and wave climate in the Indian Ocean, it is important to define the suitable potential areas for wave energy extraction based on their sustainability. However, as well as short-term variations, long-term changes should also be taken into account. For this purpose, Kamranzad and Mori [1] proposed a Climate Stability Index (CSI) that comprises Monthly Variability Index (MVI) in both historical and future projections and the relative change of the intended parameter in the future. Lower change in both short and long-term conveys higher stability of the parameter.
In this study, the long-term wave simulation using a high-resolution global climate model (MRI-AGCM3.2S) [21] provided by the Japan Meteorological Research Institute (MRI) was used to calculate the wave power values in the study area. The utilized model was SWAN (Simulating Waves Nearshore) [22] with the computational domain covering the area between 20° E–90° E in longitude and 71° S–30° N in latitude with the spatial resolution of 0.5°. The frequency domain consisted of the range from 0.03 to 1 Hz with 36 bins on a logarithmic scale, and the directional computational grid was divided into 36 bins of 10 degrees.
The simulations were done for a historical (1979–2003) and future (2075–2099) periods. For the future projections, RCP (Representative Concentration Pathway) 8.5 of the CMIP5 was used [23,24] as only this scenario was available with super-high-resolution. In fact, considering only one scenario is not enough to reduce the uncertainties in future projection. However, using a high-resolution dataset is vital in order to generate the high-resolution wave dataset assisting the reducing the uncertainties in numerical modeling. The model has been calibrated against the gridded Satellite multi-mission wave products from Aviso (http://www.aviso.oceanobs.com/) and the results have shown that the model is reliable to produce the wave characteristics in the Western Indian Ocean. A detailed discussion on the wave modeling and the validation procedure, qualitatively and quantitatively, can be found in [1].

The simplified deep water equation for calculating the wave power parameter was utilized. In order to reach that equation, the wave energy density is calculated by [25]: in which, ρ, g and Hs are density of water, gravitational acceleration and significant wave height, respectively. The wave power (P) is calculated as:
P = ECg = ECn
where Cg, C and n show the wave group speed, wave speed and the ratio of wave group speed to the wave speed, respectively. C is the ratio of wavelength (gT2/2π for deep water) to wave period (T) and n is considered approximately equal to 0.5 for deep water condition. Hence, the Equation (2) can be re-written as:
Considering that the real sea state includes a large number of regular waves, a variance spectral density function should be used to describe a mixture of different amplitudes, frequencies and directions. Therefore, the wave power per unit width of waves in deep water is calculated based on the energy period (Te) [26]: while Te is equal to the parameter Tm-10 in SWAN and is calculated from m−1/m0, where mn is the n-th moment of the energy density spectrum (E(f)) in which f is the frequency (SWAN scientific and technical documentation, 2019):
After calculating the wave power based on wave characteristics, the stability of the resources in the short-term can be evaluated using the Monthly Variability Index (MVI) which is calculated based on the ratio of the difference between the highest and lowest mean monthly wave power to the mean annual wave power.
In order to consider the long-term change, the Climate Stability Index (CSI) is used. CSI is calculated using Equation (6) [1]: in which, P is the mean annual wave power with H and F stand for historical and future periods, respectively. This index contains both short-term variation (MVI) and long-term change (Relative change: (PF − PH)/PH).

After validation of the model, it was performed for two 25-yearly periods (historical (1979–2003) and future (2075–2099) projections) and the time series of wave power was obtained based on significant wave height and wave period generated directly by SWAN in each output grid point. The spatio-temporal assessment of wave power in the study area was performed in order to firstly, evaluate the intra-annual (seasonal and mean annual) variation of the wave power and its relationship with natural fluctuations due to monsoon, etc., and secondly, to investigate the impact of climate change and the possible future change of the available resources.

In order to investigate the stability of the resources in the short-term, MVI was obtained for the nearshore wave power in the Western Indian Ocean. Figure 4 represents the MVI values for both historical and future projections. According to this figure, the spatial distribution of MVI is nearly similar for historical and future periods, except for the western parts of the Gulf of Oman near the Strait of Hormuz, which will increase, and west of India which will decrease slightly in the future. Figure 4 also shows that the monthly variability is lower in the Southern Indian Ocean compared to the Northern Indian Ocean.
In order to detect the areas with the highest values of wave power and the lowest variability in the monthly scale, the ratio of mean wave power to MVI was calculated and shown in Figure 5. According to this figure, the spatial distribution remains the same in the future indicating a higher potential and higher stability in the Southern Indian Ocean, especially southeast Africa, south of Madagascar and south of Reunion and Mauritius. In the Northern Indian Ocean, values in the south of Sri Lanka implement higher potential and stability.
As discussed before, for defining an area as a suitable location for wave energy extraction, as well as the amount of power, the stability of the resources is important to assess. The stability in terms of short-term variation (monthly) has been discussed in Figure 4 and Figure 5, whereas the long-term change due to climate change has been taken into account using CSI. Figure 6 shows the CSI value for wave power parameter in nearshore areas of the Western Indian Ocean implying the regions with the highest stability in terms of both short-term variation and long-term change. According to this figure, the northern coasts of the Gulf of Oman, Horn and Africa and parts of Sri Lanka experience the lowest variability and change in the Northern Indian Ocean. In the Southern Indian Ocean, the areas with the most stable supply of wave power are southeast Africa, south of Madagascar and east of Reunion and Mauritius islands.

In order to investigate the possibility of utilizing the wave energy converters, the total and exploitable storages of wave energy per unit area (Et and Ee, respectively) were also obtained. Et is calculated by multiplying mean wave power (Pmean) and the total hours all year round (t = 8760 h), while Ee is calculated based on Pmean and the theoretical exploitable time, i.e., the total hours corresponding to wave power higher than 2 kW/m [27]. Figure 7 indicates the exploitable storage of energy and its relative change in the future as well as the ratio of exploitable to total storages of energy in the historical period in addition to their change in the future.
According to Figure 7a, the spatial distribution of Ee illustrates the higher potential in certain areas in the Northern and Southern Indian Ocean. In the Northern Indian Ocean, the highest values exist in the Horn of Africa and Socotra Island, as well as part of Oman continental shelf and south and west of Sri Lanka. In the Southern Indian Ocean, the highest values of Ee can be found in southeast Africa, south and east of Madagascar and Reunion and Mauritius islands. Regarding the relative change (Figure 7b), the areas with the highest values will experience the lowest change in the future while the most intensive changes will occur in semi-enclosed seas (i.e., the Persian Gulf and the Red Sea). Moreover, there will be a reduction of about 20% in the western Indian continental shelf and Maldives. Figure 7c indicates that almost in all the nearshore areas of Southern Indian Ocean the ratio of Ee to Et has been 100%, which means the wave power exceeds 2 kW/m the whole year round. The areas with lower values of this ratio are semi-enclosed seas, east of India and northwest of Madagascar. In the future, this ratio remains the same in most areas in the Southern Indian Ocean, while most of the nearshore areas of the Northern Indian Ocean will experience the reduction of this ratio (Figure 7d).

The first author (B.K.) has been supported by the Hakubi Center for Advanced Research at Kyoto University and JSPS Grants-in-Aid for Scientific Research (KAKENHI) supported by the Ministry of Education, Culture, Sports, Science, and Technology-Japan (MEXT). The second author (G.L.) has received funding from the European Union’s Horizon 2020 research and innovation programme under the Marie Skłodowska-Curie grant agreement No 787344.

The authors are thankful to Disaster Prevention Research Institute, Kyoto University for sharing the wind dataset. 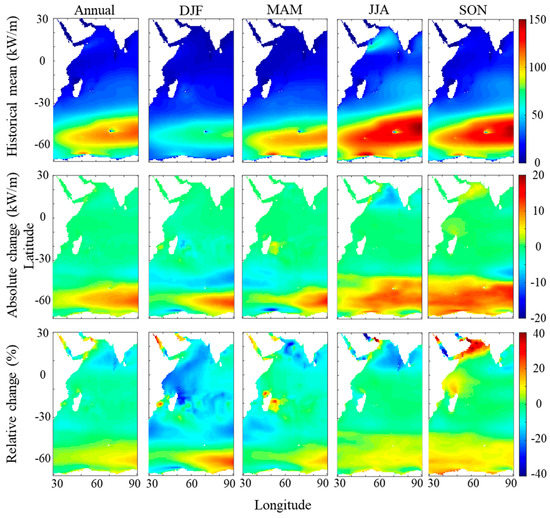 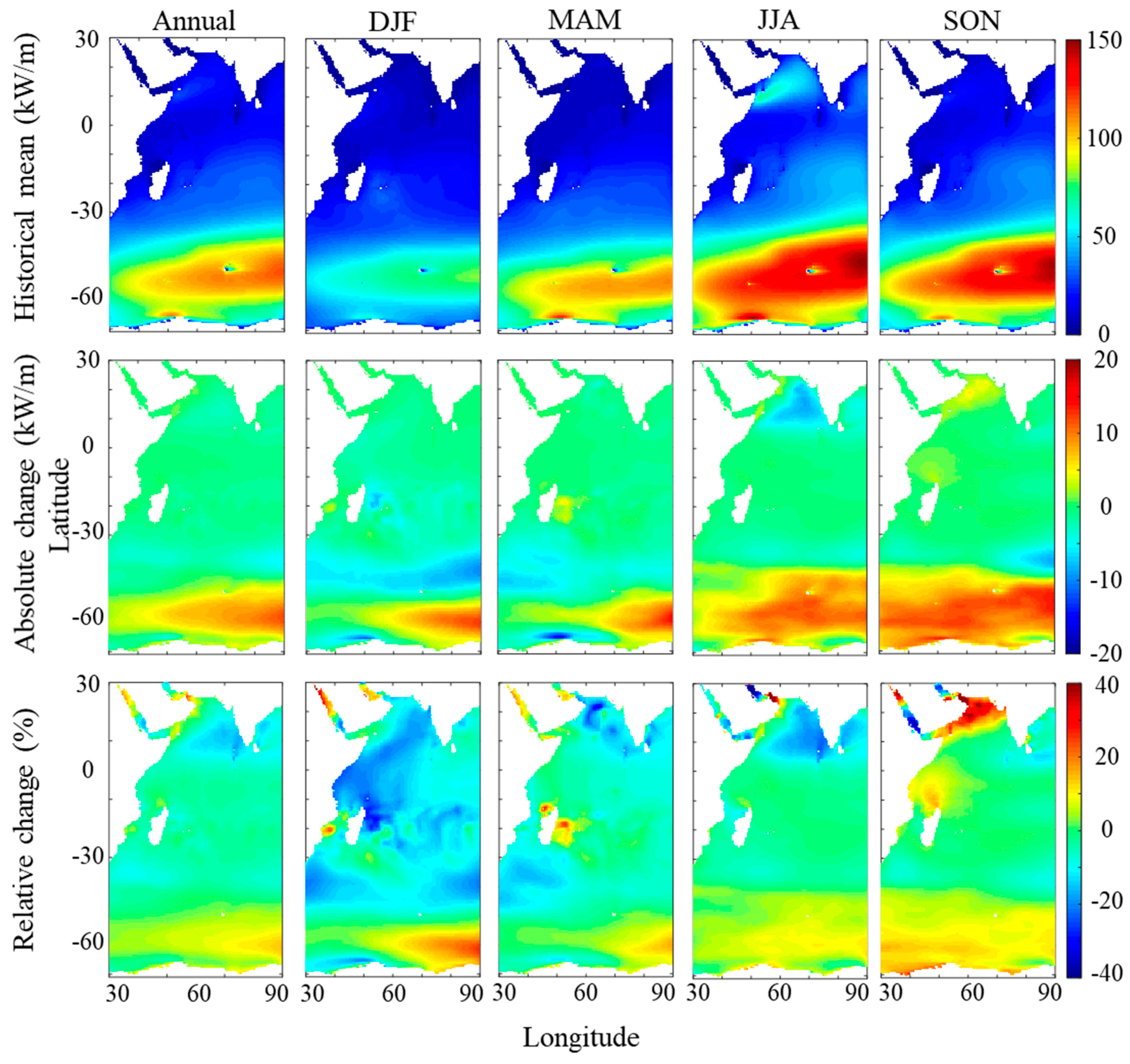 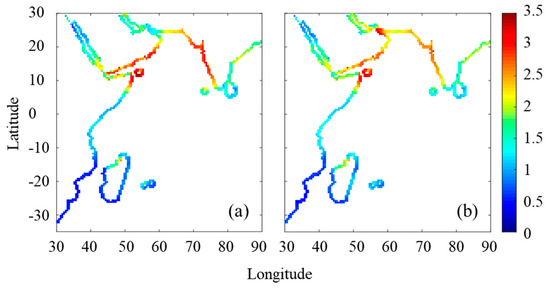 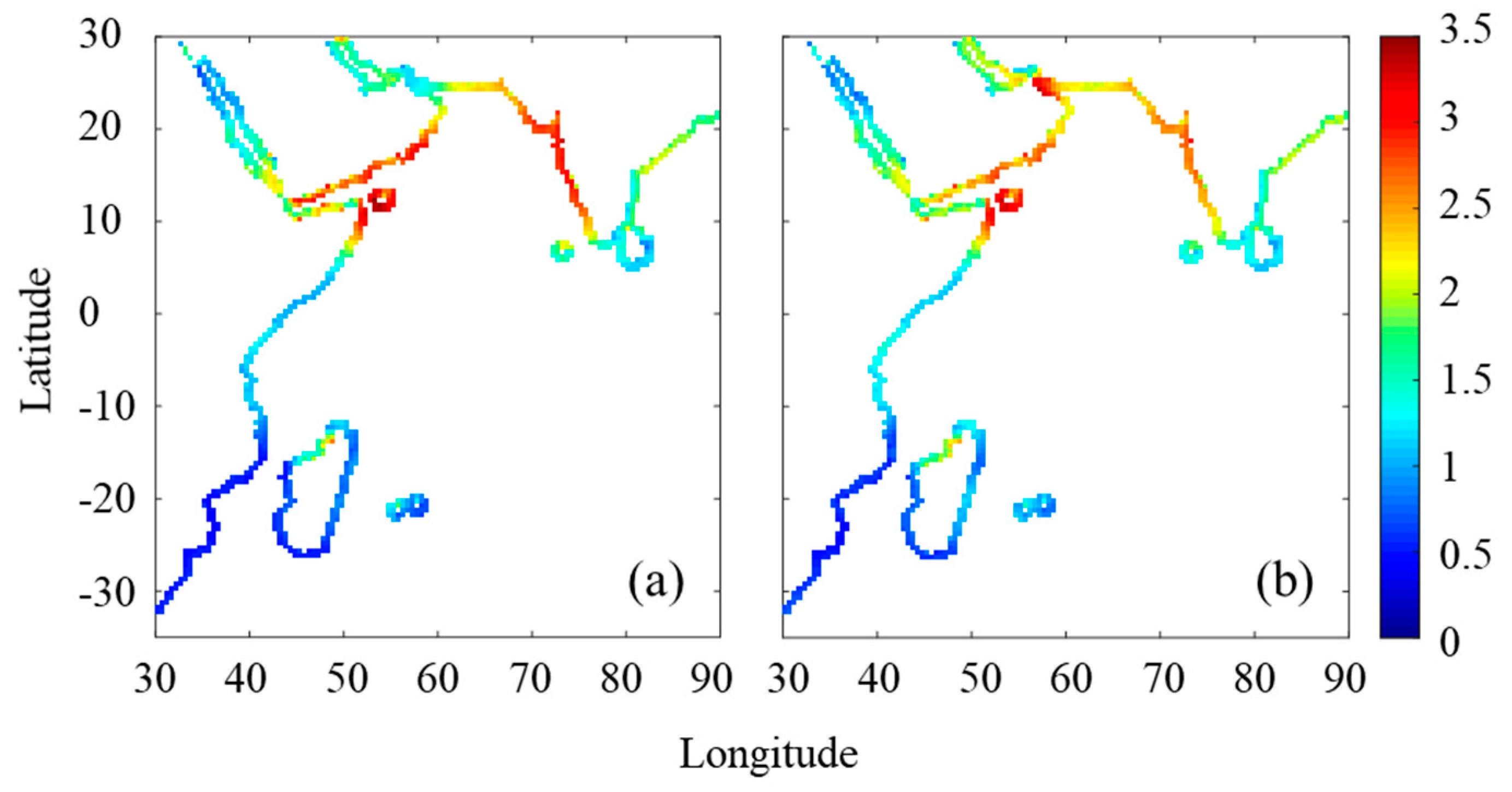 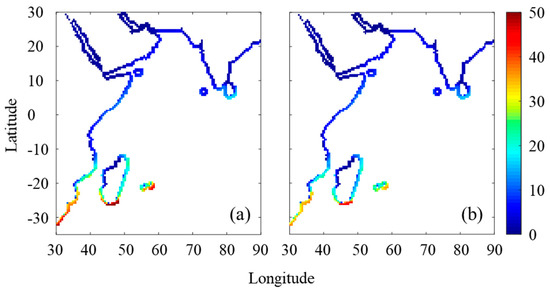 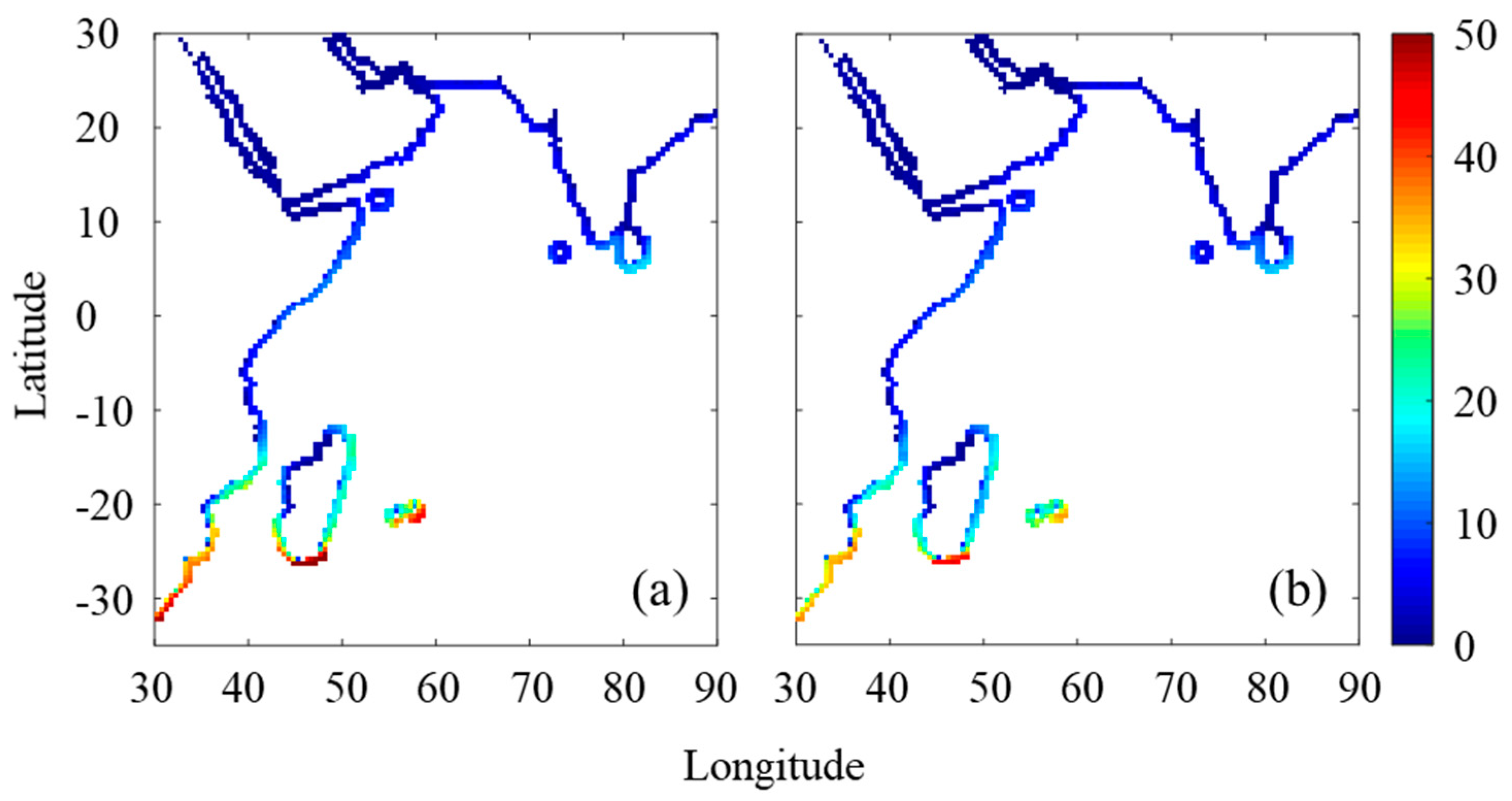 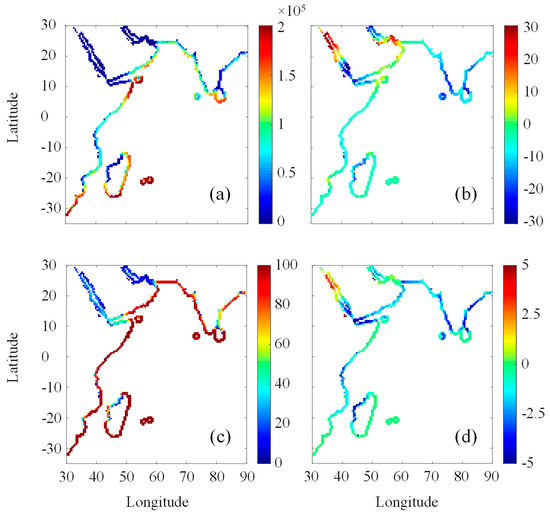