Prediction of the Energy Consumption Variation Trend in South Africa based on ARIMA, NGM and NGM-ARIMA Models
Next Article in Special Issue

The social cost, as one of the factors determining sustainability of socio-economic development, is strongly dependent upon a number of casualties and mortality in road accidents. The condition of car tires appears to be one of the important factors determining the occurrence of accidents. The vast majority of vehicles are tested every year at vehicle inspection stations. One of the elements affecting the result of the technical condition test and basically the quality of vehicle braking is the technical condition of the tires. Their technical condition is a very important factor responsible for the quality of acceleration, braking, maintaining, or changing the direction of driving. As a consequence, it has a significant impact on road safety. The aim of the study is to examine the impact of tires on the results of tests performed at a vehicle inspection station. The study presents the results of bench measurements of the impact of selected features of tire condition of two vehicles during routine periodic inspections at a vehicle inspection station (VIS). The focus was on an attempt to assess the impact of inflation pressure, age, and tire tread wear on the braking process. The technical studies performed might be a source for legal steps assuring better management of road safety. It can also be expected that the tire choice and condition may affect fuel consumption, and therefore the amount of energy consumed by the road transport.
Keywords: periodic inspection; diagnostics; vehicle inspection station; road safety; automotive accidents periodic inspection; diagnostics; vehicle inspection station; road safety; automotive accidents

2.1. Tire Size Depending on the Vehicle Weight

The information concerning the technical parameters of tires was obtained from the catalogs of car manufacturers [68,69,70,71,72,73] and the catalogs of companies dealing in the production and trade of tires [74,75,76,77,78,79].
Figure 1 and Figure 2 summarize the information for the most popular models of passenger cars on the automotive market (from segment A to segment E) with the basic types of tires recommended by the manufacturers. The starting parameter is the permissible gross vehicle weight (PGW - Permissible Gross vehicle Weight). The values presented refer to models with the smallest engine offered on the market for a given vehicle and with basic equipment.
As can be seen from the diagrams, the width of the used tires increases significantly with the increase of the PGW of the vehicle. One of the reasons for this dependence is the necessity to prevent unit pressure on the tire from being exceeded. There is also a clear tendency to lower the tire profile with the increase of the vehicle’s PGW.
It should be emphasized that tire substitutes are available on the market. They are used to change some driving parameters, e.g., braking distance. Tires with a smaller diameter are usually much cheaper. The size of the replacements results from the comparison of the outer diameters of the reference tire and the one suggested as a replacement. If the difference is between +1.5% and −2%, the tire can be used as a replacement for the original tire [80].

2.2. Tire Size Depending on the Date of Manufacture of the Vehicle

Because manufacturers offer different sizes of engines and different equipment for a given vehicle model, the average width and average tire profile for a given car model were calculated. The dependence of the tire width and its profile are represented respectively in Figure 3 and Figure 4. The newer the cars, the wider and lower the profile. As it results from literature studies, the reduction of the tire profile [index H = height/width] allows the increase of the contact surface of the tread with the road and, consequently, a better adhesion of the vehicle is observed, especially on dry surfaces.
The subject literature on the impact of tires on road safety shows how much weight is attached to the tires of a vehicle. This results in the multiplicity and detail of regulations set for manufacturers regarding the approval of tires and for motorists in the field of proper tire use.

2.3. Analysis of the Influence of Tires on the Braking Process During Control Ests on the VIS

3.1. Measurements of the Weight of the Front Axle Wheels–0 Series

The “Ryme” diagnostic line, in the part designed for determining the wheel pressures exerted on the road, which afterwards are used to determine the braking efficiency, gives the total mass resulting from the pressure of both wheels on one axle as the result of the measurement. In order to eliminate possible differences in measurements of braking forces, resulting from unequal calibration of both scales, an attempt was made to weigh the wheels of the front axle, left and right individually. These measurements are named in the description of the measuring cards as the series “0”.
Measurements of the front wheel axle mass (the so-called “0” series) were performed by approaching the diagnostic line with one wheel (left or right), in two directions: consistent with the direction of motion of the diagnostic line and in the opposite direction. The measurements showed a slight mass difference in favor of the left wheel. A possible cause might be the driver’s own weight. In addition, the left scale indicates smaller masses of the same wheel as the right scale, which indicates small differences in scales calibration (Table 1).

3.2. Interval Measurements of Braking Forces—Series I

3.3. Measurements of Braking Forces Depending on the Pressure on the Brake Pedal—Series II

In the second series of measurements, an attempt was made to determine the dependence of the braking force obtained on the wheels from the pressure on the brake pedal. Before the measurements, the tire pressure was adjusted to 0.21 MPa (according to the manufacturer’s recommendations). In this series, 15 measurements were also made, five for each pedal force: 100 N, 110 N, and 120 N. A 4-min time interval between measurements was used. The values of obtained forces on wheels are shown in Table 3.
Despite the noticeable dispersion of the results, it can be concluded that the braking force on the wheels increases in proportion to the increase in force applied to the brake pedal. This trend is the same for both wheels of the front axle.

In the next part of the research, the braking forces on the wheels of the front axle of vehicles were analyzed, in two series each (with and without a payload). Measurements were made at varying inflation pressure values of tires: From 0.15 MPa to 0.31 MPa. In both vehicles, on the left and right sides, tires with very different wear were used. The vehicles were loaded with steel weights, spread evenly on the floor of the vehicle, imitating the load of passengers. The mass of the loads was measured by subtracting the weight of unloaded vehicles from the total weight of the loaded vehicles. Due to the fact that the rollers stopped at different values of the pressure on the brake pedal, the arithmetic mean of the force from a given series of measurements was used to create diagrams of the dependence of braking force in the function of the tire inflation pressure. The measured braking forces were calculated as ratios of measured pedal force to the average force of the whole series. This allowed to overcome the dispersion of the measurement due to the rollers stopping at different pressures on the brake pedal.
Table 4, Table 5, Table 6 and Table 7 summarize the results of measurements of braking forces in the front axle wheels for both vehicles at different payloads. Based on the measurement results obtained, diagrams of braking forces as a function of tire inflation pressure were drawn (Figure 9, Figure 10, Figure 11 and Figure 12).

The basic assumption of this study was to assess the impact of the technical condition of tires on road safety.
After approximately 140 measurements of braking forces of the front axle wheels on a roller station of two similar vehicles with different tire tread wear, different inflation pressure, and different payloads, the following conclusions can be drawn:
After carrying out the above tests, it can be concluded that with the use of a roller station, no decisive dependency can be seen between the tread wear and tire inflation pressure and road traffic safety. A real assessment could be made during road tests in real conditions in different driving conditions (torsion, braking), at different vehicle speed ranges, and in different atmospheric conditions.
It is also possible to draw a general conclusion that a roller station at a vehicle inspection station is more useful for checking the efficiency of the entire braking system, rather than for checking the efficiency or quality of the tires. It should therefore be stated that the organoleptic inspection of tires is a very important element of vehicle testing at vehicle inspection stations in the aspect of road traffic safety.
The above conclusions should be taken into account in formulation of legal requirements for cars testing, especially cars with substantial mileage.
Future research: The studies performed on the regular inspection line do not permit us to evaluate effects of tire wear on all aspects of car behavior on the road. Consequently, additional research is needed in the direction of introducing modifications into vehicle inspection unit, as well as looking for completely different methods of car performance evaluation.
Also, data obtained from standard car inspection unit are not sufficient to detect the effect of tire condition on the fuel consumption. Studies in this direction will be continued.

The authors wish to express gratitude to Lublin University of Technology for financial support given to the present publication (Arkadiusz Gola). The research was carried out under financial support obtained from the research subsidy of the Faculty of Engineering Management (WIZ) of Bialystok University of Technology. From the grant No. WZ/WIZ/4/2019 (Olga Orynycz, Andrzej Wasiak). 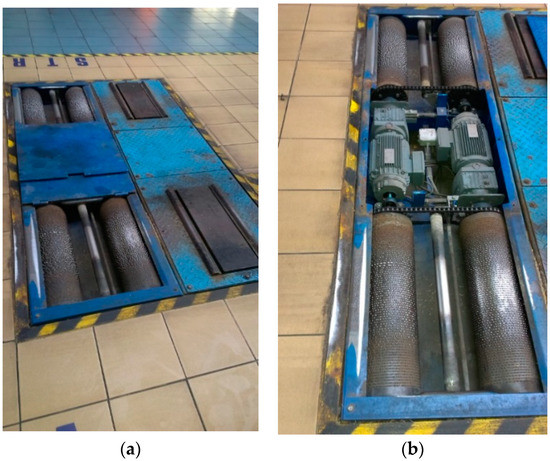 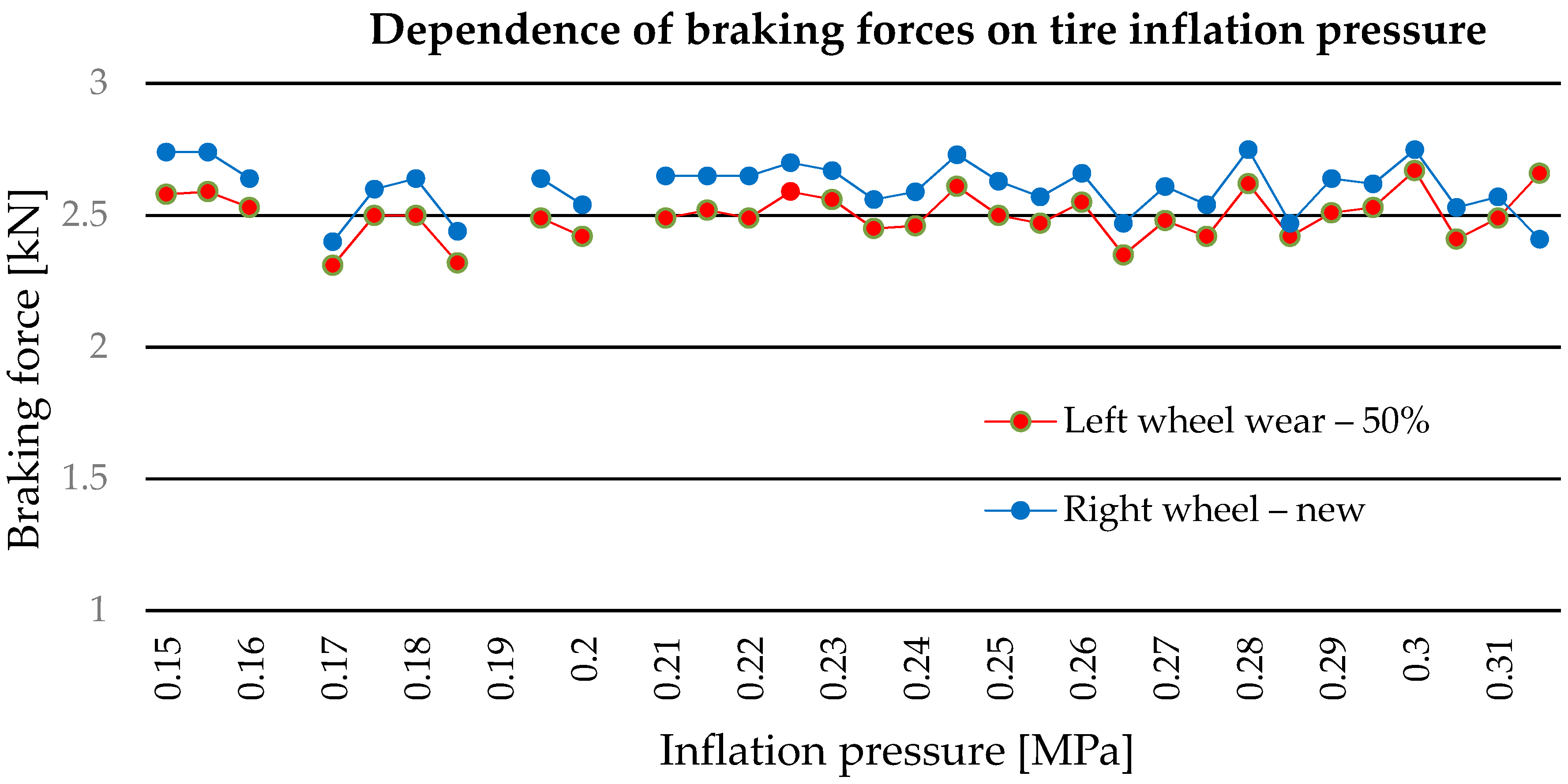