A range extender (RE) is a device used in electric vehicles (EVs) to generate electricity on-board, enabling them to significantly reduce the number of required batteries and/or extend the vehicle driving range to allow occasional long trips. In the present work, an efficiency-oriented RE based on a small motorcycle engine modified to the efficient over-expanded cycle, was analyzed, tested and simulated in a driving cycle. The RE was developed to have two points of operation, ECO: 3000 rpm, very high efficiency with only 15 kW; and BOOST: 7000 rpm with 35 kW. While the ECO strategy was a straightforward development for the over-expansion concept (less trapped air and a much higher compression ratio) the BOOST strategy was more complicated to implement and involved the need for throttle operation. Initially the concepts were evaluated in an in-house model and AVL Boost® (AVL List Gmbh, Graz, Austria), and proved feasible. Then, a BMW K75 engine was altered and tested on a brake dynamometer. The running engine proved the initial concept, by improving the efficiency for the ECO condition in almost 40% in relation to the stock engine and getting well over the required BOOST power, getting to 35 kW, while keeping an efficiency similar to the stock engine at the wide open throttle (WOT). In order to protect the engine during BOOST, the mixture was enriched, while at ECO the mixture was leaned to further improve efficiency. The fixed operation configuration allows the reduction, not only of complexity and cost of the RE, but also the set point optimization for the engine and generator. When integrated as a RE into a typical European light duty vehicle, it provided a breakthrough consumption reduction relatively to existing plug-in hybrid electric vehicles (PHEVs) in the market in the charge sustaining mode. The very high efficiency of the power generation seems to compensate for the loss of efficiency due to the excess electricity production, which must be stored in the battery. The results indicate that indeed it is possible to have an efficient solution, in-line with the electric mobility sustainability paradigm, which can solve most of the shortcomings of current EVs, notably those associated with batteries (range, cost and charging time) in a sustainable way. View Full-Text
Keywords: range extended electric vehicle; efficiency-oriented range extender; high efficiency engine; overexpansion; series hybrid; plug-in hybrid electric vehicle range extended electric vehicle; efficiency-oriented range extender; high efficiency engine; overexpansion; series hybrid; plug-in hybrid electric vehicle
►▼ Show Figures 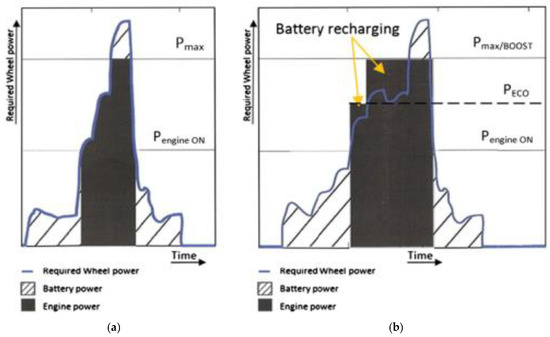