In recent years, multiphase induction machines (IMs) have been considered to be such a viable alternative in comparison to three-phase machines due to their fault tolerance capabilities with no extra hardware, lower torque ripple and better power splitter per phase which result very attractive to the research community for various industrial applications where a high-performance control strategy, as well as, reliability are required [1]. Presently, some applications of multiphase IMs that are being investigated include wind energy generation system [2], hybrid electric vehicles (EV) [3] and ship propulsion. In the applications mentioned above, multiphase IMs can be used under different conditions, such as healthy and post-fault operations [4,5]. From the point of view of control, the most common control strategy to regulate multiphase IMs is the field-oriented control (FOC), which is constituted by an inner current control loop, to obtain the references voltages, and an outer speed control loop for speed regulation [6]. However, several new control approaches have been carried out for the inner current control loop in multiphase IMs, some of them are: sliding mode control [7], resonant control [8] and model predictive control (MPC) [9]. Although there are other controllers such as the well-known proportional-integral (PI) controllers [10], the preferred choice is the MPC due to the fact that it shows a good transient behavior and facilitates the inclusion of nonlinearities in the system as described in [11,12], and in [13] where a comparative study between MPC and PI-PWM control has been addressed. In this context, the MPC strategy produces the reference voltage through the instantaneous discrete states of the power converter according to the minimization of a predefined cost function. However, the classic MPC strategy presents some limitations regarding to the application of only one vector in the whole sampling period. This results in current ripples as well as large voltages at low sampling frequency. Besides, the variable switching frequency develops a spread spectrum, decreasing the performance of the system in terms of useful power [14].
To overcome this subject, a predictive-fixed switching current control strategy, named (PFSCCS) from now on, applied to a two-level six-phase voltage source inverter (VSI) is presented in this paper. The strategy is based on a modulation concept employed with the MPC scheme, which has been studied for different power converters such as the mentioned two-level six-phase VSI described in [15,16] and also other topologies presented in [17,18]. In the proposed current strategy, three vectors have been considered at every sampling period, composed by two active vectors (taking only into account the largest vectors) and null vector, where their corresponding duty cycles are achieved according to the switching states and a switching pattern has also been used before being applied to VSI in order to generate a fixed switching frequency. Whereas, for the speed control loop, a PI controller has been developed by a technique shown in [19].
The main focus of this work is the implementation of the PFSCCS so as to reduce the (x-y) currents compared to the classic MPC strategy using a six-phase IM supplied through a two-level six-phase VSI. In that context, both simulation and experimental validations have been included to demonstrate the capability of the proposed technique. In addition, the effectiveness of the PFSCCS is tested under steady-state and transient requirements, respectively, incorporating the mean square error (MSE) and the total harmonic distortion (THD) analysis.
The paper is organized as follows: the model of the six-phase IM and VSI are presented in Section 2. In Section 3 are described the speed controller, classic MPC and the proposed current controller based on modulated model predictive control. Section 4 shows the performance of the proposed control through simulation and experimental results in steady-state and transient conditions. Finally, Section 5 summarizes the conclusion.

The six-phase IM, supplied by a two-level six-phase VSI with a DC-Link voltage source (), is taken into account in this work. The simplified topology is presented in Figure 1. The six-phase IM is a dependant of time system, for this reason it is possible to represent it through a group of equations in order to define a model of the real system.
In that sense, vector space decomposition (VSD) strategy [20] has been used to translate the actual six dimensional plane, formed through the six phases of the six-phase IM, into three two dimensional rectangular sub-spaces in the stationary reference frame, named as (-), (x-y) and (-) frame, by applying the amplitude invariant decoupling Clarke conversion matrix T [21]. The (-) frame contains the variables that provide the torque and flux regulation, unlike the (x-y) frame which is linked with the energy losses. The zero elements mapped in the (-) frame are not examined due to the adopted topology (isolated neutral points).
Moreover, the model of the VSI must be included in the system. Thus, due to the discrete nature of the VSI, it is necessary to define an amount of different switching states which represent every state of each VSI leg specified as , where is considered as binary number, i.e., 0 or 1. Therefore, the stator phase voltages can be projected into (-)-(x-y) frame by considering the vector and the voltage employing the VSD strategy. In Figure 2, the 64 control alternatives (48 active and one null vectors) are depicted in the (-)-(x-y) frame.
By considering the mentioned analysis, the six-phase IM can be performed by employing the state-space representation as follows: being the state vector constituted by stator-rotor currents of the six-phase IM, shown in Equation (3), is the input vector constituted by the stator voltages, presented in Equation (4). While and are matrices obtained by the electrical parameters of the six-phase IM. The process noise is defined as and represents the noise weight matrix.
Consequently, by taking into account the state-space representation in Equation (2) and the state vectors, it is feasible to establish the following equations: where the electrical variables of the six-phase IM are represented by , , , and , represents the rotor electrical speed and the coefficients () are defined as:
Besides, in order to produce the stator phase voltages, which are dependant of the voltage and the vector , an ideal six-phase VSI has been used [21] as it is defined in Equation (7).
In turn, the stator phase voltages can be mapped into (-)-(x-y) frames defined as follows: where Equation (9) is considered the output vector, denoted by , and is the measurement noise. Finally, the mechanical equations of the six-phase IM are specified as: where defines the inertia coefficient, is the friction coefficient, represents the generated torque, is the load torque, is the rotor mechanical speed, which is related to the rotor electrical speed as , and are the stator fluxes, and P is the number of pole pairs.

A complete diagram of the PFSCCS for the six-phase IM drive is shown in Figure 3, where the outer speed control and the proposed inner current control will be detailed in the following sections.

The MPC is related to the mathematical model of a given system, the six-phase IM in this case, commonly termed as predictive model, which consists of the prediction of the future action (at time k) of the system through measured variables, such as the rotor mechanical speed and the stator currents. Hence, for that purpose a forward Euler discretization strategy has been implemented.
being k the actual sample and the sampling period. Superscript p represents the predicted variables of the system.
According to the state-space representation (12), the stator currents and the rotor mechanical speed can be measured. Thus, the stator voltages are directly predicted through the switching states of the six-phase VSI. Nevertheless, the rotor currents are not easily measured. This issue can be faced through the estimation of the rotor currents by a reduced order estimator which determines the unmeasured fraction of the state vector. Then, in this work, the rotor currents are estimated by the proposed strategy in [22] which employs a reduced order estimator based on a Kalman Filter (KF). In that sense, uncorrelated process noises and a zero-mean Gaussian measurement have been considered. Finally, the the studied system equations are established as: where and represent the discretized matrices since (5). is related to the current value of and must be included at every sampling period. A completed explanation of the aforementioned reduced order KF is presented in [22,23].

The optimization action is carried out at every sampling period by the MPC strategy. The action is based on the evaluation of a defined cost function, shown in (15), for every feasible stator voltages in order to obtain the control purpose. Since the cost function can be expressed in various manners, in this work, the minimization of the current tracking error has been taken into account specified by the following equation: being the errors defined as follows: considering as the reference vector for the stator currents and as the predicted values based on the second-step forward state. At the same time, a tuning parameter is included in the cost function, described as , in order to provide an extra weight on (-) or (x-y) frames [22,23].

According to the space vector modulation (SVM) strategy, it is feasible to find the available vectors for the six-phase VSI in the (-) frame, this produces 64 sectors (48 different ones), which are conformed by two active vectors and a null vector as depicted in Figure 4. The proposed strategy realizes the prediction of the vectors (null vector and two active vectors) that compose every sectors and calculates the cost function independently (, and ) for each prediction at every sampling period. However, the proposed strategy only select the twelve largest vectors including the null vector in order to represent the optimal vector. This current control approach has been adopted in order to reduce the (x-y) currents [24,25].
The prediction is obtained by Equation (13), but differs in the calculation of the input vector ( [21]. The duty cycles (), considering the null vector and the two active vectors (, and ), respectively, are achieved through the following equations:
Hence, it is possible to acquire the relation for and the duty cycles for the specified vectors as:
Taking account these relations, the cost function is redefined, as shown in Equation (22), and calculated at each .
In this way, the two vectors that reduce are chosen and then applied to the VSI at the following sampling period. Once the optimal vectors are obtained, the two active vectors (-) and null vector (), their respective duty cycles to be applied and a switching pattern scheme, described in [21], are taken with the aim of producing a fixed switching frequency.

In this paper, a predictive current control technique with a fixed switching frequency applied to a six-phase IM has been proposed. This technique has been developed to reduce the stator currents in the (x-y) frame using the largest vectors of the (-) frame with a stage of modulation based on a determined switching pattern in order to produce a fixed switching frequency. The simulation and experimental results have shown the performance of the proposed technique, where the system has been tested under different conditions (steady and transient conditions) including different rotor mechanical speeds, sampling frequency and tuning parameters for (x-y) stator currents, respectively. In terms of (-) currents tracking, the presented technique has a better behavior at lower speed and a remarkable reduction of (x-y) stator currents compared to classic MPC. The obtained results have also demonstrated a good transient current behavior in terms of overshoot and settling time. In summary, the proposed current control technique is a good alternative both in low and high speeds for industrial applications.

The authors would like to thank members of the LSPyC, APET and LECPE for their significant comments on this work.

The following abbreviations have been employed in this work: 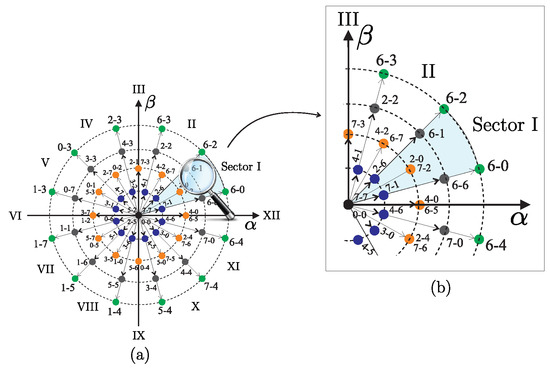