Acute myeloid leukemia (AML) is the most common type of hematological malignancy. Recently, an increasing number of reports have shown that many circular RNAs can act as effective targets for AML. However, the roles of circ_0059707 in AML remain largely unclear. In this study, we found that the expression levels of circ_0059707 were significantly decreased in AML patients with respect to normal controls (p < 0.001). Low expression levels of circ_0059707 were also associated with a poor prognosis. Furthermore, circ_0059707 overexpression inhibited cell growth and promoted apoptosis in leukemia cells, compared with control cells. Circ_0059707- and empty plasmid-transfected cells were injected subcutaneously into BALB/c nude mice. We found that the tumor volume was significantly lower in mice in the circ_0059707 group than in control mice (p < 0.01). Nuclear pyknosis, nuclear fragmentation, nuclear dissolution, and cell necrosis were observed in the circ_0059707 group by HE staining. CircInteractome analysis showed that 25 microRNAs (miRNAs), including miR-1287-5p, ©-miR-1825, a©hsa-miR-326, may be potential targets for circ_0059707. The expression of these miRNAs was analyzed in both the GEO GSE51908 and the GSE142700 databases. miR-1287-5p expression was lower in AML patients compared with controls in both the GSE51908 and the GSE142700 datasets. Moreover, we demonstrated that miR-1287-5p expression was down-regulated in AML patients and up-regulated in circ_0059707-overexpressing cells. Collectively, our research demonstrated that the down-regulation of circ_0059707 was highly evident in de novo AML patients. Our analysis also demonstrated that circ_0059707 inhibited cell growth and promoted apoptosis by up-regulating miR-1287-5p.
Keywords: circular RNA; acute myeloid leukemia; circ_0059707; prognosis circular RNA; acute myeloid leukemia; circ_0059707; prognosis

Acute myeloid leukemia (AML) is a form of malignant clonal disease of the hematopoietic system that originates in myeloid progenitor cells and is the most common type of acute leukemia [1,2]. Genetic changes, such as chromosomal abnormalities and gene mutations, play an important role in the development of AML [3,4,5]. Epigenetics changes are also known to be a pathological mechanism that plays an important role in the development of AML and include key genomic changes such as DNA methylation and non-coding RNA functions [6,7,8,9]. Although there are many therapeutic regimens for AML, the prognosis of patients affected by this disease is still unsatisfactory, and most patients will relapse and die after remission. Therefore, there is a clear and urgent need to identify new targets for the diagnosis, prediction, and treatment of AML, so to improve efficacy, monitoring, and treatment.
Epigenetic modifications associated with non-coding RNAs are known to be an important mechanism in the development of leukemia, and the discovery of this new form of RNA brings new hope to the treatment of many genetic conditions [7,10,11,12,13]. Circular RNA is a ubiquitous form of conservative non-coding RNA with characteristic stability [14]. Previous research reported that the knockdown of circMYBL2 inhibited the proliferation and promoted the differentiation of FLT3-ITD AML cells both in vivo and in vitro. The mechanism underlying these effects involves circMYBL2 increasing the binding of PTBP1 and FLT3 mRNA, improving the translation efficiency of the FLT3 kinase [15]. In a previous study, Wang et al. reported that circSPI1 acts as an oncogene by antagonizing SPI1 and by interacting with microRNAs in AML [16]. Other research showed that circRNF220 was associated with relapse, and the knockdown of circRNF220 inhibited cell proliferation and promoted apoptosis. This circular RNA may act as a sponge for miR-30a, thus affecting the levels of the miR-30a targets MYSM1 and IER2 [17].
circ_0059707 is a circular RNA formed by the cyclization of exon 2 in the process of ID1 cleavage. ID1 (inhibitor of DNA binding 1) is a negative regulator of HLH (helix–loop–helix) transcription factor that is widely expressed in the human body and acts as an oncogene to promote cell cycle progression, enhance proliferation and migration, and inhibit apoptosis [18,19,20,21]. Our group previously reported that ID1 was over-expressed in AML patients and that patients with high expression levels of ID1 had poor prognoses [22]. The overexpression of ID1 was also shown to promote the growth of leukemia cells, inhibit apoptosis, and increase resistance to decitabine. During splicing, ID1 forms two circular RNAs, circ_0059706 and circ_0059707, according to the circBase data base (http://www.circbase.org, 17 September 2022). In this study, we investigated the expression of circ_0059707 in AML patients, evaluated the clinical significance of circ_0059707 expression, and explored the role of circ_0059707 in the development of leukemia.

This study was approved by the Ethics Committee of the Affiliated People’s Hospital of Jiangsu University. A total of 117 participants, including 94 de novo AML patients and 23 controls, were enrolled in this study. All samples were obtained from the sample bank of our hospital, and all patients provided signed and informed consent. Bone marrow (BM) mononuclear cells were extracted from specimens of BM by gradient centrifugation (TBD Sciences, Tianjin, China). The diagnosis and classification of AML patients were based on French–American–British (FAB) and World Health Organization criteria [23,24]. Risk classification was based on European Leukemia Net guidelines [25].

Ten six-week-old specific pathogen-free (SPF) female BALB/c nude mice were purchased from Shanghai Slack Experimental Animal Co., Ltd. (license number: SCXK 2017-0005, Shanghai, China). All animal experiments were approved by the Experimental Animal Management and Use Committee of Jiangsu University. All mice were housed in SPF conditions, at room temperature (22 ± 2 °C) and humidity of 55 ± 5%. We injected 1 × 107 cells subcutaneously into the back of each mouse. The weight of each mouse and the volume of the tumors generated were recorded every three days. At the end of the experiment, the mice were sacrificed, peripheral blood was collected, and the tumors were excised. Tumor volume was then calculated using the following formula: Volume = 0.5 × length × width2. Red blood cell (RBC) count was performed by the Automatic Animal Blood Cell Analyzer (VH30, Huaren, China).

The Lymphocyte Separation Medium (TBD Sciences, Tianjin, China) was used to extract mononuclear cells from BM. Total RNA was isolated from 1 × 106 cells using a miScript kit (Qiagen, Dusseldorf, Germany) according to the manufacturer’s instructions and then reverse-transcribed into cDNA using 1 μg of RNA (Takara, Osaka, Japan). The tumor tissue was homogenized by an ultrasound homogenizer, adding TRIZOL (Invitrogen, CA, USA) and chloroform (Xiangde, Xiamen, China) in turn. The samples were centrifuged, treated with isopropanol (Xiangde, Xiamen, China), washed with ethanol and centrifuged. Total RNA was dissolved in RNase-free water. The concentration of RNA was determined by a spectrophotometer, and then RNA was reverse-transcribed into cDNA using 1 μg of RNA (Takara, Japan). The primers for circ_0059707 were 5′-CGTTTGGTGCTTCTCAGATTTC-3′ (forward) and 5′-CATGCCGCTTACCACCATCTAA-3′ (reverse). As a control, we used primers for ABL, whose sequences were 5′-TCCTCCAGCTGTTATCTGGAAGA-3′ (forward) and 5′-TCCAACGAGCGGCTTCAC-3′ (reverse). To detect the expression of miRNA, we proceeded as described above, except that a miScript Reverse Transcription Kit was used to reverse transcribed the RNA into cDNA (Qiagen, Dusseldorf, Germany). The forward primer for miR-1287-5p was 5′-GCGTGCTGGATCAGTGGTT-3′ (forward), and the reverse primer was a universal primer provided by the manufacturer of miScript kit. The primers used as controls were those for human-U6 whose sequences were 5′-GTGCTCCCTGCTTCGGCAGCACATATAC-3′ (forward) and 5′-AAAAATATGGAACGCTTCACGAATTTG-3′ (reverse).

Formalin-fixed subcutaneous tumor masses were embedded in paraffin blocks, cut, and placed on slides. The paraffin sections were dewaxed with xylene and hydrated using an ethanol gradient. Then, staining was carried out using an HE staining kit (Beyotime, Shanghai, China) in accordance with the manufacturer’s instructions. Tissue structures were observed under a light microscope (Nikon, Tokyo, Japan).

Public gene expression data and full clinical annotations were searched in the Gene-Expression Omnibus databases GSE51908 and GSE142700. GSE51908 contains 3 controls and 18 AML cases. GSE142700 contains 24 controls and 24 AML cases. One control in GSE142700 reported expression levels of all miRNA that were much higher than those found in other control cases; therefore, it was excluded. The StandardScaler function in the ‘Sklearn’ package was used for data standardization, and the ‘matplotlib’ package was applied to obtain a heatmap of gene expression levels via Python software (version 3.7.6).

SPSS 20.0 and GraphPad Prism 5 software were used for data analysis. The relative levels of circ_0059707 expression were calculated with the 2−ΔΔCT method. Categorical variables were analyzed by the Chi-squared test and/or Fisher’s exact tests. The diagnostic capability of circ_0059707 was analyzed using receiver operating characteristic (ROC) curves and area under the curve (AUC) analysis. Survival was analyzed by the Kaplan–Meier method. Univariate and multivariate data were analyzed by Cox regression. Differences in continuous variables between the two groups were compared by Student’s t-tests. Differences were considered statistically significant at p < 0.05 (two-tailed).

3.1. Relative Expression Levels of Circ_0059707 and Clinical Characteristics of AML

To determine the possible mechanism involved in the functionality of circ_0059707, we performed additional analyses. First, we analyzed the miRNAs that may bind to circ_0059707 by use of the circInteractome database (https://circinteractome.nia.nih.gov/index.html, accessed on 17 September 2022); this analysis predicted 25 miRNAs that may bind to circ_0059707, including miR-1287-5p, miR-330, miR-495. Then, the expression levels of these miRNAs in AML patients were analyzed using the GEO database (Datasets: GSE51908 and GSE142700). The analysis showed that the levels of miR-1287-5p were lower in AML patients than in controls; this was observed in both the GSE51908 and the GSE142700 datasets (Figure 4A,B). The binding site between circ_0059707 and miR-1287-5p is shown in Figure 4C. Finally, the expression levels of miR-1287-5p were found to be up-regulated in K562 cells that overexpressed circ_0059707 (Figure 4D).

J.M., X.W., Z.X. performed the experiments. P.X. and Y.J. collected the data, performed data analyses. J.L. provided the resources. J.Q. reviewed and edited the manuscript. All authors have read and agreed to the published version of the manuscript.

Written informed consent was obtained from the patient(s) to publish this paper. 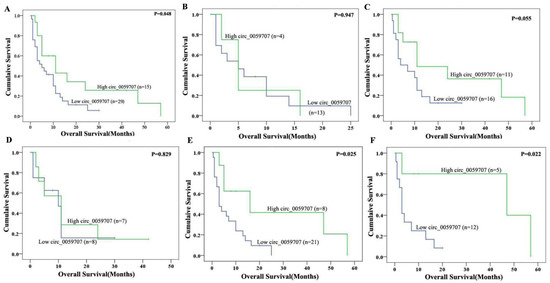 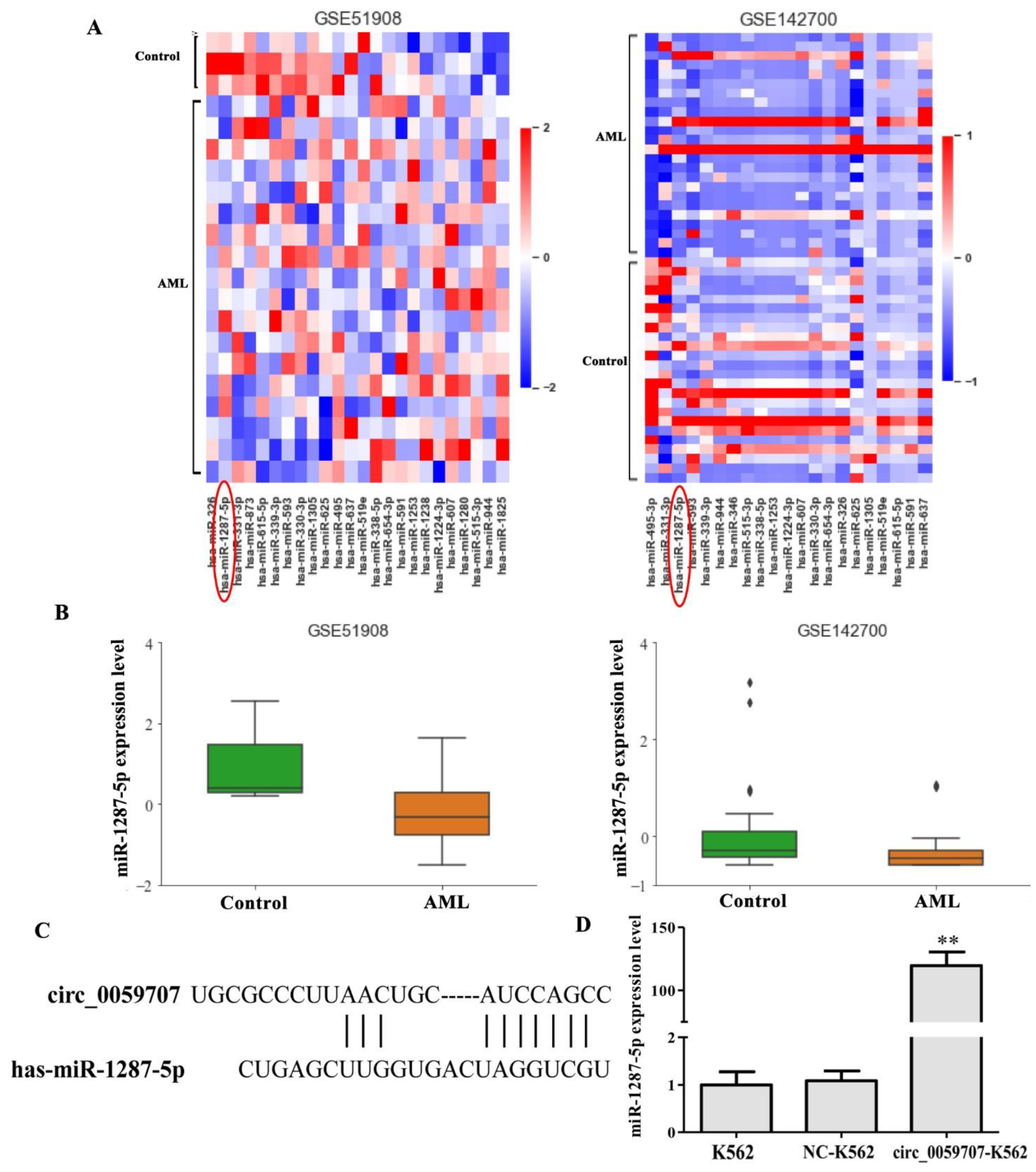