Dealing with the Vicissitudes and Abject Consequences of Head and Neck Cancer: A Vital Role for Psycho-Oncology
Previous Article in Journal

Purpose: Bladder cancer is the 13th most common cause of cancer death with the highest lifetime cost for treatment of all cancers. This scoping review clarifies the available evidence on the role of a novel therapeutic approach called immunogenic cell death (ICD) in urothelial cancer of the bladder. Methods: In accordance with the recommendations of the Joanna Briggs Institute, we searched MEDLINE (Ovid), EMBASE, CENTRAL databases, and supplemented with manual searches through the conferences, Google scholar, and clinicaltrials.gov for published studies up to April 2022. We included literature that studied molecular mechanisms of ICD and the role of certain danger-associated molecular patterns (DAMPs) in generating ICD, safety and efficacy of different ICD inducers, and their contributions in combination with other urothelial cancer treatments. Results: Oncolytic viruses, radiotherapy, certain chemo/chemo radiation therapy combinations, photodynamic therapy, and novel agents were studied as ICD-inducing treatment modalities in the included studies. ICD was observed in vitro (murine or human urothelial carcinoma) in ten studies, eight studies were performed on mouse models (orthotopic or subcutaneous), and five clinical trials assessed patient response to ICD inducing agents. The most common studied DAMPs were Calreticulin, HMGB1, ATP, and Heat Shock Proteins (HSP) 70 and 90, which were either expressed on the cancer cells or released. Conclusion: ICD inducers were able to generate lasting antitumor immune responses with memory formation in animal studies (vaccination effect). In clinical trials these agents generally had low side effects, except for one trial, and could be used alone or in combination with other cancer treatment strategies in urothelial cancer patients. View Full-Text
Keywords: bladder cancer; immunogenic cell death; immunotherapy; immune checkpoint inhibitors; scoping review bladder cancer; immunogenic cell death; immunotherapy; immune checkpoint inhibitors; scoping review
►▼ Show Figures 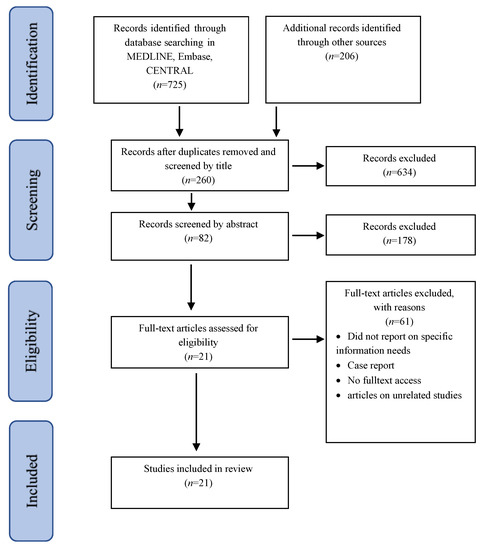