Wound Healing Metabolites from Peters’ Elephant-Nose Fish Oil: An In Vivo Investigation Supported by In Vitro and In Silico Studies
Previous Article in Special Issue

James B. McClintock
2 and

The common Antarctic red alga Plocamium sp. is rich in halogenated monoterpenes with known anticancer and antimicrobial properties and extracts of Plocamium sp. have strong ecological activity in deterring feeding by sympatric herbivores. Plocamium sp. collected near Anvers Island, Antarctica showed a high degree of secondary metabolite diversity between separate individuals. GC/MS results revealed 15 different combinations of metabolites (chemogroups) across individuals, which were apparent at 50% or greater Bray–Curtis similarity and also clearly distinguishable by eye when comparing chromatographic profiles of the secondary metabolomes. Sequencing of the mitochondrial cox1 gene revealed six distinct haplotypes, of which the most common two had been previously reported (now referred to as Haplotypes 1 and 2). With the exception of one individual, three of the chemogroups were only produced by individuals in Haplotype 1. All the other 12 chemogroups were produced by individuals in Haplotype 2, with five of these chemogroups also present in one of the four new, less common haplotypes that only differed from Haplotype 2 by one base pair. The functional relevance of this metabolomic and genetic diversity is unknown, but they could have important ecological and evolutionary ramifications, thus potentially providing a foundation for differential selection. View Full-Text
Keywords: halogenated monoterpenes; metabolite diversity; haplotype diversity; Plocamium; Antarctica halogenated monoterpenes; metabolite diversity; haplotype diversity; Plocamium; Antarctica
►▼ Show Figures 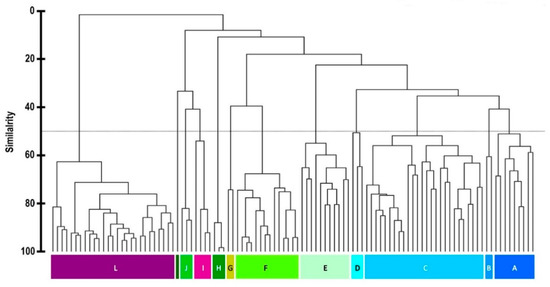