The Antioxidant Activity of Polysaccharides Derived from Marine Organisms: An Overview
Next Article in Special Issue

Chronic obstructive pulmonary disease (COPD) is caused by the prolonged inhalation of noxious gases, primarily cigarette smoke [1]. Cigarette smoke contains many harmful substances such as oxidants [2]. It has been hypothesized that the etiology of COPD stems from an oxidant–antioxidant imbalance and a protease–antiprotease imbalance. Oxidative stress is an important factor in COPD pathogenesis [3]. Therefore, antioxidant treatment has recently attracted attention in COPD research [4]. Nuclear factor erythroid 2-related factor 2 (Nrf2) is a transcription factor that regulates antioxidant capacity [5]. Nrf2 translocates to the nucleus of the cell and binds to the antioxidant response element (ARE) in response to oxidative stress. Subsequently, Nrf2 initiates the transcription of antioxidant genes and the expression of corresponding proteins. The activation of the Nrf2–ARE signaling pathway is known to be a primary mechanism in the defense against oxidative stress [6]. It has been reported that Nrf2-deficient mice are highly susceptible to cigarette smoke-induced lung injury [7,8]. In addition, the overexpression of Nrf2 was reported to protect against cigarette smoke-induced cell apoptosis [9,10]. These reports suggest that Nrf2 activation protects against the oxidative stress seen in cigarette smoke-induced emphysema.
Astaxanthin is a xanthophyll carotenoid that is widely distributed throughout the world, particularly in marine environments. This compound has potent antioxidant activity, which has been shown to be greater than that of other carotenoids and vitamin E [11,12]. In addition, several studies have reported that astaxanthin activates the Nrf2–ARE signaling pathway as the mechanism for exerting its antioxidant effects [13,14,15,16,17]. However, the suppression of cigarette smoke-induced emphysema by astaxanthin via its antioxidant activity has not yet been reported.
Based on these reports, we hypothesize that astaxanthin enhances Nrf2 expression in the lungs, attenuates oxidative stress, and ameliorates cigarette smoke-induced emphysema. To address this hypothesis, we examined the Nrf2–ARE signaling pathway and the emphysema suppression effect by administering astaxanthin in a murine model of COPD.

2.2. Nrf2 and HO-1 Expression Levels Were Increased in Astaxanthin-Fed Mice

C57BL/6 mice (male, four weeks old, 18–20 g) were obtained from Japan SLC (Shizuoka, Japan) and kept under pathogen-free conditions. The mice were maintained at a controlled temperature of 23 °C ± 2 °C under a 12:12 h light–dark cycle with free access to water. The mice were divided into four groups as follows: (1) control (n = 8), (2) smoking (n = 8), (3) astaxanthin (n = 8), (4) astaxanthin + smoking (n = 8). All mice were acclimatized to the environment for one week. The mice in the astaxanthin and astaxanthin + smoking groups were fed a diet containing astaxanthin (FUJIFILM ASTAXANTHIN 10O; FUJIFILM Corporation, Tokyo, Japan). We prepared the diet to contain 0.02% (w/w) astaxanthin; the concentration of astaxanthin was measured by using high-performance liquid chromatography after enzymatic degradation of fatty acid ester form of astaxanthin to free form of astaxanthin. The actual concentration of the diet was determined to be 0.0158% (w/w). The mice in the control and smoking groups were fed a standard diet. All experimental protocols were approved by the Ethics Committee of the Institutional Animal Care and Use of Osaka City University Graduate School of Medicine (17023, 6/11/2017). Animal experiments were conducted in accordance with the Regulations on Animal Experiments in Osaka City University following the Guidelines for Proper Conduct of Animal Experiments in Japan.

4.3. Treatments and Preparation for Evaluation

At the end of the 12-week experimental period, all mice were sacrificed under deep anesthesia. The mice were tracheotomized and cannulated, and bronchoalveolar lavage (BAL) was performed three times with 0.5 mL phosphate-buffered saline for sampling of the BALF. After BAL, the right lung of each mouse was carefully excised. The right lower lobe was instantly soaked in RNAlater (Invitrogen by Thermo Fisher Scientific, Waltham, MA, USA) for mRNA expression analysis. The other right lobe was immediately frozen in liquid nitrogen for protein expression analysis. The left lung was excised and immediately soaked in 10% formalin for further histological analysis.

The right lung other than the lower lobe was used for Western blot analysis. Approximately 30 mg of the lung sample was soaked in 300 µL of radioimmunoprecipitation assay (RIPA) buffer (Beyotime Biotechnology, Shanghai, China) supplemented with the protease inhibitor phenylmethanesulfonyl fluoride (Beyotime Biotechnology, Shanghai, China) and Protease Inhibitor Cocktail (Cell Signaling Technology Japan, Tokyo, Japan). After the lung samples were homogenized in RIPA buffer, the samples were placed on ice for 5 min and centrifuged at 11,800× g and 4 °C for 4 min. The supernatant was collected, and the protein concentration was determined with the colorimetric bicinchoninic acid protein assay kit (Pierce, Waltham, MA, USA) according to the manufacturer’s instructions. The supernatant was subjected to sodium dodecyl sulfate polyacrylamide gel electrophoresis with Mini-PROTEAN TGX Precast Protein Gels (4561023, Bio-Rad, Hercules, California, USA). Next, the separated bands on the gel were transferred onto polyvinylidene fluoride membranes. The membranes were then incubated with primary anti-Nrf2 antibody (1:500; ab137550, Abcam, Cambridge, UK), anti-HO-1 antibody (1:250; ab13248, Abcam), or anti-β-actin antibody (1:1000; ab8227, Abcam) at 4 °C overnight. The next day, the membranes were incubated with the corresponding secondary antibodies for 2 h at 25 °C. After washing the membranes three times, SuperSignal West Dura Extended Duration Substrate (Thermo Fisher Scientific, Waltham, MA, USA) was used for detection. Western blot signals were acquired with a Fuji LAS-4000 fluorescence imager (Fujifilm Corporation, Tokyo, Japan). The target protein levels were normalized to β-actin.

Each BALF sample was centrifuged at 1200× g and 4 °C for 10 min, and the supernatant was collected. The cell pellet was resuspended in 1 mL of phosphate-buffered saline and applied to cytospin columns in a Shandon Cytospin 3 centrifuge (Shandon Scientific Co., London, England), and the cytospin protocol was followed. The slides sprayed with the cells were stained with Diff-Quick (Sysmex, Kobe, Japan), and the enumeration of cells and the differential cell counts (macrophages, neutrophils, and lymphocytes) were performed in a blind manner.

The left lung was fixed with 10% formalin for 24–48 h at positive pressure (25 cm H2O) and subjected to histological analysis. Three-micrometer-thick slices were stained with hematoxylin and eosin for the analysis of the level of airspace size in the lung. Emphysema was evaluated by determining the MLI as previously described [50]. Moreover, destruction was evaluated by determining the destructive index as previously described [51].

COPD is associated with an excessive oxidant burden; therefore, the rationale for exploring antioxidant therapies in COPD is clear. Astaxanthin increases Nrf2 and HO-1 expression in the lung and suppresses cigarette smoke-induced emphysema in mice. Therapy directed toward activating the Nrf2–ARE pathway, such as the use of astaxanthin, may be a novel preventive and therapeutic strategy for attenuating oxidative stress in the pathogenesis of COPD.

This work was supported by research grants from JSPS KAKENHI Grant Number 19K08660 to Kazuhisa Asai.

Real-time PCR analysis and Western blot analysis were performed at the Research Support Platform of Osaka City University Graduate School of Medicine. The authors would like to thank FUJIFILM Corporation for providing astaxanthin. 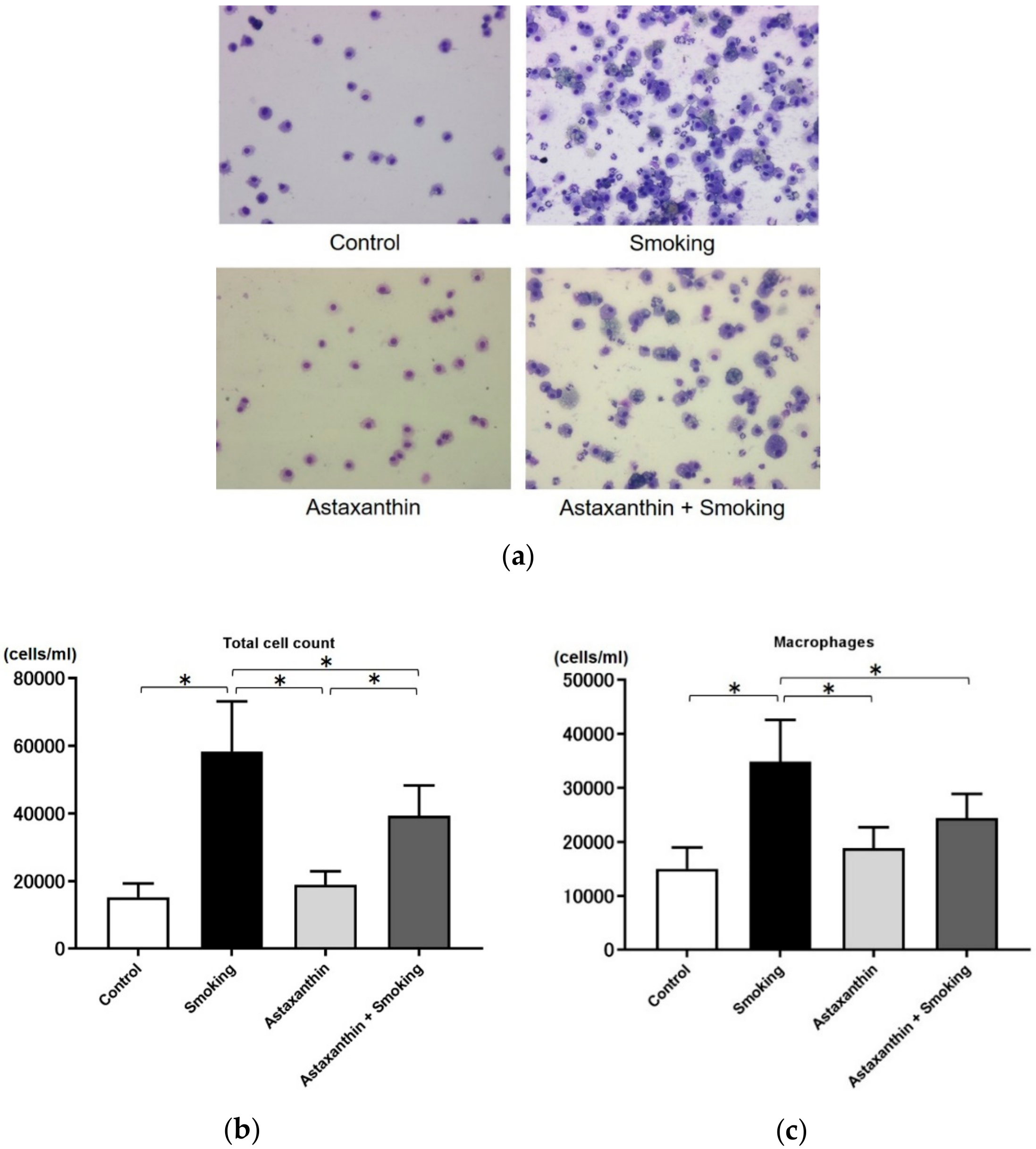 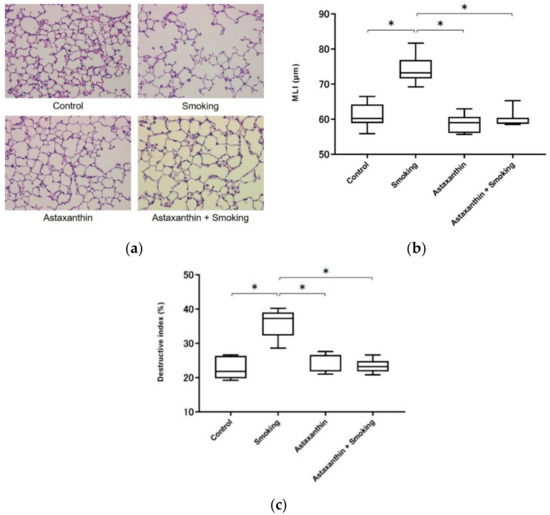 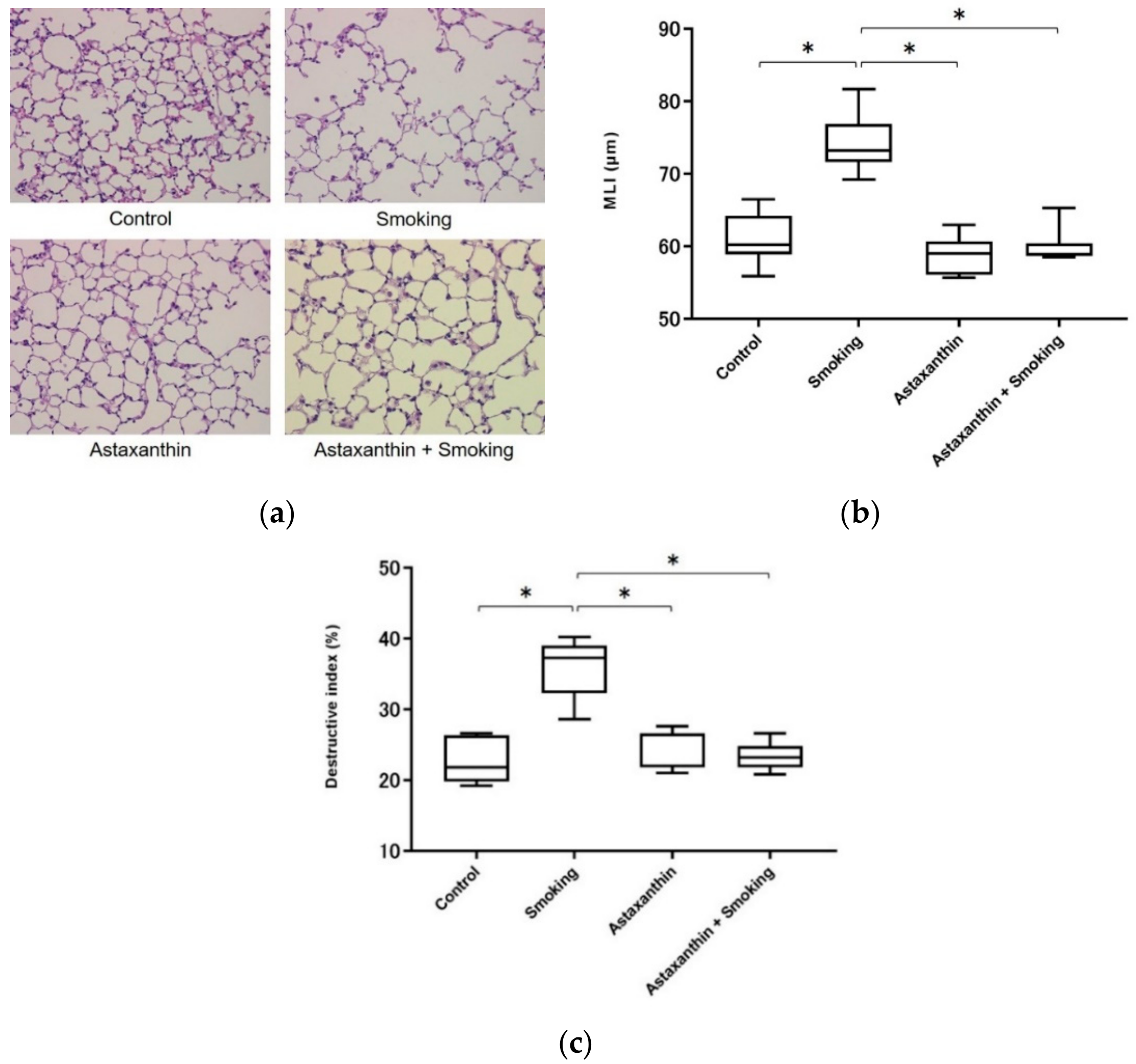