:
Background and Objectives: Our study aimed to investigate the gross anatomy aspects of the fossa ovalis (FO) and the presence of some anatomical variation resulting from the incomplete fusion of septum primum and septum secundum, such as an atrial septal pouch (SP) and left atrial septal ridge. Materials and Methods: Thirty-one adult human hearts removed from formalin-fixed specimens were examined to provide information about the morphology of the FO. The organs were free of any gross anatomically visible pathological conditions. Results: The most common variants were the FO located in the inferior part of the interatrial septum (64.51%), circular (61.3%), with a net-like structure (51.62%), prominent limbus (93.55%), and patent foramen ovale (PFO) (25.8%). The right SP was observed in 9.67% of specimens, the left SP was observed in 29.03% of cases, and in 51.61% of cases, a double SP was observed. One sample presented a right SP and a double left SP, and one case showed a triple left SP, which was not reported previously to our knowledge. Conclusions: Knowledge of the interatrial septal anatomy becomes important for interventional cardiologists and should be documented before transeptal puncture.
Keywords:
anatomy; interatrial septum; fossa ovalis

A true septum represents a partitioning wall shared by two structures [1], which can be removed without exiting the heart’s cavities [2]. Regarding the interatrial septum, in the literature, these are described as the atrial septum and the “true”, clinically significant, interatrial septum [3]. The classically atrial septum is bound superiorly by the ostium of the superior vena cava, inferiorly by the ostium of inferior vena cava, antero-inferiorly by the coronary sinus orifice, anteriorly by the right atrioventricular ring, and posteriorly by the folds of the atrial wall. The “true” atrial septum is represented by the valve of the foramen ovale and its anteroinferior base and represents 20% of the classically interatrial septum area [2]. During the third week of intrauterine life, the progenitor heart cells appear in the epiblast. They will become the primary heart area, a horseshoe-shaped cluster of cells located in the splanchnic mesoderm layer. These cells will form the paired cardiac tube. The primitive heart tube is formed by fusion of the two endocardial tubes on the 22nd day, which narrows and lengthens and is formed by five segments called the sinus venosus, primitive atrium, primitive ventricle, bulbus cordis, and truncus arteriosus. These primitive heart tubes will be partitioned by forming the atrial septum, atrioventricular septum, aorticopulmonary septum, and interventricular septum in four chambers [4]. Septation of the atrium begins with the formation of the septum primum, crescentic sagittal septum, which grows from the roof of the common atrium toward the atrioventricular septum, formed by the endocardial cushions developed in the atrioventricular canals [5]. The lower edge of the septum primum delimits with the endocardial cushions, an orifice, the ostium primum, which maintains the communication between the two atriums. The septum primum will fuse with endocardial cushions, but at the same time, another orifice, the ostium secundum, appears in the superior part of the septum primum. Initially, multiple secondary perforations occur in the septum primum, which will soon coalesce to form the single orifice, called the ostium secundum. The closure continues because another crescentic-shaped septum, the septum secundum, goes down from the superior surface of the right atrium, on the right side of the septum primum, and closes the ostium secundum partially. The opening left in the septum secundum is called the foramen ovale. It allows blood circulation from the right atrium to the left atrium during fetal life. The inferior part of the septum primum sends an expansion, the valve of foramen ovale, “the valve of Vieussens”, which is not attached and allows blood circulation during fetal life from the right atrium to the left atrium. After birth, the changes in the pulmonary circulation increase the left atrial pressure, which presses the valve of the foramen ovale against the septum secundum and closes the foramen ovale. The formation of multiple perforations in the septum primum is a characteristic of placental mammals, including humans [6]. In monotreme and marsupial mammals, birds, and reptiles, the perforations in the septum primum do not coalesce to form the ostium secundum. They are sealed by myocardial and endocardial growth after birth [7]. According to Anderson [2], the septum primum persists as the valve of the foramen ovale, the classical septum secundum represents an infolding from the atrial roof, which forms the superior part of the limbus of the fossa ovalis (FO), and the rest of the limbus is produced by the muscularization of the vestibular spine.
Our study supplements the knowledge of the morphology of the “true” interatrial septum, which is important in order to avoid exiting the heart during interventional cardiac procedures [8].

The study was conducted in the Department of Anatomy and Embryology, “Victor Babeş” University of Medicine and Pharmacy, Timisoara, and included 31 human hearts removed from formalin-fixed specimens. The hearts were free of any gross anatomically visible pathological conditions. The right atrium was opened by a classical incision [9], extending between the orifices of the superior and inferior vena cava and medially from the sulcus terminalis. The left atrium was opened by an H-shaped incision, composed of two vertical incisions between the left pulmonary veins and the right pulmonary veins, and one horizontal incision connecting the mid-point of the other two. After opening the right atrium, the FO was examined regarding its morphology and permeability, with the heart in the anatomical position. In addition, the following aspects of FO were noted and photographed:

Thirty-one formalin-fixed human hearts were carefully examined, with observations below on the morphology of the FO:
Regarding the position of FO in the interatrial septum, FO was positioned as inferior in 20 specimens (64.51%), anterosuperior in 2 specimens (6.45%), and in the middle of the interatrial septum in 9 specimens (29.03%).
The shape of the FO (Figure 1) was variable; namely, it was elliptical in 2 specimens (6.45%), oval in 10 specimens (32.25%), and circular in 19 specimens (61.3%).
The aspect of the FO was smooth in 15 specimens (48.38%) and has a net-like structure or was cribriform in 16 specimens (51.62%). Cribriform FO presents the fibrous-strands, different from the Chiari network, described in the literature as a mobile reticulated network structure originating from the Eustachian valve, connecting to other parts of the right atrium [10,11]. In the 16 specimens, these net-like structures were observed in:

A triple left SP (Figure 5) was found in one case, separated by a fibro-muscular bundle with four horns. Two of the left SPs were superficial with the concavity posteroinferior and posterior, and one was superficial with the concavity superior. All three cavities had the apex orientated downward, at the same level, and there was no communication between them.
In one case (Figure 2), we found a right SP in the superior part of the limbus, with inferior concavity and the apex orientated upward, as well as a double left SP, both with superior concavity and the apex orientated downward, delimitated by three fibro-muscular bundles, one common, one anterior, and one posterior.
PFO (Figure 6) was present in six cases (19.35%), in which the aspect of FO was smooth. The SP had the opening in the right atrium and was located in the superior part of the circumference of the FO, as well as in two cases in which the aspect of FO was the net-like structure (6.45%).

Knowledge of the morphology of the FO becomes essential during cardiac surgery, especially the net-like structure of FO and the presence of the SP, which can create complications during the transseptal puncture and catheter manipulation.

The study was conducted according to the guidelines of the Declaration of Helsinki and approved by the Ethics Committee of the “Victor Babeș” University of Medicine and Pharmacy, Timișoara, Romania (protocol code 30/23.09.2019).

We would like to thank all the people who voluntarily donated their bodies for education and anatomical research. 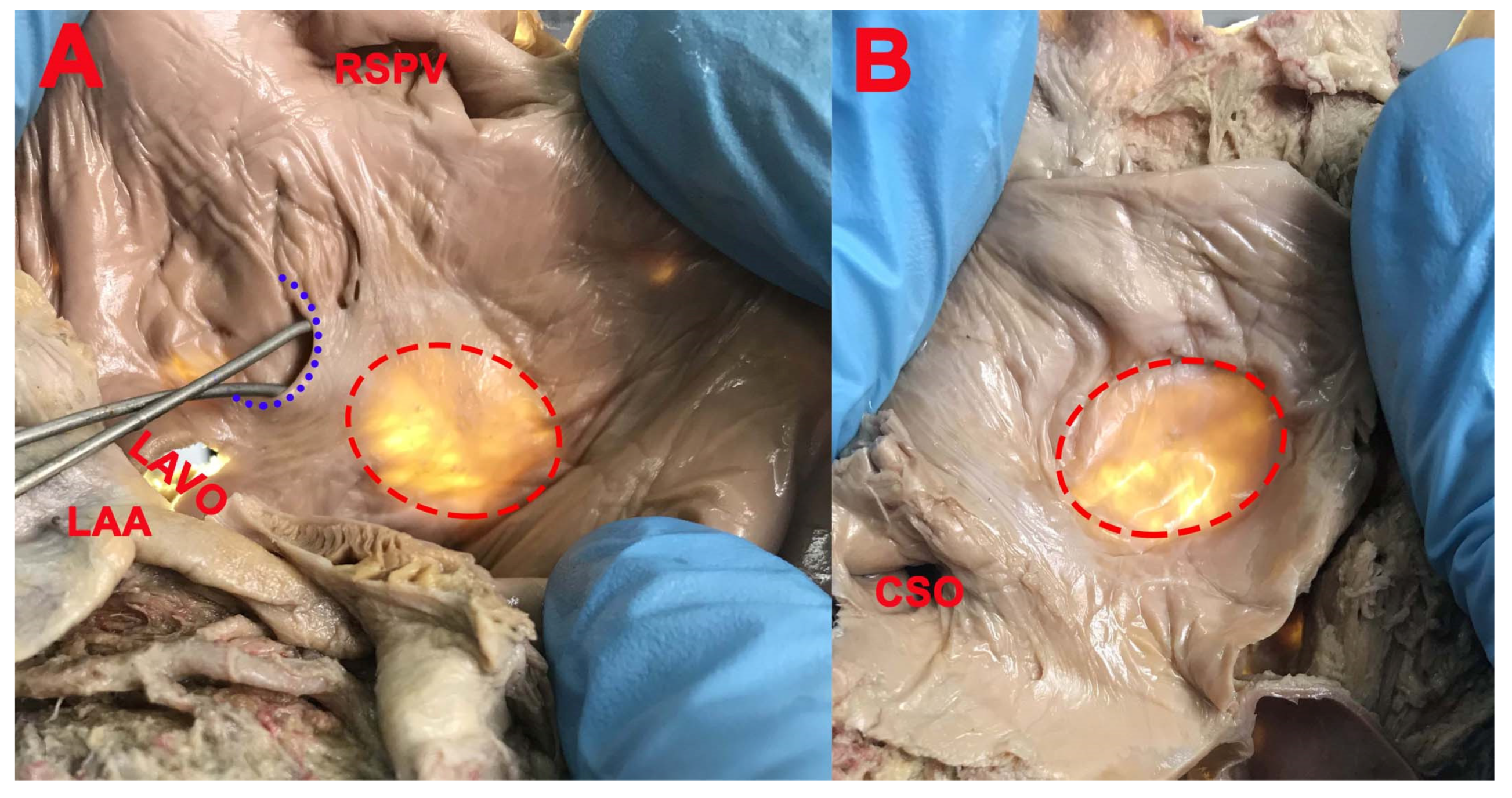