Preparation, Characterization, and Evaluation of Cisplatin-Loaded Polybutylcyanoacrylate Nanoparticles with Improved In Vitro and In Vivo Anticancer Activities
Next Article in Special Issue

Regenerative Injections Including 5% Dextrose and Platelet-Rich Plasma for the Treatment of Carpal Tunnel Syndrome: A Systematic Review and Network Meta-Analysis
Previous Article in Journal

Is There a Role for the Therapeutic Drug Monitoring of Colistin? An Overview
Previous Article in Special Issue

Epilepsy is a chronic neurological disease characterized by excessive neuronal activity leading to seizure; about 30% of affected patients suffer from the refractory and pharmacoresistant form of the disease. The anticonvulsant drugs currently used for seizure control are associated with adverse reactions, making it important to search for more effective drugs with fewer adverse reactions. There is increasing evidence that endocannabinoids can pharmacologically modulate action against seizure and antiepileptic disorders. Therefore, the objective of this study is to investigate the anticonvulsant effects of fatty acid amides (FAAs) in a pentylenetetrazole (PTZ)-induced seizure model in mice. FAAs (FAA1 and FAA2) are obtained from Carapa guianensis oil by biocatalysis and are characterized by Fourier Transform Infrared Analysis (FT-IR) and Gas Chromatography-Mass Spectrometry (GC-MS). Only FAA1 is effective in controlling the increased latency time of the first myoclonic jerk and in significantly decreasing the total duration of tonic-clonic seizures relative to the pentylenetetrazol model. Also, electrocortical alterations produced by pentylenetetrazol are reduced when treated by FAA1 that subsequently decreased wave amplitude and energy in Beta rhythm. The anticonvulsant effects of FAA1 are reversed by flumazenil, a benzodiazepine antagonist on Gamma-Aminobutyric Acid-A (GABA-A) receptors, indicating a mode of action via the benzodiazepine site of these receptors. To conclude, the FAA obtained from C. guianensis oil is promising against PTZ-induced seizures. View Full-Text
Keywords: seizures; pentylenetetrazole; electrocorticographic recordings; biocatalysis; palmitoylethanolamide seizures; pentylenetetrazole; electrocorticographic recordings; biocatalysis; palmitoylethanolamide
►▼ Show Figures 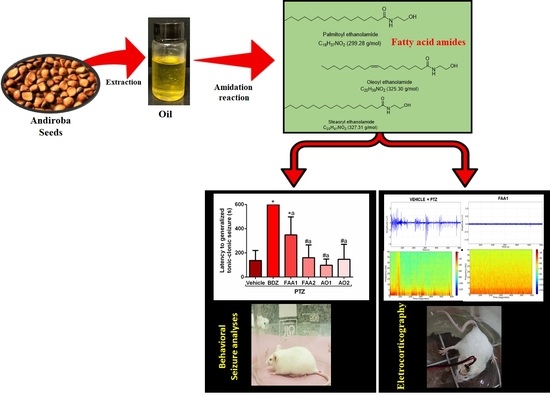