Snakebite envenomings are a global public health issue. The therapy based on the administration of animal-derived antivenoms has limited efficacy against the venom-induced local tissue damage, which often leads to permanent disability. Therefore, there is a need to find inhibitors against toxins responsible for local damage. This work aimed to synthesize thioesters derived from 2-sulfenyl ethylacetate and to evaluate the inhibitory effects on two snake venom toxins. Ethyl 2-((4-chlorobenzoyl)thio)acetate (I), Ethyl 2-((3-nitrobenzoyl)thio)acetate (II) and Ethyl 2-((4-nitrobenzoyl)thio)acetate (III) were synthesized and spectroscopically characterized. Computational calculations were performed to support the study. The inhibitory capacity of compounds (I–III) was evaluated on a phospholipase A2 (Cdcum6) isolated from the venom of the Colombian rattlesnake Crotalus durissus cumanensis and the P-I type metalloproteinase Batx-I isolated from Bothrops atrox. I–III inhibited PLA2 with IC50 values of 193.2, 305.4 and 132.7 µM, respectively. Otherwise, compounds II and III inhibited the proteolytic activity of Batx-I with IC50 of 2774 and 1879 µM. Molecular docking studies show that inhibition of PLA2 may be due to interactions of the studied compounds with amino acids in the catalytic site and the cofactor Ca2+. Probably, a blockage of the hydrophobic channel and some amino acids of the interfacial binding surface of PLA2 may occur.
Keywords: snakebite; thioester; phospholipase A2; snake venom metalloproteinase; molecular docking snakebite; thioester; phospholipase A2; snake venom metalloproteinase; molecular docking

The World Health Organization (WHO) recognized snakebites as one of the most important Neglected Tropical Diseases in 2017. Nearly 5.4 million snakebites occur each year, and more than 95% of cases occur in tropical or developing countries, mostly in rural areas [1]. There are between 81,410 and 137,880 deaths per year and around three times as many cases of permanent disabilities including amputations [2]. A total of 4978 ophidian accidents were reported in Colombia in 2017 [3].
Pathophysiological effects observed in snakebite envenomations combine the action of several enzymes, proteins and peptides, such as phospholipases A2 (PLA2), hemorrhagic metalloproteinases, and other proteolytic enzymes, coagulant components, neurotoxins, cytotoxins and cardiotoxins, among others [4]. Snake venom metalloproteinases (SVMPs) have been shown to participate in the hemorrhagic process by proteolytic degradation of endothelial cell surface proteins and extracellular matrix components, involved in the maintenance of capillary structure and integrity, leading to capillary network disruption, edema and hemorrhage [5]. Phospholipases A2 (PLA2) are calcium-depending enzymes that hydrolyze the sn2 ester bond of glycerophospholipids, inducing systemic and local myotoxicity, myonecrosis, neurotoxicity hemolytic activity, among others [6,7].
Nowadays, the only available and accepted therapy for the treatment of snakebites is the intravenous administration of equine or ovine antivenoms [8]. Nevertheless, several reports demonstrated the limited efficacy of antivenom therapy against the local tissue damage caused by venoms [9]. Therefore, there is a need for specific inhibitors of enzymes responsible for local damage to complement conventional parenteral antivenom therapy.
As usual in drug discovery, inhibitors could be found in natural sources or obtained by chemical synthesis, and in some cases in combination with in silico methodologies. This strategy was used for synthesizing naringenin derivatives which have structural similarity with quercetin, a flavonoid that binds to the active site of a PLA2 [10].
There are reports of natural and synthetic inhibitors of PLA2 from snake venoms including substituted thiobenzoic acid S-benzyl esters [11], Aiplai from leaves of Azadirachta indica [12] and cholic and ursodeoxycholic acids [13]. Some of the inhibitors have reported IC50 with the same methodology that we use; Pinostrobin, a flavonone isolated from Renealmia alpinia, with an IC50 of 1.85 mM [14]; and Morelloflavone, a biflavonoid from Garcinia madruno, with IC50 of 0.38 mM [15].
In a previous study we found that substituted thiobenzoic acid S-benzyl esters are inhibitors of an Asp49-PLA2 enzyme isolated from the venom of the Colombian Crotalus durissus cumanensis rattlesnake, but they have solubility drawbacks [11]. Looking for increasing the polarity and maintaining the biological activity, thioesters derived from 2-sulfenyl ethyl acetate were synthesized changing a phenyl group for an ethyl ester (Figure 1, Table 1). The present study aims to evaluate the inhibitory capacity of these compounds on the PLA2 from C. d. cumanensis rattlesnake and a PI type SVMP from Bothrops atrox venom.

We report the synthesis and characterization by GC-MS, IR and NMR of thioesters derived from 2-sulfenyl ethylacetate. Spectra are available as Supplementary Material.

The synthetized compounds inhibited the PLA2 activity in a dose dependent way. IC50 values were 193.2, 305.4 and 132.7 μM for compounds I, II and III respectively. The results and confidence interval values are shown in Table 2. The determination of IC50 value was determined from a logistic-dose response curve (Figure 2).

The bridge that connect thioester and ester moieties was explored through a potential energy curve around the dihedral angle δ S-C-C=O using a B3LYP/6-31++G(d,p) approximation. We found two minima at 0° and at 120° with a small energy difference (1 kJ/mol) that indicate the coexistence of both conformers (Figure 4).
The geometric parameters and vibrational frequencies for both conformers were calculated at the same level of theory. The dihedral angle values calculated for the thioester and ester moieties are presented in Table 3.

To suggest the mechanism of inhibition of the PLA2, docking studies with the active compounds were performed using the available protein structure (PDB code 2QOG).
Docking conformations with the lowest binding energy were selected and described. The observed binding free energies with the enzyme PLA2 were −23.0; −24.7 and −23.9 kJ/mol for compounds I, II and III, respectively.
Docking results suggested that compounds I–III could form interactions with the residues His 48, Asp 49 and the cofactor Ca2+, belonging to the PLA2’s active site. In addition, these compounds may interact with amino acids located at the enzyme’s hydrophobic channel and interfacial binding surface, blocking the free access of glycerophospholipids to the active site of the enzyme (Figure 5 and Figure 6).

Reagents were purchased from Merck, Sigma-Aldrich and Acros organics with commercial, analytic or HPLC grade.
Solvents were evaporated from solutions in a rotary evaporator Heidolph Laborota 4010 equipped with a ROTAVAP valve control.

Melting points (m.p.) were recorded in an Electrothermal 9100 apparatus. Infrared spectra in KBr pellets were measured between 4000 and 400 cm−1 (4 cm−1 resolution) with and FT-IR spectrometer Thermo-Nicolet IR200. The mass spectra were measured with a CG-MS Shimadzu QP-2010 spectrometer with a HP-5 column. NMR spectra were measured at 298 K on a Bruker DPX 200 spectrometer. The compounds were dissolved in CDCl3. Chemical shifts, δ, are given in ppm relative to TMS (δ = 0 ppm) and are referenced by using the residual undeuterated solvent signal. Coupling constants, J, are reported in Hz, multiplicities being marked as: singlet (s), doublet (d), triplet (t), double triplet (dt) of multiplet (m).

The PLA2 from C. d. cumanensis was obtained from a pool venom of four specimens maintained in captivity at the serpentarium of the University of Antioquia (Medellín, Colombia).
The enzyme was purified through reverse-phase HPLC on C-18 column eluted at 1.0 mL/min with a gradient from 0% to 100% of acetonitrile in 0.1% trifluoroacetic acid (v/v). The absorbance in the effluent solution was recorded at wavelength of 280 nm [26].
Baxt-I was isolated from a venom pool collected from adult specimens of B. atrox from Meta, southeastern Colombia, via ion-exchange chromatography (CM-Sephadex C25) following the protocol described by Patiño et al. (2010) [27]. For both proteins, the purity was judged by RP-HPLC and SDS-PAGE.

The measurements of enzymatic activity using the monodispersed substrate 4N3OBA were performed according to the method described by Holzer and Mackessy (1996), and adapted for a 96-well ELISA plate. The standard assay contained 200 μL of buffer (10 mM Tris–HCl, 10 mM CaCl2, 100 mM NaCl, pH 8.0), 20 μL of 10 mM of substrate (4NO3BA), 20 μL of sample (20 μg PLA2 or 20 μg PLA2 + several concentrations of compounds) and 20 μL of water. The negative control was only buffer. The inhibitory effect of the studied thioesters on PLA2 activity was determined through co-incubation of the enzyme with each concentration of the compound for 30 min at 37 °C. After the incubation period, the sample was added to the assay and the reaction was monitored at 425 nm for 40 min (at 10 min intervals) at 37 °C. The quantity of chromophore released (4-nitro-3-hydroxy benzoic acid) was proportional to the enzymatic activity, and the IC50 value was determined from a logistic-dose response curve.

The inhibition of proteolytic activity was measured using the EnzCheck® Gelatinase/Collagenase assay kit (Molecular Probes Inc., Eugene, Oregon, USA) following the protocol described by Preciado et al. (2017) with modification [28]. Briefly, aliquots of 80 μL of each triterpenic acid in concentrations from 15 to 500 μM, or buffer (0.05 M Tris-HCl, 0.15 M NaCl, 5 mM CaCl2, 0.2 mM sodium azide) as positive control, were added to each well of a 96-well plate. Then, 20 μL of DQ-gelatin followed by 100 μL of active Batx-I (1 μg/μL) were added, and the fluorescence intensity was measured by a Synergy HT Multi-Mode Microplate Reader (BioTek Instruments, Inc.; Winooski, USA) for excitation at 485 nm and emission detection at 515 nm at each minute for 60 min. Each reaction was performed in triplicate.

Compounds (I–III) were built using Gauss View 5 [29]. The geometric parameters for the more stable conformers were calculated at the B3LYP/6-31++G (d,p) level of approximation using GAUSSIAN 09 [30]. Molecular docking was carried out on a personal computer using Autodock Vina [31]. The structure of the PLA2 (PDB code 2QOG) from Crotalus durissus terrificus that showed 57% of homology with the PLA2 from C. d. cumanensis [24] was used in this study.
Protein structure was prepared using the Protein Preparation module implemented in the Maestro program and uploaded without water molecules. Hydrogen atoms were automatically added to the protein according to the chemical nature of each amino acid, on the basis of the ionized form expected in physiological condition. This module also controls the atomic charges assignment. The 3D structure of the protein was relaxed through constrained local minimization, using the OPLS force fields in order to remove possible structural mismatches due to the automatic procedure employed to add the hydrogen atoms. When necessary, bonds, bond orders, hybridizations and hydrogen atoms were added, charges were assigned (a formal charge of +2 for Ca ion) and flexible torsions of ligands were detected.
To perform molecular docking experiments of compounds I–III with PLA2, the α-carbon of His48 was used as the center of the grid (X = 44.981, Y = 27.889 and Z = 46.392), whose size was 24 Å3. Exhaustiveness = 20. Finally, the ligand poses with best affinity were chosen, and a visual inspection of the interactions at the active site was performed and recorded using the open functionalities of Discovery Studio Visualizer and UCSF Chimera (www.cgl.ucsf.edu/chimera/). Physicochemical properties with importance in oral bioavailability for compounds I–III were calculated using Molinspiration [32].

In order to determine significant differences between the concentrations of the compounds I–III used in the inhibition of the enzymes metalloproteinase and PLA2, two-way ANOVA followed by Bonferroni’s test was applied. In all cases, a difference with a p < 0.05 was considered significant.

Thioesters derived from 2-sulfenyl ethylacetate inhibited, in a specific way, PLA2 activity in micromolar concentrations. Although, we found that compounds II and III could inhibit the activity of Batx, IC50 values were around 10 times higher than those found for PLA2. It is suggested that inhibition of PLA2 activity is due to blockade of the active site and the interaction with amino acids involved in catalysis and binding substrate. Our results also suggest that compound III may be subject to further studies to develop inhibitors of snake venom PLA2.

This project was developed with the permission to access to genetic resources and their derived products from Ministerio de Ambiente y Desarrollo Sostenible No. 152 of 2017, resolution 2405, Colombia. 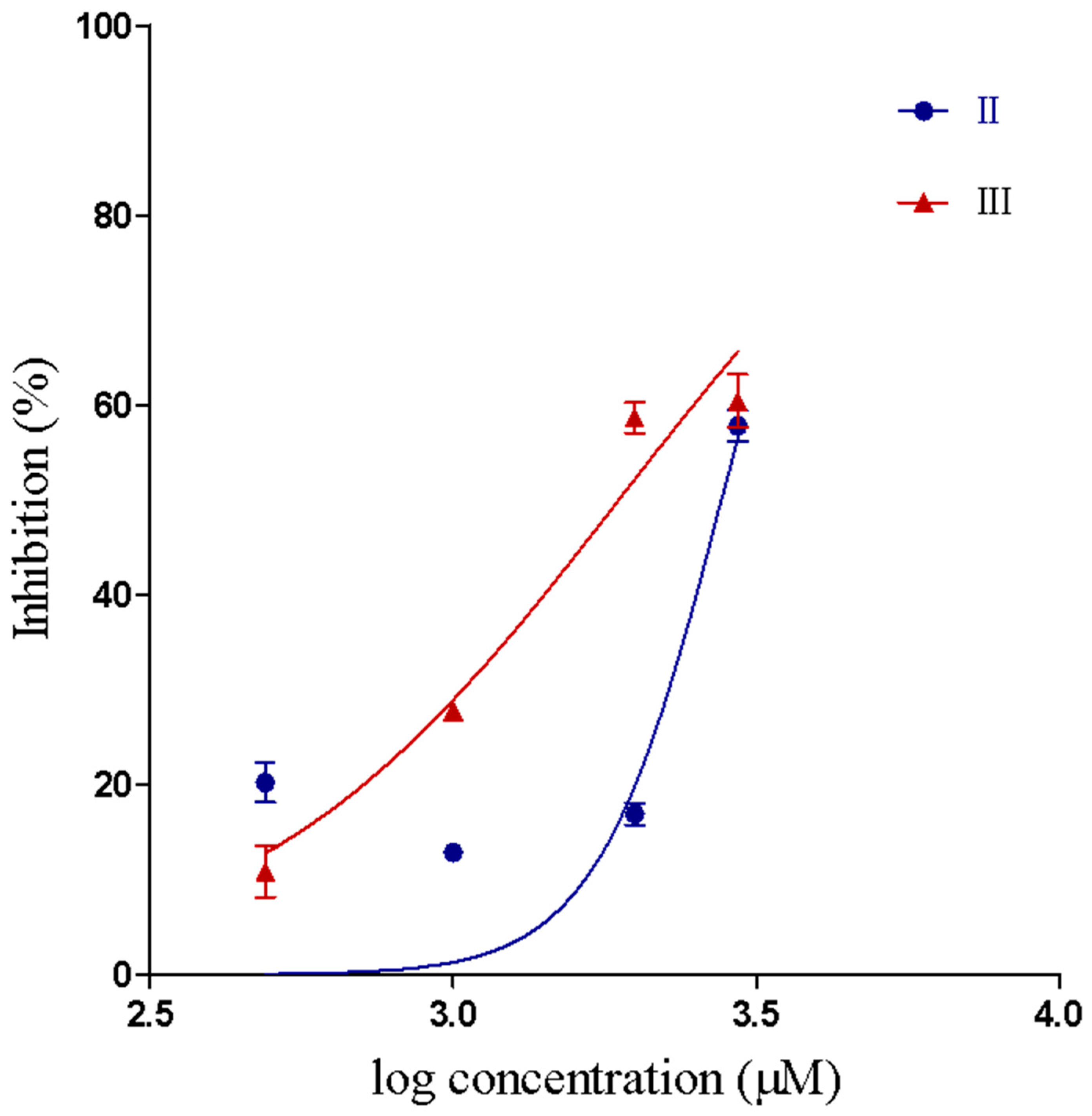 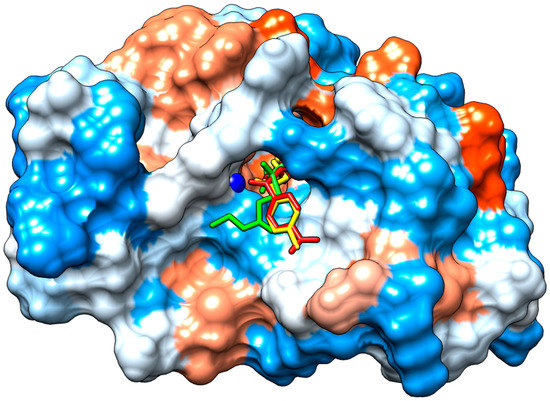 Table 3. Dihedral angle values for stable conformers.
Table 3. Dihedral angle values for stable conformers.
Calculated with B3LYP/6-31++G(d,p) level of approximation.
© 2019 by the authors. Licensee MDPI, Basel, Switzerland. This article is an open access article distributed under the terms and conditions of the Creative Commons Attribution (CC BY) license (http://creativecommons.org/licenses/by/4.0/).
We use cookies on our website to ensure you get the best experience. Read more about our cookies here.
Accept
We have just recently launched a new version of our website. Help us to further improve by taking part in this short 5 minute survey here. here.
Never show this again