Cancer, a complex disease characterized by uncontrolled cell growth, is one of the main causes of morbidity and mortality in both developed and developing countries [1,2,3]. Chemotherapeutic agents can controlled the dissemination of several tumors and improve the quality of life in most patients with cancer. Currently, 5-fluorouracil (5-FU) is one of the major chemotherapeutic agents used for the treatment of cancer. 5-FU is a fluorinated pyrimidine with antimetabolite activity. However, it can cause side effects such as nausea, vomiting, diarrhea, myelosuppression, and intestinal mucositis [4,5,6,7,8,9].
Mucositis is initiated by basal cell lesions in the gastrointestinal tract, resulting in mucosal damage, intense inflammatory reaction, and consequent ulceration. It affects around 40% of patients treated with chemotherapeutic agents [10,11]. Intestinal mucositis can increase the risk of bacterial translocation and sepsis, thus impairing the continuity of anticancer treatment.
Owing to the lack of efficacious therapeutic tools for the treatment of intestinal mucositis, new alternative therapeutics that can reduce the side effects of 5-FU, without impairing cancer treatment, have been investigated.
Cashew gum (CG), a high-molecular weight complex heteropolysaccharide, is obtained from the exudate of cashew tree (Anacardium occidentale L.) through condensation of a large number of aldose and ketose molecules [12,13]. Its anti-inflammatory, antiulcerogenic, and antidiarrheal activity have been reported in previous studies [14,15,16,17]. In this study, we investigated the effect of CG on 5-FU-induced experimental intestinal mucositis. In addition, we evaluated its effect on inflammatory process and oxidative stress, as well as the involvement of cyclooxygenase 2 (COX-2).

Analysis of leukocyte count in blood showed a significant decrease (p < 0.05) in the number of total leukocytes in 5-FU group compared to that in the saline group. In contrast, CG pretreatment reduced 5-FU-induced leukopenia (p < 0.05) (Figure 3A).

To investigate the effects of CG pretreatment on neutrophil recruitment in 5-FU-induced intestinal mucositis, we determined the activity of myeloperoxidase (MPO), a neutrophil marker. The 5-FU group presented a significant increase in MPO levels in the duodenum compared to the saline group (p < 0.05). CG (90 mg/kg) pretreatment decreased MPO levels in the duodenum of mice subjected to 5-FU-induced intestinal mucositis (p < 0.05), which in turn decreased polymorphonuclear leukocyte infiltration (Figure 3B).

2.7. Effect of CG on Cyclooxygenase-2 Pathway in Histopathological and Morphometric Analyses

2.8. Immunohistochemistry for the Detection of COX-2 and IL-1β

The animals were obtained from the Department of Surgery of the Federal University of Ceara (UFC) were used. The male Swiss mice (25–30 g) were housed in polypropylene cages, lined with wood, in a controlled environment with a temperature of 23 ± 2 °C, in a cycle of 12 h light/12 h dark, with free access to water and standard feed. The procedures and experimental protocols were approved by the Ethics Committee on Animal Use (n° 208/16) from the Federal University of Piaui (CEUA/UFPI).

4.3. Extraction and Purification of Cashew Gum

The CG was purified with sodium salt, as previously described [60]. Bark free nodules were selected and dissolved at a final concentration of 5% (w/v) in distilled water. The pH of the solution was adjusted to approximately 7.0. The clear solution was successively filtered through sintered glass and the heteropolysaccharide was precipitated with ethanol [61,62].

The experimental intestinal mucositis model in Swiss Mice was induced as described by Soares et al. [39]. The 5-FU (450 mg/kg) was given intraperitoneally (i.p) in a single dose on the first day of the experimental protocol. Three days of treatment with CG were performed. The mice were pretreated daily with oral CG (30, 60, 90 mg/kg), 1h before the injection of 5- FU, after then the same oral doses were performed once a day. After four days of treatment, the animals were euthanized by ketamine (270 mg/kg) and xylazine (15 mg/kg) and the intestinal samples were collected. The body weight of mice was measured daily before the treatment administered to confirm the experimental model of intestinal mucositis induced by 5-FU. In this study, the mice was randomly allocated in seven groups (n = 6): Saline (NaCl 0.9%), 5-FU (5-FU + NaCl 0.9%), CG 30 (5-FU + CG 30 mg/kg), CG 60 (5-FU + CG 60 mg/kg), CG 90 (5-FU + CG 90 mg/kg), CLX (5-FU + celecoxib 7.5 mg/kg, i.p), CLX + CG 90 (5-FU + celecoxib 7.5 mg/kg, i.p + CG 90 mg/kg). To investigate the participation of COX-2 on the effects of treatment with CG during intestinal mucositis induced by 5-FU, COX-2 was blocked by celecoxib in an independent experiment. The mice were treated with celecoxib and CG 90 in combination or alone for three days.

After euthanasia, duodenum samples were obtained and fixed in 10% formaldehyde for performing the histopathological and morphometric analysis [63,64]. These samples were embedded in paraffin, sectioned at 4 µm and stained with hematoxylin and eosin (H&E). A blinded and randomized histopathological analysis was performed by an experienced histopathologist to assess the severity of mucositis using a scores system [65], the tissues were ranging from 0 (absence of lesion/normal histological findings) to 3 (maximum lesion degree), indicating shortened villi with vacuolized cells, necrosis of crypts, intense infiltration of inflammatory cells, vacuolization and edema in the mucosal layer and muscular layer with edema, vacuolization and neutrophil infiltrate. The effective concentration of CG in the treatment of mucositis was determined following the histological analysis.

Mice were anesthetized with a combination of anesthetics (xylazine 10m/kg and ketamine 80 mg/kg) and, a peripheral blood sample was collected from the ocular artery, and was diluted in the liquid of Turk at a ratio of 20 μL of blood to 380 μL of solution. The total leukocytes were counted using a Neubauer chamber [66], and the results were expressed as a total number of leukocytes per mm3 of blood.

The MDA is a product of lipid peroxidation frequently used as a marker of oxidative stress. Briefly, the intestinal samples were homogenized (10%) with potassium phosphate buffer (1.15%). Then, were added phosphoric acid (1%) and thiobarbituric acid (0.6%) to the homogenates and incubated at (100 °C, for 45 min) followed by the addition of 1.5 mL n-butanol. The supernatant was obtained and measured after centrifugation (5000 rpm, for 10 min). The results were expressed as nMol of MDA/mg of tissue by 535 nm absorbance measure [67,68].

The concentration of GSH in the duodenal samples was performed according to the method described by Sedlak and Lindsay [69]. The levels of nonprotein sulfhydryl groups (NPSH) were determined from 50 to 100 mg of the intestinal mucosa of each animal. The tissues were homogenized in 1 mL of 0.02M EDTA for each sample. Aliquots of 100 μL of the homogenate were mixed with 80 μL of distilled water and 20 μL of 50% trichloroacetic acid (TCA) for precipitation of proteins. The tubes were centrifuged for 15 min at 3000 rpm at 4 °C. A total of 100 μL of the supernatant was added to 200 μL of 0.4 M Tris buffer (pH 8.9) and 5 μL of 0.01 M 5,5-dithiobis-(2-nitrobenzoic acid) (DTNB, Sigma Aldrich, St. Louis, Missouri, USA). The mixture was then homogenate for 3 min and the absorbance was read at 412 nm. Results were expressed as micrograms of NPSH groups per milliliter of homogenate (μg/mL).

MPO activity was determined by the technique described by Bradley et al [70]. Briefly, the duodenum segments (50–100 mg) were homogenized in 1 mL of potassium buffer containing 0.5% hexadecyltrimethylammonium bromide (HTAB), then centrifuged (4000 rpm, 7 min, 4 °C). The MPO activity was analyzed by measuring the absorbance at 450 nm using diisocyanate dihydrochloride and 1% hydrogen peroxide in the resuspended pellet. The results were recorded as MPO units per mg tissue.

The paraffin blocks with duodenum samples were processed for toluidine blue staining to identified mast cells, according to Michalany [71]. The slides were deparaffinized with xylene, incubated for 3 min with toluidine blue solution (1 g of toluidine blue dissolved in 70% ethanol), washed three times in distilled water, dehydrated, and mounted. The total number of mast cells were counted manually, considering four specimens per group and ten fields per slide. The results were expressed as the mean of 10 fields in each group.

4.11. Immunohistochemistry for the Detection of COX-2 and IL-1β

Duodenal sections were deparaffinized with oven insertion (60 °C) and three cycles of xylol immersion for 5 min each. Then, the sections were rehydrated in decreasing alcohol concentrations (100, 90, 80 and 70%). The histological sections were then washed with distilled water for 10 min and the antigenic recovery in citrate buffer (pH 7.0, DAKO®, Sao Paulo, Brazil) was carried out for 20 min in the water bath (95 °C). The slides were then washed with phosphate-buffered saline solution (PBS) for 5 min at room temperature. Following, endogenous peroxidase blockade with 3% hydrogen peroxide solution (H2O2) was performed for 30 min. The sections were then incubated overnight with goat anti-COX-2 primary antibody (SantaCruz®, Dallas, TX, USA), and rabbit anti-IL-1β (SantaCruz®, Dallas, TX, USA) diluted in antibody diluent (1:100) for 60 min, respectively. After the slides were washed with PBS and incubated with rabbit IgG (GBI Labs®, Bothell, WA, USA) secondary antibody diluted (1:400) for 30 min. For revelation, the sections were incubated with the streptavidin conjugated peroxidase complex (ABC complex) for 30 min and chromogen 3,3′diaminobenzidine peroxide, DAB (DAKO®, Sao Paulo, Brazil), followed by counterstaining with hematoxylin (DAKO®, Sao Paulo, Brazil), for 10 min. Negative controls were processed simultaneously as described above, with the primary antibody being replaced for antibody diluent. The procedures were performed in an automated manner using Autostainer Plus (DAKO®, Sao Paulo, Brazil). To assess COX-2 immunostaining, quantification was performed by immunolabelled cells with the aid of Image J software. For IL-1β immunostaining images, quantification was performed by measuring the % immunolabelled area with the aid of Adobe Photoshop 10. All images were captured with the aid of an optical microscope to the image acquisition system (LEICA, Wetzlar, HE, Germany ).

Quantitative results were expressed as mean ± standard error of the mean (SEM) and the qualitative data (histological scores) were pointed scores and expressed by the median ± minimum and maximum. The results with a parametric distribution were analyzed by Analysis of Variance (ANOVA) followed by post hoc test Tuckey through the program GraphPad Prism version 6.0 (GraphPad Software Inc., La Jolla, CA, USA). The data obtained from non-parametric distribution were analyzed using Kruskal-Wallis test followed by Dunn’s (multiple comparisons). Values of p-value < 0.05 were considered statistically significant.

In summary, CG decreased inflammation, oxidative stress, and intestinal injury induced by 5-FU in the duodenum. The effects of CG were found to be related to COX-2 pathway. The concomitant administration of CG and CLX completely reverted COX-2 and IL-1β immunostaining markers and intestinal injury induced by 5-FU. Thus, we suggest that CG has potential application in the development of novel drugs against intestinal mucositis due to antineoplastic agents. Additionally, we recommend further studies to elucidate the molecular mechanisms related to the effects of GC under pro-inflammatory cytokines expression as well as other possible mechanisms of action involved in the protective effect of CG on chemotherapy-induced intestinal mucositis. 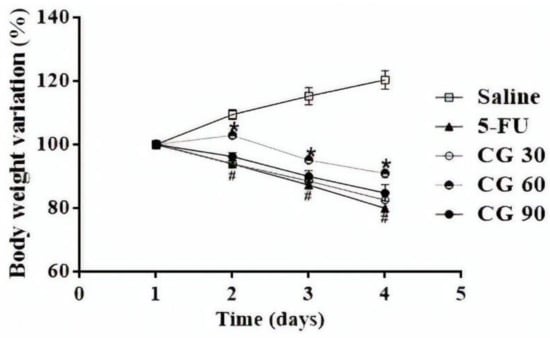 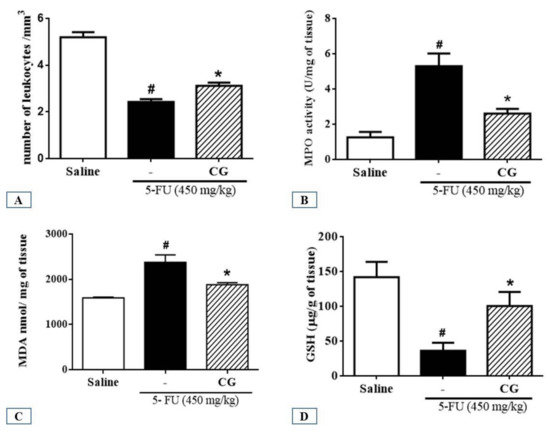 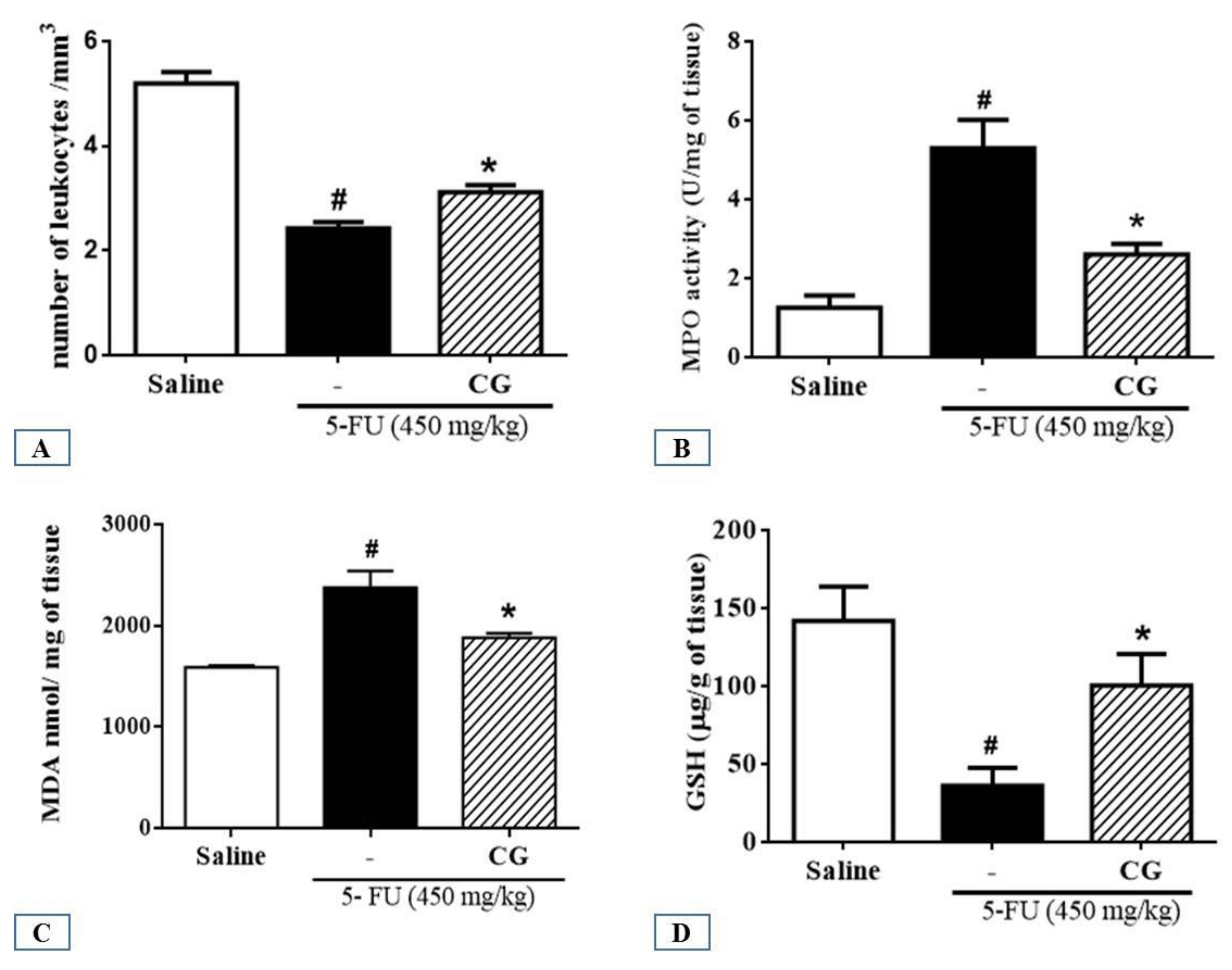 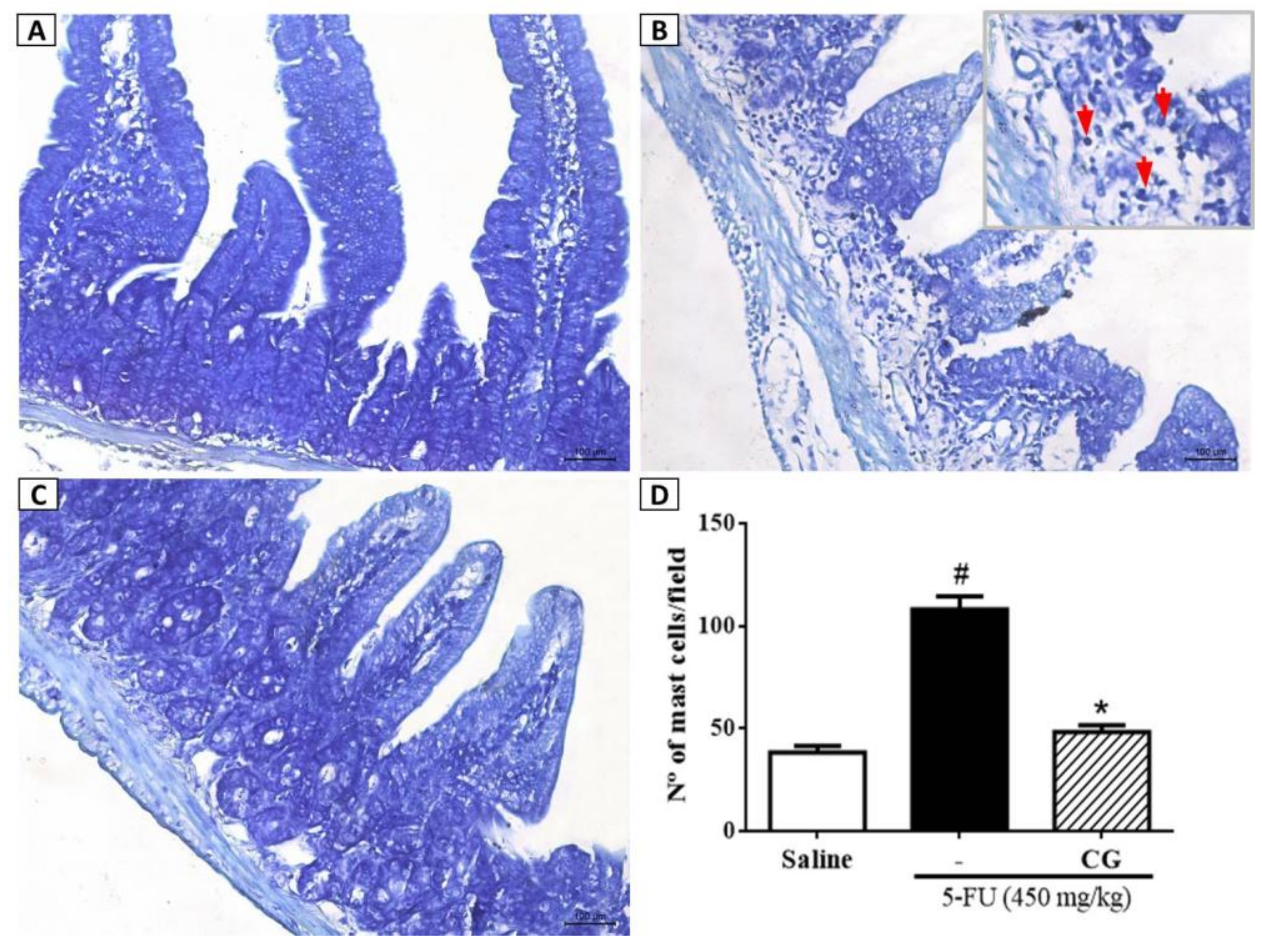 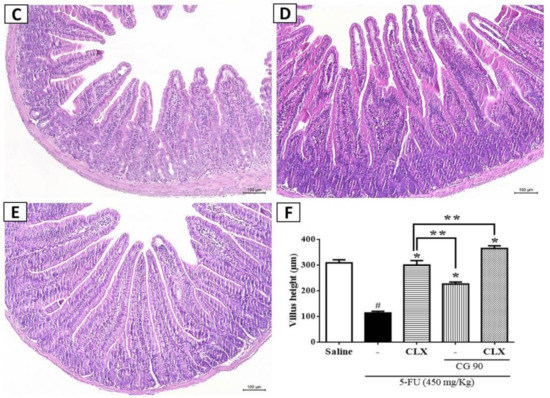