It is well known that unmethylated 2′-deoxycytidine-phosphate-2′-guanine (CpG) sequences alone or in longer DNA and RNA oligonucleotides can act like pathogen-associated molecular patterns (PAMPs) and trigger the innate immune response leading to deleterious cytokine production via Toll-like receptors (TLRs). Clearly, such CpG or CpG-containing sequences in aptamers intended for therapy could present very damaging side effects to patients. Previous antisense oligonucleotide developers were faced with the same basic CpG dilemma and devised not only avoidance, but other effective strategies from which current aptamer developers can learn to ameliorate or eliminate damaging CpG effects. These strategies include obvious methylation of cytosines in the aptamer structure, as long as it does not affect aptamer binding in vivo, truncation of the aptamer to its essential binding site, backbone modifications, co-administration of antagonistic or suppressive oligonucleotides, or other novel drugs under development to lessen the toxic CpG effect on innate immunity. View Full-Text
Keywords: aptamer; CpG; innate immunity; methylation; oligonucleotide; Toll-like receptors aptamer; CpG; innate immunity; methylation; oligonucleotide; Toll-like receptors
►▼ Show Figures 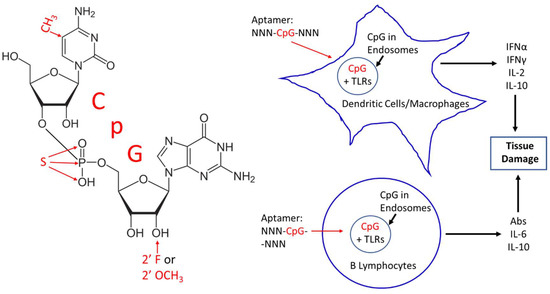