This study investigated the turning characteristics of the more-affected limbs in Parkinson’s disease (PD) patients in comparison with that of a control group, and in PD patients with freezing of gait (FOG; freezers) in comparison with those without FOG (non-freezers) for 360° and 540° turning tasks at the maximum speed. A total of 12 freezers, 12 non-freezers, and 12 controls participated in this study. The PD patients showed significantly longer total durations, shorter inner and outer step lengths, and greater anterior–posterior (AP) root mean square (RMS) center of mass (COM) distances compared to those for the controls. The freezers showed significantly greater AP and medial-lateral (ML) RMS COM distances compared to those of non-freezers. The turning task toward the inner step of the more-affected side (IMA) in PD patients showed significantly greater step width, total steps, and AP and ML RMS COM distances than that toward the outer step of the more-affected side (OMA). The corresponding results for freezers revealed significantly higher total steps and shorter inner step length during the 540° turn toward the IMA than that toward the OMA. Therefore, PD patients and freezers exhibited greater turning difficulty in performing challenging turning tasks such as turning with an increased angle and speed and toward the more-affected side. View Full-Text
Keywords: Parkinson’s disease; freezing of gait; gait; turning; fall; kinematics Parkinson’s disease; freezing of gait; gait; turning; fall; kinematics
►▼ Show Figures 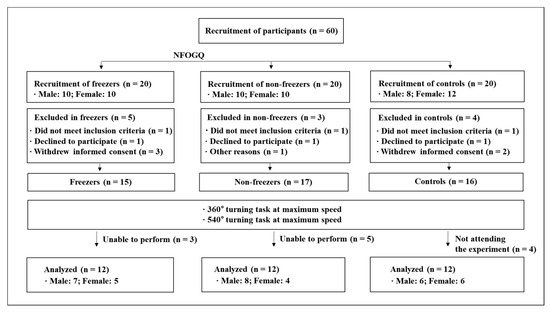