Towards Clinical Translation of LED-Based Photoacoustic Imaging: A Review

Small animals are widely used as disease models in medical research. Noninvasive imaging modalities with functional capability play an important role in studying the disease state and treatment progress. Photoacoustics, being a noninvasive and functional modality, has the potential for small-animal imaging. However, the conventional photoacoustic tomographic systems use pulsed lasers, making it expensive, bulky, and require long acquisition time. In this work, we propose the use of photoacoustic and ultrasound tomographic imaging with LEDs as the light source and acoustic detection using a linear transducer array. We have demonstrated full-view tomographic imaging of a euthanized mouse and a potential application in liver fibrosis research.
Keywords: tomography; photoacoustic; ultrasound; small animal; liver; fibrosis tomography; photoacoustic; ultrasound; small animal; liver; fibrosis

Studying different diseases and developing new drugs in a controlled environment is vital in biomedical research. Small animals are widely used for this purpose, as they allow for controlled disease staging and evaluating the performance of drugs through histopathological validation [1]. Longitudinal monitoring of disease progression and treatment response to drugs can improve the outcome of preclinical studies and can reduce the number of laboratory animal deaths. Imaging modalities can be used for longitudinal monitoring of small animal models. However, there are limitations in using conventional imaging modalities such as MRI, CT, and ultrasound for small animal imaging [2]. Micro MRI is costly and has a slow data acquisition. Micro CT and PET, on the other hand, use ionizing radiation, which hinders longitudinal observations [2]. Ultrasound (US) is a noninvasive and real-time imaging modality but, being a structural imaging modality, in most cases it cannot quantify disease state. Photoacoustic (PA) imaging is a new modality that has functional and molecular capability while being noninvasive and real-time. Thus, PA is considered to be ideal for small animal imaging [3].
PA imaging utilizes pulsed light excitation to induce a temperature rise in optical absorbing structures inside the tissue resulting in thermoelastic expansion and acoustic wave generation. These acoustic waves are detected for imaging [4]. The advantage of PA imaging is that with optical excitation and acoustic detection it combines optical contrast at ultrasound resolution. Additionally, the use of ultrasound transducers enables us to combine PA imaging with conventional US imaging providing co-registered structural and functional imaging of the tissue. Several PA and US imaging systems were successfully demonstrated for small-animal whole-body imaging [3,5,6]. However, the use of a pulsed laser source in these systems not only makes them expensive but demands laser safe small animal labs, eye safety goggles, and additional manpower to operate the system. Therefore, for the wide use of PA imaging in small animal labs, there is a requirement for low cost, compact, safe to use tomographic systems which can be operated by a non-expert. Recent developments in LED-based PA imaging, being compact, low-cost, and safe to use, offer promising avenues to fill this gap [7]. LED-based handheld PA systems were used previously for small animal studies for imaging superficial structures such as tumors [8], wounds [9], and knee joints [7,10]. A limitation of the hand-held PA system using a linear transducer array is the limited view of the target tissue due to the directional sensitivity of the transducer. Additionally, with a small number of LED elements arranged on either side of the transducer, the imaging depth is shallow. We have recently developed a tomographic imaging configuration using a linear transducer array and four LED arrays, to overcome the limited view and to improve the imaging depth [11,12]. The system was originally developed for imaging finger joints for diagnosis and monitoring of rheumatoid arthritis [11].
In this study, we propose the application of our tomographic US and LED-based PA system for preclinical research. First, we demonstrate full-view tomographic imaging of the abdominal region of a mouse. We also compare the results with B-scan images obtained using a handheld probe. Further, we present a potential application of the system in liver fibrosis research. A large number of preclinical studies are currently being performed in small animals to develop antifibrotic therapies. However, the outcome of the preclinical study relies on endpoint histopathological analysis. A noninvasive imaging technique can provide longitudinal monitoring of animals and can improve the study outcome. We present the use of noninvasive and low-cost US and PA tomographic imaging system for liver imaging and compared the outcome with histology images.

An LED-based photoacoustic and ultrasound imaging system, AcousticX (Cyberdyne Inc., Japan), was used in this work. Four LED arrays having 576 elements (36 × 4 array) were used as the light source. We used LEDs having a wavelength of 850 nm, and each array has a pulse energy of 200 µJ with a pulse duration of 70 ns. We used a linear transducer array (128 elements) with a center frequency 7 MHz with 80% bandwidth for acoustic detection. A tomographic imaging configuration with four LED arrays and transducer scanning around the sample was used in this study.
PA imaging using a linear transducer array suffers from low image quality due to incomplete acoustic detection. To overcome the limited view problem in linear array-based imaging, we recently developed a tomographic imaging configuration [11]. The system consists of an imaging probe with a linear transducer array and four LED arrays as shown in Figure 1a. Two LED arrays were placed parallel to the long axis of the transducer, geometrically pointing towards the focus of the transducer (20 mm depth). The other two LED arrays were placed on either side of the transducer along its short axis at an angle of 105° with the transducer surface. These two LED arrays were also placed at an angle of 5° with the imaging plane to minimize the acoustic reflections being detected. In this way, the object to be imaged is illuminated from three sides. The probe is then scanned around the object for tomographic imaging. Based on a simulation study, we have estimated that 16 angular views with an angular step of 22.5° is sufficient to form a full-view tomographic image [11]. The illumination configuration was also developed to provide a significant overlapping region between two angular scans. Interested readers can refer to the work in [11,12] for more details. A 3D printed holder encompassing the transducer and LED arrays to form the imaging probe is shown in Figure 1b. For small animal imaging, the probe was mounted on a motorized linear and circular scanning system, installed on top of a water tank as shown in Figure 1c. A 3D printed small animal holder was used to keep the mouse in place for imaging (Figure 1c).
Male Balb/c mice (8 weeks old) were used in this study. All the animals used in the study received ad libitum normal chow diet and normal water, and were housed with 12 h-light/12 h-dark cycle. All the animal experiments were carried out strictly according to the ethical guidelines for the Care and Use of Laboratory Animals (Utrecht University, The Netherlands). A proof-of-concept study was performed whereby liver fibrosis was induced in one mouse by a single injection of 1ml/kg of carbon tetrachloride (CCl4), and the control animal received olive oil. Mice were euthanized and imaged immediately using the PA and US tomographic system. The hair with the outer skin layer of the animals was removed around the abdominal region before imaging. After the imaging experiments, the livers of the animals were collected and fixed with cryomatrix in isopentane. Fixed livers were sectioned into 5 µm sections and immunohistological analysis using collagen I (fibrosis marker) antibody was performed.
Two scanning techniques were used in this study, involving a combination of circular and linear scans. To obtain a complete tomographic image, a circular scanning of the entire 360° was performed. Combined PA and US imaging were performed at each angular step. Typically, a circular scan takes 42.5 s. However, due to memory limitations of the system, the RF data was saved after each 180° scan and combined in the postprocessing stage. Multiple tomographic images of the abdominal area were obtained by translating the probe to a different location and repeating the circular scan. In the second experiment, the liver region was considered as the region of interest. Here, a limited view tomographic imaging was performed by spatial compounding of B-scan images from three angles (20° steps). In this case, linear scans were performed for the entire length (15 mm length) of the liver at each angular step. Each linear scan took 8.5 s and the 20° circular scan took 2.5 s. The US and PA B-scan images were formed by delay and sum algorithm. For speckle reduction and to improve the contrast of the US image, Bayesian mean filtering using an open source software was used [13]. To form tomographic images, the B-scan images from both US and PA imaging were rotated to the acquired angle and spatially compounded using a custom developed MATLAB program [14]. 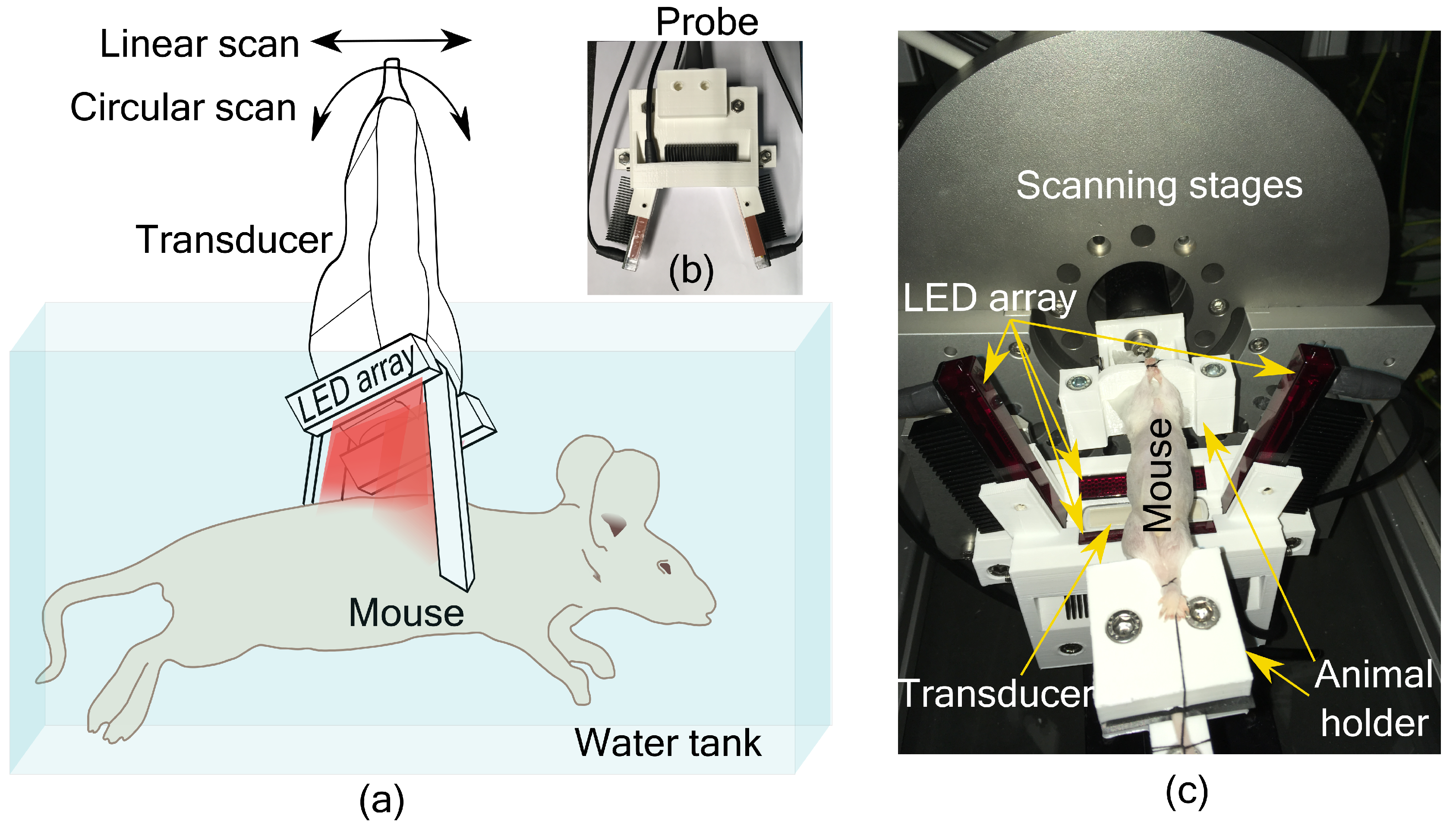