Characterization of an Ultrasonic Local Positioning System for 3D Measurements

Indoor location and positioning systems (ILPS) are used to locate and track people, as well as mobile and/or connected targets, such as robots or smartphones, not only inside buildings with a lack of global navigation satellite systems (GNSS) signals but also in constrained outdoor situations with reduced coverage. Indoor positioning applications and their interest are growing in certain environments, such as commercial centers, airports, hospitals or factories. Several sensory technologies have already been applied to indoor positioning systems, where ultrasounds are a common solution due to its low cost and simplicity. This work proposes a 3D ultrasonic local positioning system (ULPS), based on a set of three asynchronous ultrasonic beacon units, capable of transmitting coded signals independently, and on a 3D mobile receiver prototype. The proposal is based on the aforementioned beacon unit, which consists of five ultrasonic transmitters oriented towards the same coverage area and has already been proven in 2D positioning by applying hyperbolic trilateration. Since there are three beacon units available, the final position is obtained by merging the partial results from each unit, implementing a minimum likelihood estimation (MLE) fusion algorithm. The approach has been characterized, and experimentally verified, trying to maximize the coverage zone, at least for typical sizes in most common public rooms and halls. The proposal has achieved a positioning accuracy below decimeters for 90% of the cases in the zone where the three ultrasonic beacon units are available, whereas these accuracies can degrade above decimeters according to whether the coverage from one or more beacon units is missing. The experimental workspace covers a large volume, where tests have been carried out at points placed in two different horizontal planes. View Full-Text
Keywords: 3D positioning; ultrasonic sensory systems; local positioning systems (LPS); LMS; multilateration; maximum likelihood estimation (MLE) 3D positioning; ultrasonic sensory systems; local positioning systems (LPS); LMS; multilateration; maximum likelihood estimation (MLE)
►▼ Show Figures 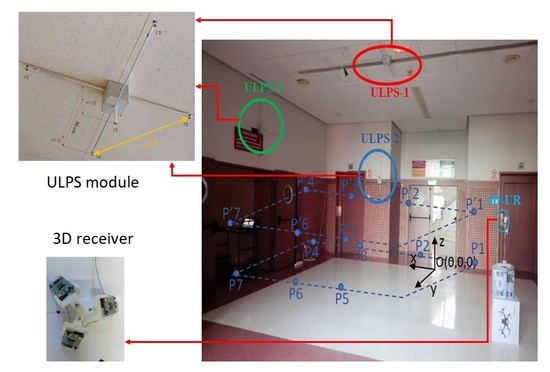