:
Characterization of micro and nanoparticle mass has become increasingly relevant in a wide range of fields, from materials science to drug development. The real-time analysis of complex mixtures in liquids demands very high mass sensitivity and high throughput. One of the most promising approaches for real-time measurements in liquid, with an excellent mass sensitivity, is the use of suspended microchannel resonators, where a carrier liquid containing the analytes flows through a nanomechanical resonator while tracking its resonance frequency shift. To this end, an extremely sensitive mechanical displacement technique is necessary. Here, we have developed an optomechanical transduction technique to enhance the mechanical displacement sensitivity of optically transparent hollow nanomechanical resonators. The capillaries have been fabricated by using a thermal stretching technique, which allows to accurately control the final dimensions of the device. We have experimentally demonstrated the light coupling into the fused silica capillary walls and how the evanescent light coming out from the silica interferes with the surrounding electromagnetic field distribution, a standing wave sustained by the incident laser and the reflected power from the substrate, modulating the reflectivity. The enhancement of the displacement sensitivity due to this interferometric modulation (two orders of magnitude better than compared with previous accomplishments) has been theoretically predicted and experimentally demonstrated.
Keywords:
microcapillary; transparent resonators; interferometry; optomechanics

None of what nanotechnology has achieved in recent years would have been possible without the development of the current advanced nanofabrication techniques, gathered together in a nanofabrication toolbox, allowing for the fabrication of smaller and smaller devices. Nowadays, we can use these nanodevices for many different applications, where sensing applications especially benefit from the unprecedented sensitivities achieved by taking advantage of the new properties at the nano scale [1,2]. In this sense, nanomechanical sensors have been demonstrated as one of the most promising devices. The applications of nanomechanical sensors include biology [3,4], chemistry [5], or even fundamental physics [6]. Ever-increasing control of the nanotechnology toolbox allows for the shrinking of device sizes to the nano scale, which increases the sensitivity and functionality of the devices. However, the measurement of the mechanical displacement of the device ends up hampered by the size itself. These systems include all variations of electrical methods, either capacitive or resistive methods [7], and mechanical readout systems [8], among others. However, probably the most promising in terms of sensitivity and versatility are optical readout methods [9]. The use of optical methods for readouts in nanotechnology, more precisely in nanomechanics, dates back to the beginning of nanotechnology itself, with the invention of atomic force microscopy [10] (AFM), in which the optical beam deflection technique was developed. The sensitivity of optical methods for the measurement of nanometric, or sub-nanometric, displacement of devices can be increased by using the properties of coherent light by means of interferometry. Today, an interferometer is used for the development of the most sensitive displacement sensor in mankind’s history—the Laser Interferometer Gravitational-Wave Observatory (LIGO) experiment, which allowed for the measurement of gravitational waves [11]. However, the optical methods can be used not only for measurement systems, but also for actuation [12,13]. The interplay between photons and phonons ends with a whole new concept, optomechanics [14,15], where the bidirectional energy transfer in between the light and mechanics allows for the active changing of mechanical properties (or optical properties) by the optical field (or by the mechanical displacement).
Optomechanical sensors have special needs in terms of design and fabrication [16]. The main limiting factor in design is that we have to increase the interaction between the photons and the phonons, i.e., the light and the mechanical device. The canonical way to enhance this interaction is by placing the nanomechanical resonator inside an external optical cavity, or even by using an optical cavity sustained by the nanomechanical resonator itself, which is referred to as the optomechanical cavity [17,18]. Originally designed for pursuing the quantum ground state of a mesoscopic object [19,20], optomechanical cavities can be found in multiple forms, such as photonic crystal cavities [21], semiconductor toroids or disks [22,23], and Fabry–Perot cavities [24]. However, the optomechanical phenomena is not strictly restricted to a cavity, e.g., optomechanical amplification and cooling have been demonstrated by using the confined electromagnetic modes inside a subwavelength dielectric structure [25]. In this sense, in order to truly confine the electro-magnetic field at the nano scale, we can use plasmonic devices [26,27], where the excitation of a localized surface plasmon resonance is translated into an absorbed optical power, becoming a hotspot and consequently shifting the mechanical resonance frequency of the nanomechanical sensor. Experimental schemes in which a plasmonic device is used as a sensor have been used for many years, especially in biosensing due to its biocompatibility in terms of materials (usually it requires noble metals) and environmental conditions, as it works perfectly in liquids [28]. Optomechanics in liquids [29] is an emerging field that deals with the external damping imposed by the dragging force exerted by a liquid when an immersed object (the nanomechanical resonator surrounded by the liquid) moves. There are two ways to overcome this issue: to use the liquid as a waveguide, including it in the optical cavity [30], or developing a hollow mechanical resonator [31,32] in which the liquid flows inside the structure while the structure vibrates in a vacuum or gaseous atmosphere [33,34]. In this last case, it is possible to perform mass measurements by tracking the resonance frequency of the flexural modes [31].
In this work, we have developed a novel technique for fabricating a hollow optomechanical resonator. This resonator is based in an optically transparent glass capillary [35,36] which interacts with the electromagnetic field by means of a homemade interferometric system. The use of a coherent light to measure the mechanical displacement opens the door to an optomechanical amplification of movement, boosting the mechanical quality factor, and consequently increasing the frequency resolution by decreasing the noise. However, as we will show in this study, the electromagnetic field distribution, which could be used to exert an optical feedback force, depends on the position along the suspended capillary as a consequence of its geometry, which allows for the control of the amplitude signal by simply displacing the sample. First of all, we are going to theoretically show and experimentally demonstrate the coupling in between the evanescent field emerging from the silica surface with the surrounding electromagnetic field. The optomechanical displacement sensitivity (defined as variation of reflectivity as a function of displacement) will be subsequently theoretically derived and experimentally demonstrated, showing an enhancement when compared with a non-coherent transduction scheme of two orders of magnitude, from 3 × 10−4 µm−1 to 2 × 10−2 µm−1. Finally, depending on the position along the capillary length, we characterize the frequency noise of the system, demonstrating the expected modulation.

In conclusion, we have developed an optomechanical transduction scheme for optically transparent fused silica capillaries. The capillaries have been fabricated by using a thermal stretching technique, which allows the controlling of the final dimensions of the device accurate to 1 µm. These hollow nanomechanical resonators could be used for in-flow mass sensing, where a liquid flows inside the capillary, carrying analytes to be detected. Therefore, a very sensitive mechanical displacement technique is necessary. Here, we show how the light coupled into the fused silica capillary walls interact with the surrounding electromagnetic field distribution, a standing wave sustained by the interference of the incoming illuminating light and the reflection from the silicon substrate. The interference of the evanescent field from the fused silica and the standing wave ends up with a modulation of the sensitivity to mechanical displacement depending on the substrate–capillary separation. The sensitivity of our optomechanical transduction technique is good enough to account for a deviation of less than 1% of the cylindrical shape of our capillary due to the fabrication process. This technique opens the door for a plethora of novel sensing applications for measuring not only the mass of analytes flowing inside vibrating capillaries, but also their optical properties.

D.R., J.T. and M.C. conceived and designed the work. A.M.-P., D.R. fabricated and characterized the devices and performed the experiments. D.R. and A.M.-P. performed the simulations. D.R. wrote the manuscript with input from all authors. All authors analyzed the data, discussed the results, and commented on the manuscript.

This work was supported by the European Union’s Horizon 2020 program under European Research Council grant 681275—LIQUIDMASS-ERC-CoG-2015 and by the Comunidad de Madrid (iLUNG B2017/BMD-3884)—co-funded by FSE & FEDER and the Spanish Science Ministry (MINECO) through project MOMPs TEC2017-89765-R. All authors acknowledge the service from the X-SEM Laboratory at IMN and MINECO under project CSIC13-4E-1794, also with support from EU (FEDER, FSE). 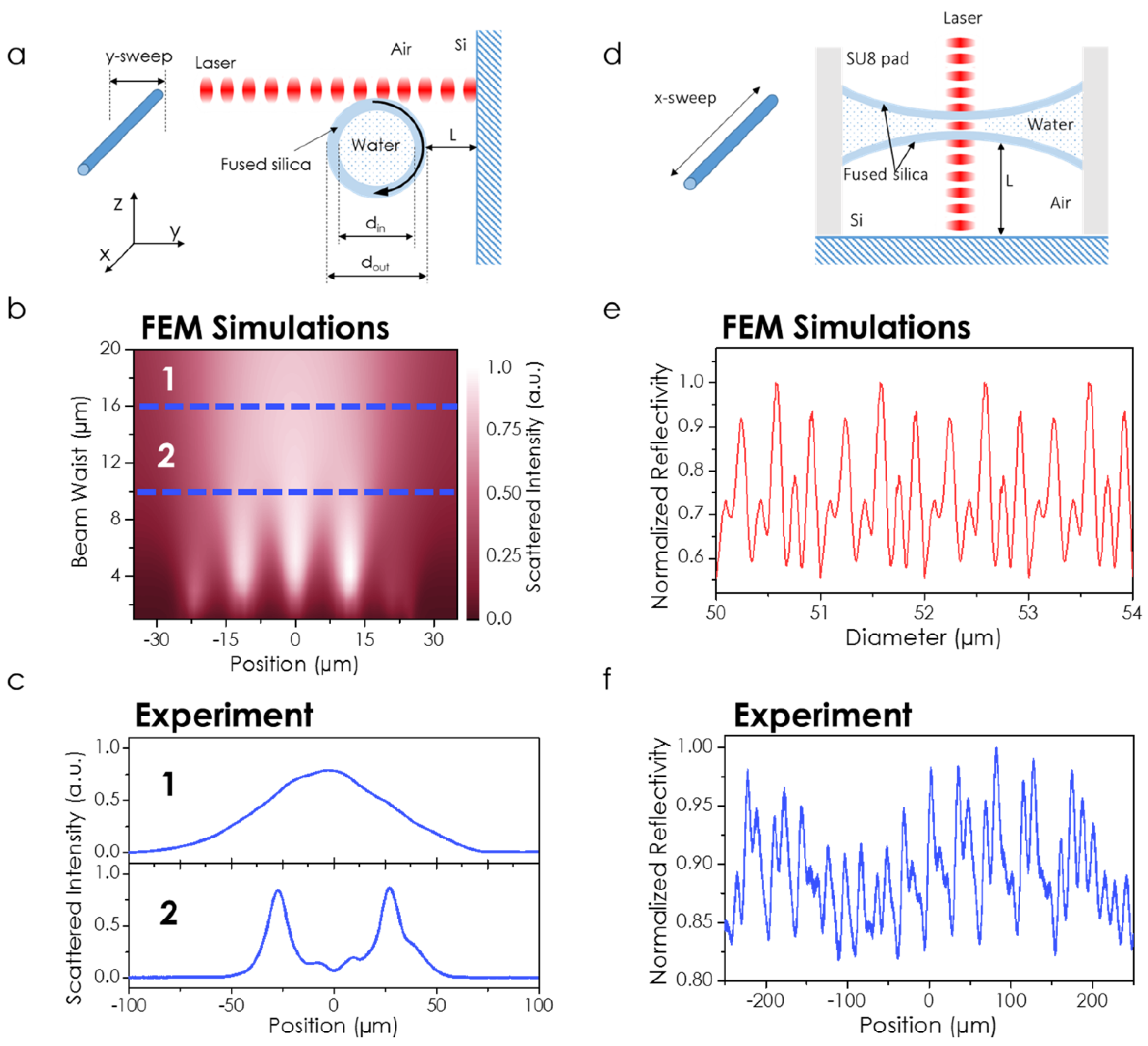 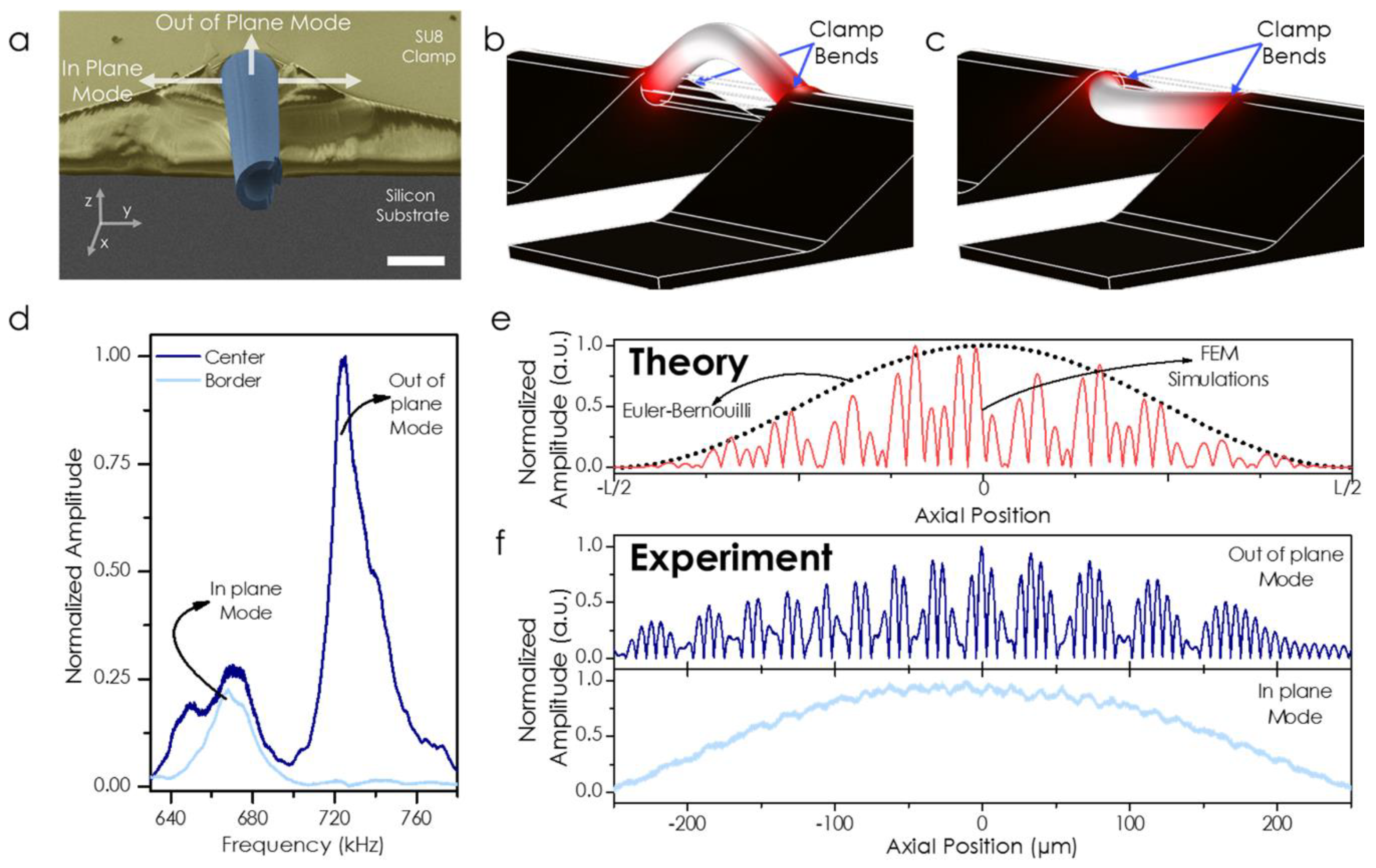