This work presents an improved visual odometry using omnidirectional images. The main purpose is to generate a reliable prior input which enhances the SLAM (Simultaneous Localization and Mapping) estimation tasks within the framework of navigation in mobile robotics, in detriment of the internal odometry data. Generally, standard SLAM approaches extensively use data such as the main prior input to localize the robot. They also tend to consider sensory data acquired with GPSs, lasers or digital cameras, as the more commonly acknowledged to re-estimate the solution. Nonetheless, the modeling of the main prior is crucial, and sometimes especially challenging when it comes to non-systematic terms, such as those associated with the internal odometer, which ultimately turn to be considerably injurious and compromise the convergence of the system. This omnidirectional odometry relies on an adaptive feature point matching through the propagation of the current uncertainty of the system. Ultimately, it is fused as the main prior input in an EKF (Extended Kalman Filter) view-based SLAM system, together with the adaption of the epipolar constraint to the omnidirectional geometry. Several improvements have been added to the initial visual odometry proposal so as to produce better performance. We present real data experiments to test the validity of the proposal and to demonstrate its benefits, in contrast to the internal odometry. Furthermore, SLAM results are included to assess its robustness and accuracy when using the proposed prior omnidirectional odometry. View Full-Text
Keywords: visual odometry; omnidirectional images; visual SLAM; feature matching; mapping visual odometry; omnidirectional images; visual SLAM; feature matching; mapping
►▼ Show Figures 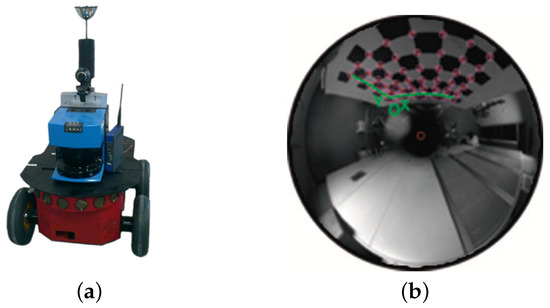